Police are demanding that Nashat Milhem's family ensures that impending funeral will not breed incitement of terror activity. 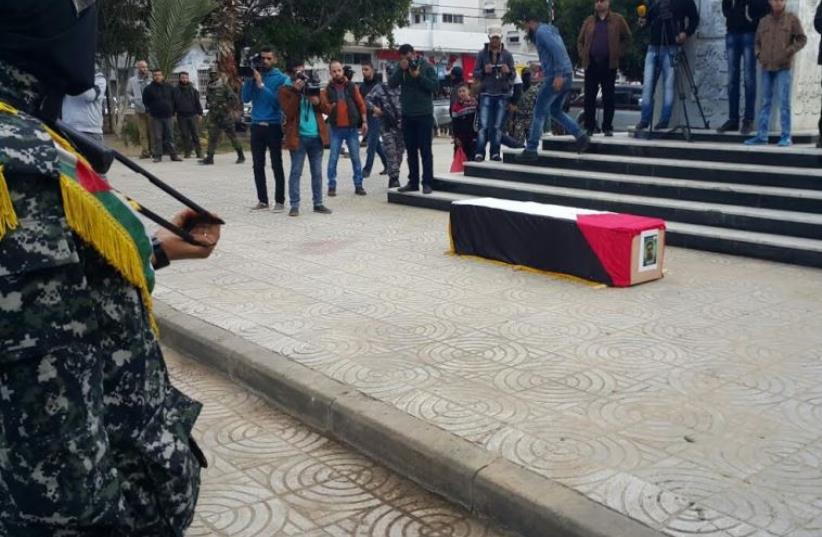 Mock funeral for Nashat Milhem in Gaza, January 10, 2016
(photo credit: FACEBOOK)
Advertisement
Public Security Minister Gilad Erdan stressed in a statement on Monday that as long as the family of the gunman in the January 1 Tel Aviv shooting,  Nashat Milhem, complies with Israel's conditions his body will be released for burial. Police have demanded the family ensures that Milhem's impending funeral will not turn into a breeding ground for incitement of terror activity.  On Sunday Erdan delayed the release of Milhem's body and demanded that police take preventative measures against an outbreak of violence.Security forces killed Milhem on Friday concluding a week-long manhunt for the perpetrator that shot and killed two people in a Tel Aviv bar along with the murder of a taxi driver in the city. Also on Sunday a terrorist organization held a symbolic funeral for the shooter in Gaza City. The military wing of the Palestinian Popular Resistance Committee eulogized Milhem as a matyr as they marched in the absentee funeral ceremony, according to Palestinian agency Ma'an. The group held the funeral "in support of the intifada, its activists and the martyrs who fell," Ma'an quoted an Al-Nassar Salah al-Din Brigades spokesman as saying.The gunman left two killed and eight others wounded on Dizengoff street in an attack in central Tel Aviv on January 1. He immediately fled the scene and killed taxi driver Amin Sha'aban in North Tel Aviv. The Tel Aviv shooter's father and brother were taken into custody and questioned after Milhem's father was reported to have identified the shooter as his son to the police. The manhunt that ultimately culminated in the shooting of Milhem in his home town of Arara concluded the week-long pursuit of the suspect.