The PLO claims its calls for international protection have so far been ignored. 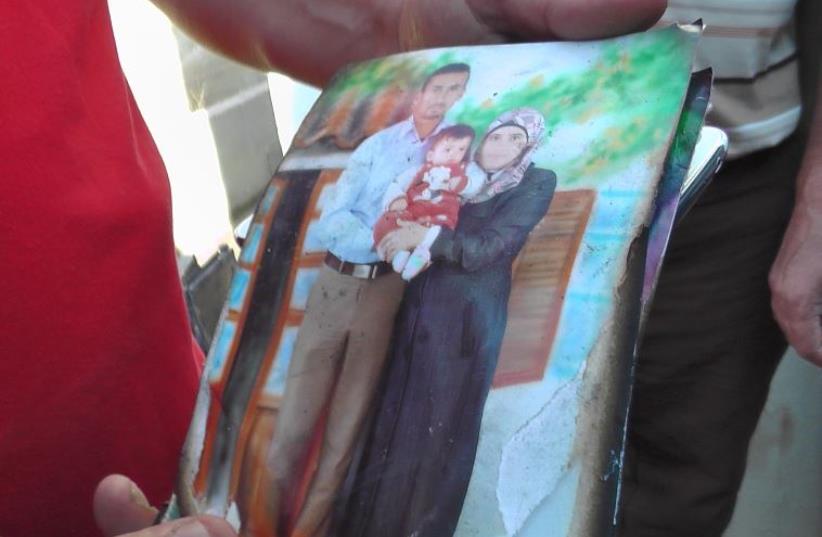 A burnt photograph of the Dawabsha family
(photo credit: YESH DIN)
Advertisement
The PLO called on the international community to protect Palestinians from Israelis in the aftermath of a terror attack by Jewish extremists in the West Bank village of Duma in which a toddler was killed and four others were wounded.“Over a year ago [Palestinian Authority] President Abbas requested international protection for Palestinians, a call that has been ignored so far,” said PLO Secretary-General Saeb Erekat on Friday just hours after the attack. “Today we can see the consequences. We call upon the international community to end its policy of empty statements and to finally do something to protect Palestinians,” he said.
Terror attack in Duma
The Israeli government is “fully” responsible for the death of Ali Saad Dawabsha, a toddler who was a year-and-a-half old, said Erekat.“This is a direct consequence of decades of impunity given by the Israeli government to settler terrorism. Since 2004, over 11,000 settler attacks have taken place against Palestinian homes, cars, churches, mosques, trees and others with full impunity,” he said.Continued settlement building, incitement against the Palestinian people and calls to recognize Israel as a Jewish state have helped “pave” the road for this act, Erekat said.“This is the consequence of a culture of hate funded and incentivized by the Israeli government and the impunity granted by the international community,” Erekat added.Prime Minister Benjamin Netanyahu and politicians across the political spectrum condemned the attack."I am shocked over this reprehensible and horrific act,” the premier said.“This is an act of terrorism in every respect. The State of Israel takes a strong line against terrorism regardless of who the perpetrators are,” he said.Netanyahu added the security forces were instructed to use all means at their disposal to find the “murderers” and bring them to justice.“The Government of Israel is united in its strong opposition to such deplorable and awful acts,” Netanyahu said. “On behalf of the citizens of Israel, I would like to share in the sorrow of the family of Ali Dawabsha and wish a quick recovery to the family members who were injured,” Netanyahu said.MK Moti Yogev (Bayit Yehudi) said the attack which killed Ali and injured his four-year old brother and his two parents was a “terrible thing.”Those who executed the attack do not represent the population that lives in Judea and Samaria, he said. From past briefings by security forces, he said, he knows that at most there are only some 30 extremists in the whole country who would engage in any kind of price tag activity, he said.