Experts weigh in: How can Israel quash this wave of terror?

Former national security adviser Uzi Dayan: Now is the time to fight back, rather than talking about long-term issues. 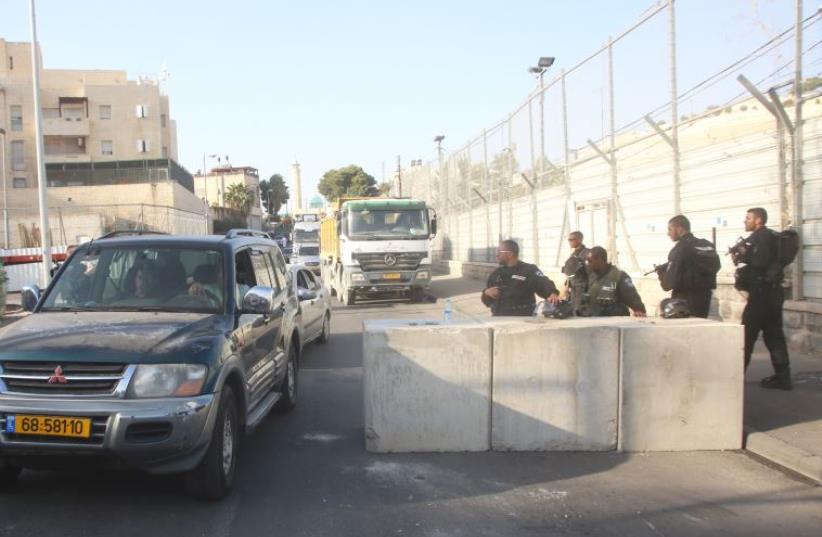 Concrete barriers set up in east Jerusalem neighborhoods
(photo credit: MARC ISRAEL SELLEM/THE JERUSALEM POST)
Advertisement
The response to the current wave of Palestinian terror against Israeli civilians must comprise both the security and political tracks, says Dr. Shaul Shay, a leading expert of local and international terrorism in Israel, of the Institute for Policy and Strategy.On the political level, officials are making an effort to pressure the Palestinian Authority and also Arab Israeli leaders, as well as urging elements in the Arab and Muslim world to call for an end to the violence and quash the incitement, Dr. Shay notes. He opines that the UN and human rights groups should also call for an end to the violence, "which I have not heard happening," he laments.Dr. Shay believes that on the security level, more needs to be done. "Close the West Bank - don't allow workers to enter Israel from the West Bank," he advocates.
How can Israel put an end to this wave of terror?
Shay supports the decision made by the security cabinet on Wednesday to seal off flash-point Palestinian neighborhoods in east Jerusalem, from where terrorists are emerging, in order to quash their abilities to carry out attacks. He also backs the government decision to destroy the homes of terrorists’ families, believing that this measure has good deterrence value as it “it will make them think twice if they know their family will pay the price.”He adds that there need to be more intensive intelligence efforts to locate the main inciters and to to deal with them. He asserts that concrete steps must be taken against the northern branch of the Islamic Movement in Israel. “There is no doubt that incitement has an influence and every time a terrorist is killed and is made into a martyr and glorified, this encourages more and more attackers to do it,” he says. He notes that lone-wolf terrorists who are unaffiliated with any terror group prior to the attack, are often taken under the auspices of terror organizations following an attack.Dr Ofer Israeli, a lecturer and researcher at Herzliya's Lauder School of Government Diplomacy and Strategy agrees that the northern branch of the Islamic Movement is a key issue in tackling the latest round of violence. He believes that Prime Minister Benjamin Netanyahu's move to try to outlaw the Islamic Movement came a little too late, and that had he done this two weeks ago, Israel may not have found itself in the present situation."It took time for the government and security bodies to understand that this is not a temporary, short period of unrest, but something larger than that," he says. "If they don't take the right steps to stop the attacks, we may see an escalation of the situation."Dr. Israeli expresses the belief that fear over the response of the international community, and the response of some Israeli forces, is preventing them from taking all the measures it deems necessary to stop the terror attacks."For instance - it's necessary to do what they're now doing in Jerusalem," he says of the closed-off neighborhoods in east Jerusalem. "I think they understood this before but they are afraid from the inside and the outside."He says, however, that this kind of action will be harder to do in other areas of Israel, which could mean that the high frequency of attacks or attempted attacks could move to other locations, such as southern Israel or areas close to the triangle and the Galilee.Former national security adviser and ex-deputy chief of staff Maj.-Gen. (res.) Uzi Dayan adds another dimension to this - the societal one. He stresses the importance of the public getting on with their daily lives. "The terrorists should die, but the people should continue to live,' he tells The Jerusalem Post. "I don't think a group of teenagers -- even if they are terrorists-- should hurt the public morale or economy." He says Israeli civilians should continue with their daily routines, should continue to work, study and go to cultural events; those who have weapons licenses should carry them with them, he adds.  He also opines that the constant stream of information, the open line from the IDF straight to the public is unhealthy, though he acknowledges that "it's a free country and obviously I can't stop it - but I don't think it's positive."Dayan states that this is not the time to talk about long-term issues, but to fight back. He disagrees with proponents of returning to the negotiating table during this time, noting that he was head of the Israeli security committee in negotiations with the Syrians, Palestinians and Jordanians and recalls that at a crucial point in peace talks under late prime minister Yitzhak Rabin, there was a bad spate of terrorism. Dayan believes that the government, police and and IDF are implementing the rights measures to put an end to the terror attacks, asserting that IDF forces can treat certain neighborhoods in east Jerusalem during this time in the same way that they do Hebron or Nablus. He supports closing off certain areas, guarding neighborhoods and public transportation and putting curfews into place in some areas. He also agrees with above-mentioned punishments for the families of terrorists as a method of deterrence. Dayan asserts tthat if the security forces continue doing more of the same to prevent attacks and catch terrorists, "it might take some weeks, but then I think it will be over."He warns that if the issue isn't fought effectively, the danger is that "there are no more local events in the Middle East." "Everything can become a regional issue," he says, pointing at Hamas in Gaza and Hezbollah in the Golan Heights. He notes that there is relative calm in the West Bank currently, and Israel should work to prevent Fatah from joining this "terror wave."