Bouab recounts that before Hamas came to power in Gaza he owned four textile factories in the Karni industrial zone, which provided 2,000 jobs. 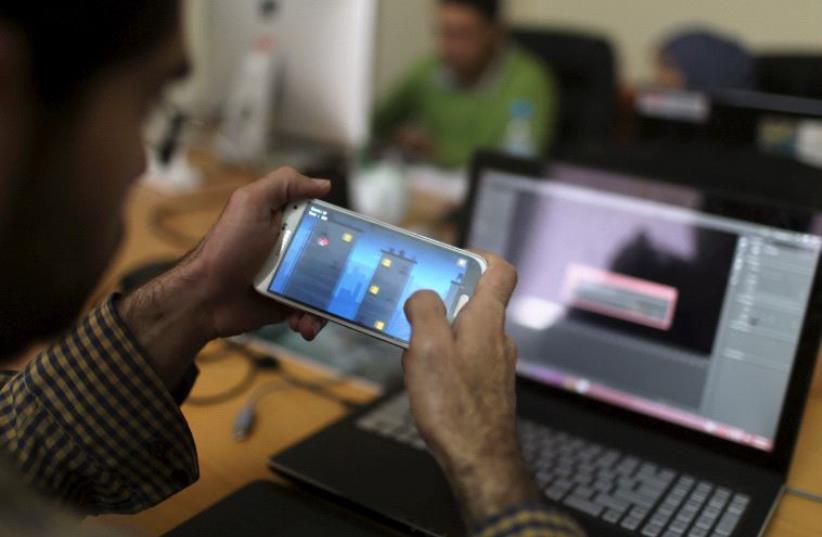 A young Palestinian entrepreneur displays on his mobile a game that he developed at Gaza Sky Geeks office, in Gaza City January 18, 2016.
(photo credit: REUTERS)
Advertisement
"The poor and the hungry try to agitate not because they love disturbances but because they want to be taken into account and paid attention to," says Gaza businessman Nabil Bouab.Bouab agreed to be interviewed by "Globes" following the article featuring Israeli businessman Shlomi Fogel, the owner of Ampa and Israel Shipyards. Well connected in the Arab world, Fogel called on Israeli businesspeople and their counterparts in Gaza and the Arab world, "to come to Gaza now," and be partners in setting up five or six industrial zones and free trade areas along the Israel-Gaza border, on the Israeli side. Sources involved in the initiative claim that Hamas looks on it positively due to the economic pressures from Gaza residents who suffer a 60% unemployment rate.The initiative depends on the allocation of land by Israel for the industrial zones along the fence and ensuring swift access to these zones from Gaza. The businessmen are interested in the Israelis controlling the security of the joint zones.Bouab and Fogel believe that the industrial zones can provide a livelihood for 60,000 families. "We are talking about textile and furniture factories but we also need to find jobs for university graduates," Bouab said, "We have engineers without work. We also have people that can work in computer software. Israel is one of the world's most advanced countries in these fields."Fogel says that the idea has aroused interest amongst businesspeople in plastics, agriculture, assembling electronic components, and metal work. He said, "There are good metal workers and building workers and wage rates in Gaza are about $5 a day. In Israel they will of course receive the minimum wage."Fogel adds that it would be possible to take advantage of the readiness of European countries to invest in creating jobs for potential migrants to their countries in order to prevent the incentive for them to immigrate to Europe."There are many people prepared to come and invest," said Bouab. "In Gaza you can hire a worker for $400. That's a lower salary than in China. Even in Egypt it would cost you more. We have 200,000 people ready to work - they just need the conditions. I was the first person to open a factory in the Karni industrial zone and in less than a year 50 factories were opened there that employed tens of thousands of workers. I want there to be peace because my interests depend on peace and quiet. I have no control over a 22 year old person that has no hope and not a single shekel in his pocket. That's explosive material. Why shouldn't we have another tens of thousands of people whose interest depends on keeping the peace? There is no security without an economy."The political leaders in Gaza won't oppose such cooperation?"On the contrary, they support it. It's important to comer to Gaza. Who opposes something that is good? They (Hamas) are part of the Palestinian people in Gaza. We'll begin with economic peace and after that genuine peace."Bouab recounts that before Hamas came to power in Gaza he owned four textile factories in the Karni industrial zone, which provided 2,000 jobs. The factories were closed down in October 2007. He said, "There is nothing in Gaza today - no economy. It has been completely destroyed. Gaza's people have learned the hard way that nobody is going to help them and so I think looking to their Israeli neighbor is the right direction. They all say that they are ready to give everything to economically support their families and to feed their children with dignity."He added, "The Israeli side allows people to live, through joint industrial zones. Let's re-operate the Karni industrial zone where I had four Israeli partners whom I worked with from 1999 to 2007 and they are prepared to come back. But the Israeli government must understand that not everything is security. I'm not against security. The security is also for me because security is for everyone and not just the one side. The Palestinian side is concerned about security today and keeping the peace in order to earn a living. But if you control security and there is nothing in exchange then that's worth nothing - ultimately it is certain to blow up if people have nothing to fee their children."Gaza's electricity supply is currently restricted to 4-6 hours per day. "I'm now sitting in darkness," said Bouab. "We have a generator but the supply of diesel stopped and my wife told me to look after the diesel that we have at home for an emergency. We've survived for almost ten years like this. Three wars."Gaza's per capita GDP is $800 per year compared with $6,500 in the West Bank (Judea and Samaria) and $37,000 in Israel.Fogel said, "With barely a miserable $800 per year there is no doubt that 2 million Gaza residents will try again and again to shake the tree and disrupt Israel.He also reveals that he is part of a group of businesspeople including Palestinians from Gaza and Ramallah, Egyptians and Israelis that have got together and are trying to promote an organized rehabilitation plan for northern Sinai and Gaza."Fogel said, "Egypt has a border with Gaza and they are partners on this matter and they also need to get something out of this. Everybody needs to get something otherwise it won't get off the ground."Bouab owns a textiles factory in Egypt that employs 750 people. In order to reach his factory he must travel via Israel and Jordan and then to Egypt. He said, "Israel currently let's in almost 2,000 Gaza residents. There is almost a blockade. The Egyptian border is completely closed. People are beginning to compare Egypt with Israel and are even saying that Israel is better than Egypt."