What should you do if you hear a rocket siren? 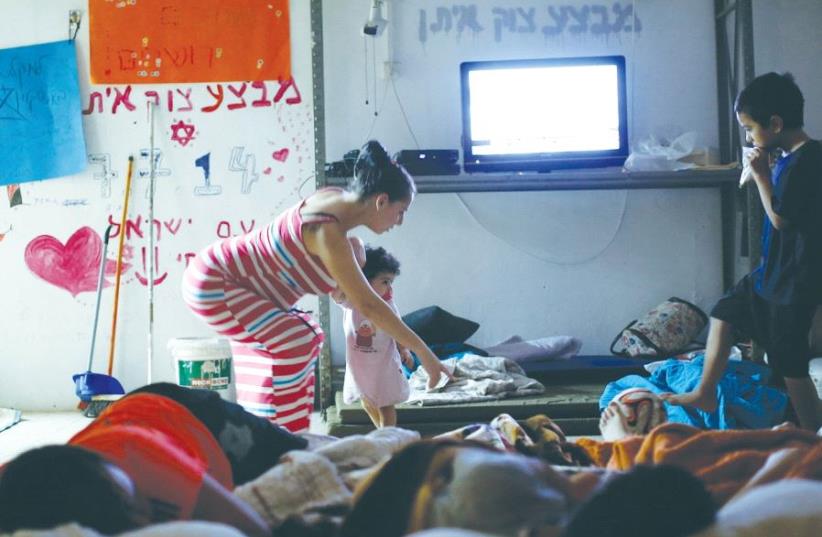 A MOTHER puts her children to bed in a public bomb shelter in Ashkelon during the 2014 Gazan war
(photo credit: REUTERS)
Advertisement
Israelis woke up to rockets that have begun to soar into the south and central part of Israel from Gaza on Tuesday. Meanwhile, the Labor Ministry, along with the Home Front Command and National Emergency Services want to make sure the citizens of Israel remain calm and safe. Welfare institutions are currently holding exercises and preparing for multiple different scenarios to help protect families across the nation during an emergency situation, according to the Labor Ministry. They have already opened a "situation room" in the south where people are welcome to come. The government is currently working on opening a room in the center of Israel as well. A spokesperson from the ministry said that tens of thousands of citizens around the country come from a population that needs extra attention during emergency situations, especially when it comes to children, those with disabilities and the elderly. With their preparation they are able to help these people and ensure everyone's safety. So what should you do if you hear sirens go off around you?A representative from NGO Forum for Public Health in Israel says, "It is important to remember that children look to their parents when something unclear and stressful happens - like an alarm. So what you, as a parent, put out is what the children understand and experience." A parent must recognize the noise hand the tension in the air. It's clearly unpleasant to the entire family and even though the children may be scared, their feelings need to be validated, she continues. "It is important to reinforce positive values: a sense of 'togetherness' secured in a room or the home, in the families personal space and safety," she continued.The NGO also recommended to talk less and embrace more. What's most important is to make the shelter a safe, pleasant place for the family. Put games and other activities you can do together to keep yourselves entertained and preoccupied. Food and music are also said to reduce anxiety in these situations. However, the representative says it's best to avoid the TV and Radio, especially the news which can upset the children. It's also imperative that the parents take time to reduce their own stress. One can take a shower, dance to music or do another fun activity while the sirens are not going off.