Human rights groups have condemned Hamas for carrying out executions in the past. 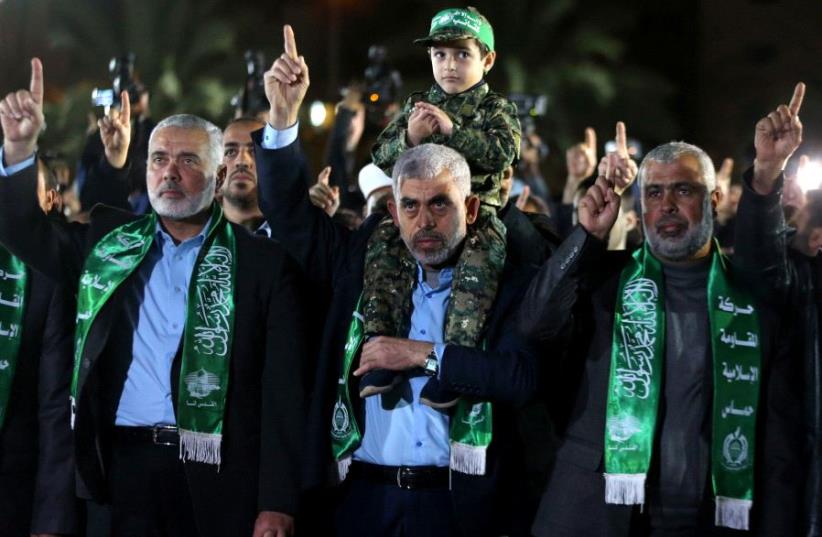 The son of senior Hamas militant Mazen Fuqaha sits on the shoulders of Hamas Gaza Chief Yehya Al-Sinwar during a memorial service for Fuqaha, in Gaza City March 27, 2017
(photo credit: REUTERS)
Advertisement
Hamas-appointed Attorney-General Ismail Jaber said on Wednesday that the suspected killer of leader Mazen Fuqaha, along with his two alleged accomplices, will be executed on Thursday.Fuqaha, formerly a senior member of the Hamas military leadership, was mysteriously assassinated on March 24 near his home in the Tel al-Hawa neighborhood of Gaza City.The suspected killer and the two alleged accomplices were sentenced to death on Sunday by a Hamas military court, which said they took part in his assassination at Israel’s behest.According to Jaber, the three will be executed in the presence of officials and local leaders.Hamas executed three others accused of collaborating with Israel in an unrelated case in early April.Human-rights groups have condemned Hamas for carrying out executions.“The death penalty is a barbaric practice that has no place in a modern state,” Sarah Leah Whitson, executive director of the Middle East division of Human Rights Watch, said in April.Since taking over the Gaza Strip in an armed coup in 2007, Hamas has executed 25 people sentenced to death by its courts, according to the Palestinian Center for Human Rights.