Hezbollah reacts to IDF drill: We are ready for any act of Israeli stupidity

Lebanon did not remain silent following the launch of a massive IDF drill simulating a possible war, with a Hezbollah official threatening that "the Israelis won't succeed in surprising us." 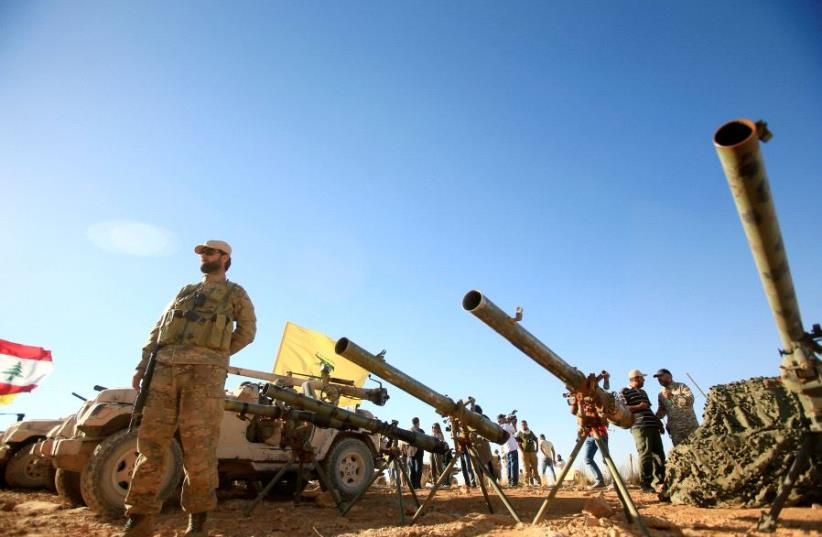 A Hezbollah fighter stands in front of anti-tank artillery at Juroud Arsal
(photo credit: ALI HASHISHO/REUTERS)
Advertisement
Lebanon did not remain silent following the start of a massive IDF drill simulating a war, with a Hezbollah official threatening that “the Israelis won’t succeed in surprising us.”A senior Hezbollah official taunted Israel on Tuesday, saying that “we are ready for any attack or Israeli stupidity.”The official, who was quoted by several Lebanese media sources but was left unnamed, spoke in reaction to the IDF’s announcement on Monday that it had begun its biggest drill in 20 years, in preparation for a possible war against the terrorist organization.“We [Hezbollah] are fully alert and ready at any time for any possible scenario,” the official was quoted as saying. He continued, “The Israelis won’t succeed in surprising us, because Israel knows full well [what] Hezbollah’s capabilities are after the loss it suffered in 2006 [in the Second Lebanon War], which deterred the IDF.”The official had also said that the IDF was carrying out “the large military drill” due to “Hezbollah’s military capabilities.”Other Hezbollah associates, who were also unidentified by Lebanese media, were quoted as speculating that Israel is carrying out the exercise in order to prepare to face a renewed battle. The Jewish state is going to be forced to confront an entirely different and strengthened entity than the one it faced a little over a decade ago during the Second Lebanon War, they threatened.IDF commanders have repeatedly affirmed this claim in recent years, saying that Israel has indeed been preparing to contend with an enemy that no longer fights in guerrilla-style groups and has amassed a significant arsenal of weapons as well as knowledge and training.According to the military, the exercise is set to last two weeks and will focus on countering Hezbollah’s increased capabilities. Thousands of soldiers and reservists from all different branches of the IDF (cyber, intelligence, ground forces, the air force and the navy) are going to coordinate their operations as during wartime, simulating an attack by Hezbollah.
Hezbollah official says Israel is closer than ever to its demise (credit: MEMRI)
The terrorist organization’s leader Hassan Nasrallah has made numerous threats in the past few years, promising that Hezbollah has at least 100,000 rockets pointed at “the Zionist entity” and ready to strike at any time.Following the IDF’s announcement about the exercise, Lebanese media discussing it at length. The Al-Manar website, which is affiliated with the terrorist group, described the drill on Tuesday as “huge maneuvers by the Israeli Army simulating an infiltration of Hezbollah [into Israeli territory].”Al-Akhbar, a Beirut-based daily, used similar words, saying that Israel is preparing to face “the second largest military in the Middle East.”A centerfold analysis piece described the drill at length, quoting an anonymous Israeli official and mocking Israel for what it deemed “its obvious pressure,” which supposedly showed Israel was “clearly worried about its massive failure in 2006.”But Israeli officials and security analysts seem to remain unfazed by Hezbollah’s verbal attacks, stating that the terrorist group is embroiled in other conflicts, in particular the Syrian civil war, and is unlikely to make good on its threats anytime soon.IDF Chief of Staff Lt.-Gen. Gadi Eisenkot has said that while Hezbollah will probably continue to lash out with various threats, it isn’t ready for war with Israel yet. Hezbollah is going through “an internal crisis,” he said in 2016. “[They are going through] an economic crisis and a leadership crisis,” he pointed out and promised that Israel, in the meantime, is training and is ready should it be faced with an escalation.