The ISIS members were 200 meters from the Israeli border, the army said.

IDF searches the area after attacking ISIS fighters in Golan Heights, August 2, 2018 (IDF Spokesperson's Unit)
Advertisement
Israel struck and killed seven ISIS fighters who were 200 meters from the Israeli border in an air strike on the Syrian-held Golan Heights overnight Wednesday, the army confirmed on Thursday At 10:30 p.m., IAF jets fired at and hit seven armed terrorists who belonged to the Islamic State group’s Yarmouk Martyrs Brigade. They had crossed the Alpha line in the Syria-Jordan-Israel border triangle area and were approaching the border fence.The militants had been tracked by Israel for several kilometers and were hit before they infiltrated into Israel, preventing what the army said could have been a “grave incident.” 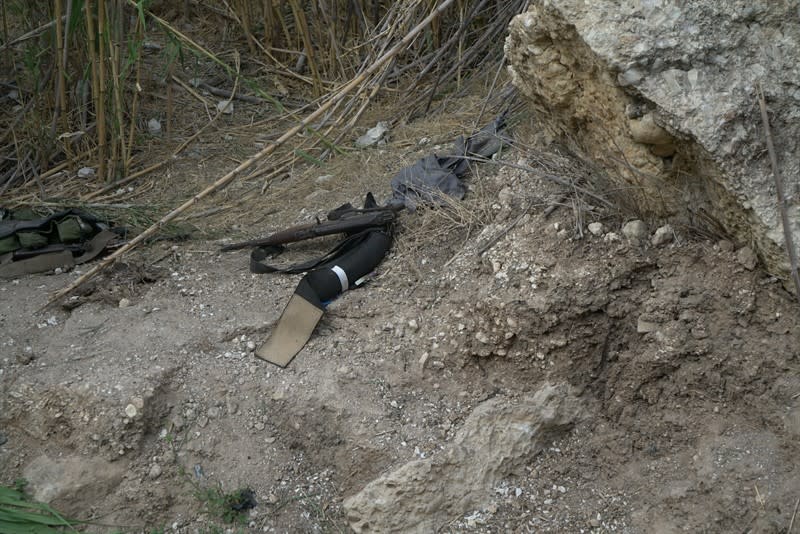 A Kalashnikov rifle, found between the Alpha line and Israel's border with the Syrian Golan Heights (IDF SPOKESPERSON'S UNIT)The next morning, troops from the Nahal Brigade searched the area and found the terrorists’ bodies as well as five AK-47 assault rifles, bullet-proof vests, grenades and what looked like suicide belts.While the army “cannot unequivocally” say what the cell planned to do, it is believed that they were planning an attack against Israel. Nonetheless, the army stressed that there had been no threat to Israeli communities or troops in the area during the incident.“The Assad regime is responsible for everything that occurs in Syrian territory, and [for] anything that is carried out against Israel,” the army said.That incident occurred as Syrian regime forces are in the final stages of their offensive to recapture the Syrian Golan Heights from rebel groups and fighters from the Yarmouk Brigade in southwestern Syria.“As a result of that, we see ISIS fighters dispersed throughout the area near the border, fleeing areas reconquered by Assad,” said IDF Spokesperson Brig.-Gen. Ronen Manelis.According to Jordan’s state news agency Petra, a number of ISIS militants who tried to approach its northern border with Syria were killed by Jordanian troops.In clashes that lasted close to 24 hours, Jordanian troops engaged ISIS militants and “applied rules of engagement... Members of the Daesh [Islamic State] gang were forced to retreat inside Syria and some of their members were killed.”Israeli and Syrian officers are reported to have indirectly met several times on the Golan Heights through UN intermediaries at the request of Russia to discuss the return of Assad regime troops to the area.According to Russia’s Interfax news agency, Russian military police will be deployed along the Golan Heights border between Syria and Israel in eight surveillance posts which will be established to prevent an escalation between the two enemy countries.“With the aim of preventing possible provocations against UN posts along the ‘Bravo’ line, a deployment of eight observation posts of Russia’s armed forces’ military police is planned,” Sergei Rudskoi, a senior Defense Ministry official was quoted by Interfax as saying.Moscow intervened in the Syrian conflict in September 2015. The head of Russia’s Military Police Directorate Vladimir Ivanovsky visited Israel in June and met with senior officials and several senior IDF officers to discuss the issue of the withdrawal of all Iranian troops and militias from Syria’s Golan Heights near the border with Israel.Israel took control of the 1,200 square kilometers of the Golan Heights from Syria during the Six Day War in 1967 and unilaterally annexed the area in 1981. According to Israeli intelligence estimates there are thousands of Iranian advisers and Iranian Revolutionary Guard Corps officers in Syria; some 9,000 Shiite militia fighters from Afghanistan, Pakistan and Iraq; and another 7,000 Hezbollah fighters.