If Israel admits Syrian refugees, would it need to welcome Palestinians as well? 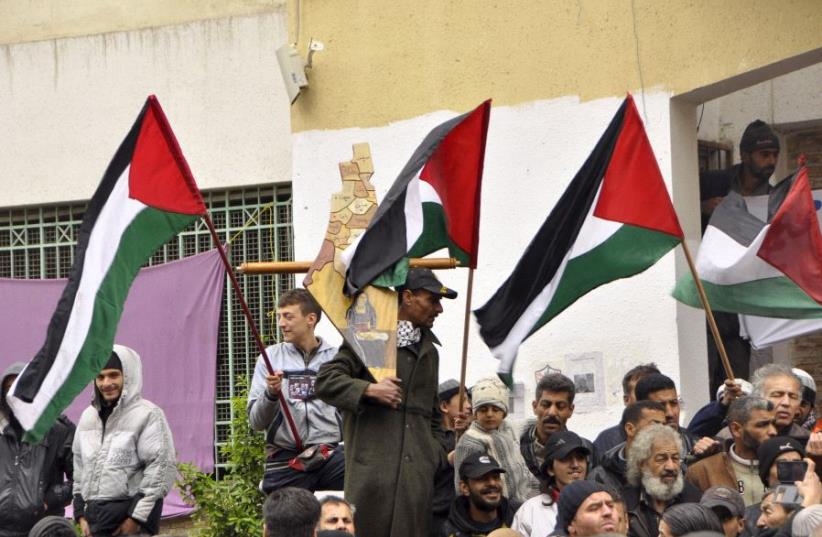 Palestinian residents of the Yarmouk refugee camp in the Damascus district of Syria wave their national flags as they take part in a protest expressing their will to stay inside the camp.
(photo credit: REUTERS)
Advertisement
Taking care of injured Syrians is one thing, National Infrastructure, Energy and Water Minister Yuval Steinetz told Israel Radio on Monday. "But to take in refugees is another issue, which could lead to (Palestinian Authority President Mahmoud Abbas) demanding entry of Palestinian refugees in Syria into the West Bank."Steinetz's comments came days after the government of Syrian President Bashar Assad was suspected of ordering an alleged chemical attack in northern Syria that killed nearly 100 people. The attack in Idlib prompted the first US strike on a regime target since the outset of the Middle Eastern country's more than six-year civil war.In the wake of the chemical attack, Israel has discussed the possibility of admitting to the country for medical treatment some Syrians, particularly children, who were wounded in the strike.  The prospect of an Israeli plan to grant asylum to some 100 children orphaned in the Syrian civil war has also made headlines this years. The Arab sector would apparently be expected to absorb the refugees.
IDF soldiers in the Golan Heights transfer injured Syrians from Syria into Israel for medical treatment on April 6, 2017 (IDF SPOKESPERSON"S UNIT)
In January, Interior Minister Arye Deri approved the humanitarian plan – put together by his ministry’s Population and Immigration Authority and the Jewish Agency – but according to a source familiar with the dossier, the matter has gotten stuck at the Prime Minister’s Office.Since 2015, at least 100,000 Palestinians have fled Syria to Europe and are living in harsh conditions, Ziad al-Aloul, head of the Palestinian Forum in Europe, has said. He also mentioned that, as of 2015, some 500,000 Palestinians have fled their homes in Palestinian refugee camps in Syria. Speaking to the radio station Monday, Steinetz also commented on the recent American airstrikes against Assad in Syria, "I am not a commentator on Trump and his Syria policy," he said, "but what I can say is that the strike sent a clear message to all the regional players and Bashar Assad that a dictator who fools around with chemical weapons, who uses unconventional weapons against citizens will pay a heavy price. This is a message not only for Syria but also for Iran, North Korea and others."He continued, "Israel calls on the US and Russia to complete the depletion of Syria's chemical weapons."Turning to Egypt, he stated that the events in the regional powerhouse had far-reaching impact and therefore everything should be done to help stabilize it."We, like all civilized players in the free world, are very very interested that the situation in Egypt will stabilize, which is why the entire free world must enlist in the effort to help Egypt," he said. "Here we are seeing a big change in US policy, both in tone and in policy, to help Al Sisi stabilize Egypt, economically and regarding security.""A de-stabilized Egypt," he remarked, "is a danger not only to Israel but to the whole Middle East and Europe."As Egypt has faced an increased threat by Islamist militants, the Israeli minister echoed recent warnings for Israelis to avoid travel to the volatile Sinai Peninsula "in the near future, at least."  His advice came as the government on Monday decided to close its side of the Taba Border Crossing between Eilat and Egypt in light of concerns of attacks by Islamic State-linked terrorists against tourists in the Sinai region.Following security assessments, as of Monday, Israel will not allow its citizens to enter Egypt through the crossing, however Israeli citizens will be permitted to return to the country via the Taba crossing. The government therefore urged all Israelis currently in the Sinai Peninsula to immediately leave the area and return to Israel.The Sinai region has been a popular vacation spot for Israelis during the Jewish holiday of Passover, which begins Monday at sundown.Tamara Zieve contributed to this report.