Movable feast marks his ascension to heaven from the Mount of Olives. 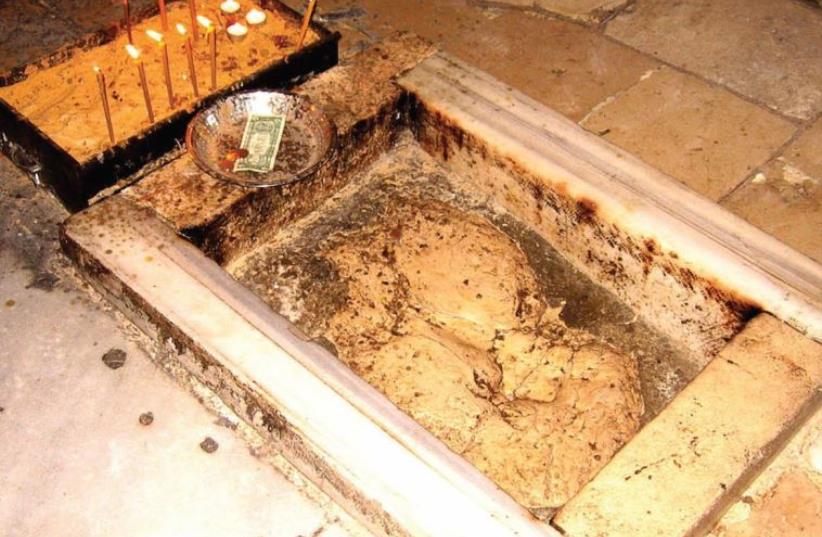 The right footprint of Jesus
(photo credit: Wikimedia Commons)
Advertisement
Hundreds of Catholic pilgrims gathered at the Chapel of the Ascension on the Mount of Olives last week in celebration of Jesus’s rising to Heaven. Since 1187, the shrine has been a mosque, and the Feast of the Ascension is the only time non-Muslim visitors may enter the joint Christian-Muslim holy site without paying a NIS 5 admission fee. (Eastern Orthodox celebrate the event on June 8 this year.) The feast is traditionally celebrated on a Thursday 40 days after the Christian messiah’s resurrection on Easter Sunday (Acts 1:3-4). Since that celebration moves from year to year, the Feast of the Ascension is perforce a movable feast. In honor of the feast, decorative tents are stretched out from hooks in the walls around the courtyard.The early Christians of the Holy Land, prior to the conversion of Emperor Constantine in 312 CE, honored Jesus’s ascension in a cave lower down on the Mount of Olives. By 384, the site of worship was moved to its present location, uphill from the cave. The first church on that site was built around the year 390 and its construction was financed by a wealthy Roman aristocrat named Poimenia who accepted the Gospel.That Byzantine-era church was destroyed in 614 by the armies of Shah Khosrau II during the Persian invasion of the Holy Land, and rebuilt in the late seventh century. The reconstructed church was also eventually destroyed, and rebuilt again by the Crusaders in the 12th century. This structure was destroyed by the armies of Saladin, leaving only a partially intact outer 12x12-meter octagonal wall surrounding an inner shrine, also octagonal, called a martyrium.The remains of that open-to-the-sky structure still stand today, though the Arabs built a dome atop the open eight-sided building, filled in the arcades, and added a mihrab indicating the direction of Mecca. The church/mosque enshrines a stone believed to be imprinted with Jesus’ right foot. The section bearing the left footprint was moved to al-Aksa Mosque on the Temple Mount/Haram ash-Sharif in the Middle Ages, since Islam also acknowledges the sanctity of Jesus’s ascension.The faithful believe that the impression was made as Jesus ascended into Heaven and is venerated as the last point he touched on Earth.Judging from the hollow in the rock, Jesus had large feet.The grounds of the chapel of the ascension also contain a burial crypt near the octagonal shrine that is revered by the three Abrahamic monotheistic religions, although opinion differs on the occupant. Jews believe the tomb contains the seventh-century BCE prophetess Hulda; Christians believe it houses the remains of the fifth-century saint Pelagia of Antioch; while Muslims maintain that the eighth-century Sufi mystic Rabi’a al-Adawiya is buried there.Nearby at the crest of the Mount of Olives in the village of E-Tur, today a suburb of Jerusalem, is the landmark Russian Orthodox Church of the Ascension, with its 64-meter-high bell tower. Built in 1870 by Igumen Parthenius, the site developed into a monastic community of nuns. By 1907 the sisterhood numbered 100.Two years later, Father Parthenius was found stabbed to death in his cell there. The crime was never solved.
sign up to our newsletter