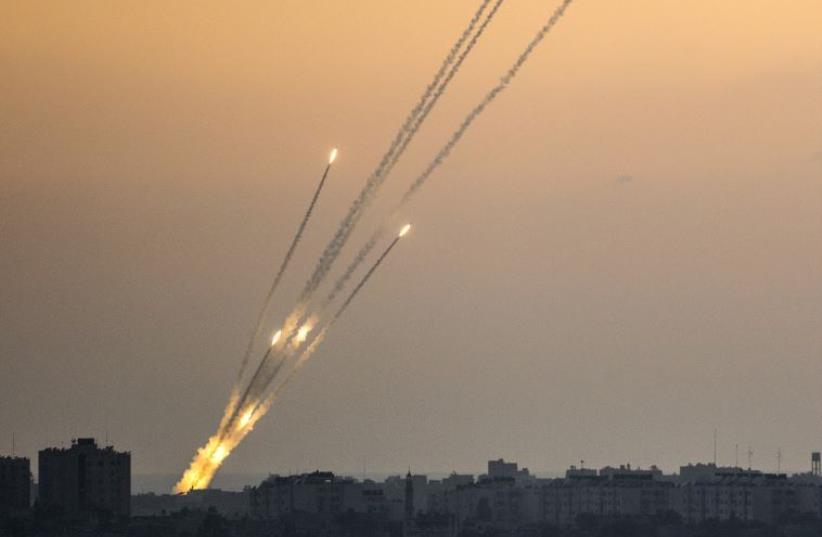 Rockets fired from the Gaza Strip into Israel, July 13, 2014
(photo credit: JACK GUEZ / AFP)
Advertisement
Attacks emanating from the West Bank remained heated, while rocket fire from Gaza was the quietest in over a decade, according to the Meir Amit Intelligence and Terrorism Center’s report for 2016.The current “knife intifada” slowed down around April 2016, but subsequently strengthened, the annual report on terrorism revealed.The worst month of the current wave of Arab violence was October 2015, with 59 “significant terror incidents,” but there was also a high number of such incidents at an average of 23 per month for January to March 2016.In April 2016, there were only five such incidents, and there were other low-activity months, but June, September and December 2016 each jumped back up to 11-12 such incidents.Further, over the entire course of 2016, there were 142 significant violent incidents, compared to 30 in 2014 and 21 in 2013, making 2016 a standout year for terrorism.According to the report, there is no expectation that the violence from the West Bank will end in 2017, and it is even possible that this front and others, including the Gaza Strip, could see a spike in attacks inspired by a “provocative” incident, such as a move of the US Embassy to Jerusalem.Even so, terrorists killed fewer Israelis (17) in 2016 than in 2015, with 30 slain in the last three months of 2015.On the positive side, even as violent incidents continued at a steady rate, general low-grade public disturbances decreased substantially, according to the researchers.Most of the attacks in 2016 were “lone-wolf” stabbings, comprising 61% of significant violent attacks. These attacks were also the least likely to lead to civilian casualties and the most likely to lead to the death of the attackers.Only 23% of significant violent attacks last year were shooting attacks, though these produced a high percentage of casualties, while 8% consisted of Arabs using vehicles to ram or run over people and another 8% were a mix of other kinds of attacks.The high proportion of lone-wolf attacks showed that Hamas and other organized terrorist groups failed to take control of or escalate the wave of violence to a larger scale, according to the report.Briefly, the report also mentions attempts by ISIS and Hezbollah to build up terrorist capabilities in the West Bank, but noted that the efforts have either been blocked by the Shin Bet (Israel Security Agency) or remained small in impact.Meanwhile, Hamas rocket attacks from the Gaza Strip were in 2016 at their lowest point in 11 years, and their number over the last two was less than 1% of the total in those 11 years, said the report.The 2014 Gaza war (Operation Protective Edge) deterred Hamas from further significant adventurism in terms of firing rockets from Gaza, especially given the Islamist organization’s need for time to rebuild its military capabilities and, as a secondary goal, to rebuild the general civilian sector in the Strip, the report said.Moreover, Hamas’s deteriorating relations with Egypt for most of 2016 (which Hamas is finally trying to improve) and the cooling of its relations with supporters such as Iran and Saudi Arabia have also decreased its appetite for another major round of hostilities, said the report.From 2006 to 2016, there have been 10,412 rocket attacks from Gaza, at an average of 947 per year, with the highest number being fired during Israel’s three wars with Gaza: 925 during the 2008-9 war (Operation Cast Lead), 845 during the 2012 war (Operation Pillar of Defense) and 3,852 during the 2014 war.Only 15 rockets were fired in 2016 and only 24 in 2015, for a total of 39 rockets fired in the two years following the 2014 war.In contrast, in the two years following the 2008-9 war, there were 261 rocket attacks from Gaza, and in the two years following the 2012 war (not including the end of 2014 which included the 2014 war) there were 412 rocket attacks.The statistics presented by the report indicate Israel’s deterrence against Hamas firing rockets is even stronger than it was after the 2008-9 and 2012 Gaza wars.Those statistics cover only rockets that struck into Israel, not mortar shells, or misfired rockets that hit in Gaza.