Two shooting attacks occurred on Saturday during which an army guard post near Ramallah and a private vehicle close to Ateret were attacked. 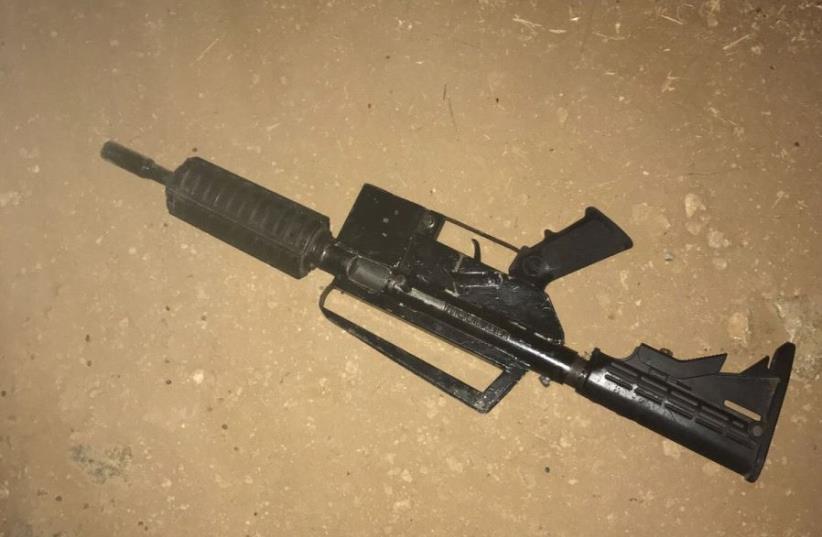 Weapon used to shoot at Israeli Police in Nabi Salih July 16
(photo credit: COURTESY ISRAEL POLICE)
Advertisement
Israeli security forces shot and killed a suspected terrorist during a shootout in the West Bank overnight on Saturday.A suspected terrorist, Aamer Ahmed Halil from Nabi Salih, resisted arrest and drew a home-made weapon at security forces who killed him and arrested another man who was with him. Israeli forces suffered no casualties.  Two shooting attacks occurred on Saturday during which an army guard post near Ramallah and a private vehicle close to Ateret were attacked. A combined IDF and  Border Police Anti-Terrorism Unit and Shin Bet effort led Israeli forces to the suspected shooter.The incident came as terrorists killed two Border Policemen at the Temple Mount compound on Friday morning, after which police imposed a closure on the compound and restrictions on entry to the capital’s Old City.Around 7 am, three young men opened fire next to the Gate of the Tribes (Bab al-Asbat) and wounded three policemen. Border Police officers Haiel Stawi, 30, and Kamil Shanan, 22, later died from their wounds.The three terrorists fled into the compound, reportedly seeking refuge in the Muslim structures there, and were immediately shot by police.