Israelis step up Syrian aid efforts, but plan to absorb orphans is held up

Unclear why effort to bring in 100 refugees has stalled. 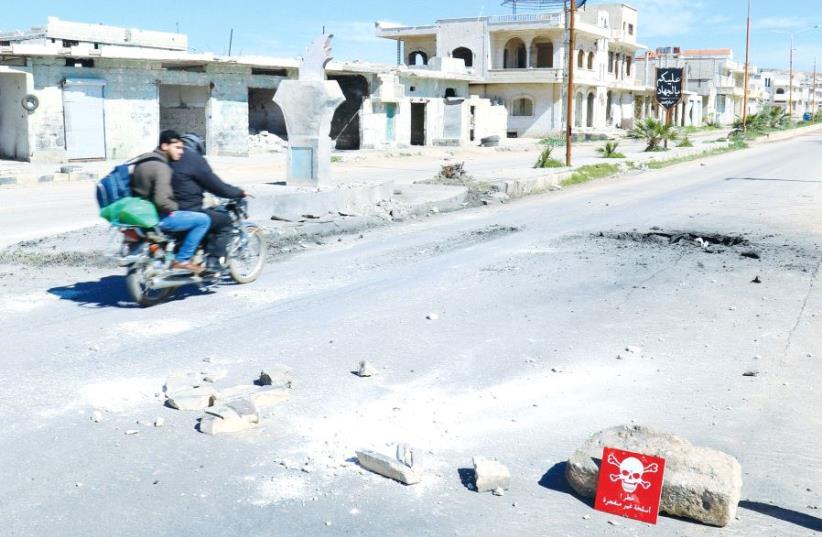 MEN RIDE a motorcycle yesterday past a hazard sign in rebel-held Khan Sheikhoun in Syria’s Idlib province near a site that was hit by an air strike on Tuesday
(photo credit: REUTERS)
Advertisement
The Israel Gives NGO launched an emergency campaign on Wednesday to provide emergency medical supplies to the children of Syria, following a suspected gas attack in Idlib the previous day.“No Jew can stay silent as children are being gassed in the streets of Syria,” the campaign message states. “We cannot sit back any longer and watch the horrors play out. We need to act – and here is a way.”The NGO is partnering with humanitarian organizations such as Israeli Flying Aid to deliver medical supplies to Syrian civilians.
Hundreds protest in Israel at US embassy and Russian embassy in solidarity with Syria (credit: REUTERS)
In the first hours of the campaign almost half of the NIS 200,000 goal had already been met.Moti Kahana, founder of NGO Amaliah, told The Jerusalem Post that he was working on delivering Atropine – an antidote to certain types of nerve gas – to doctors in Idlib. Though he acknowledges the medical aid won’t reach the doctors in time to help the victims of Tuesday’s attack, he does not believe this will be the last time it is needed.“I am sure [Syrian President Bashar] Assad will not stop as long as the USA and Russia will not stop him,” he said.Kahana decried the delay of an Israeli plan to grant asylum to some 100 children orphaned in the Syrian civil war. The Arab sector would apparently be expected to absorb the refugees.In January, Interior Minister Arye Deri approved the humanitarian plan – put together by his ministry’s Population and Immigration Authority and the Jewish Agency – but according to a source familiar with the dossier, the matter has gotten stuck at the Prime Minister’s Office.Interior Ministry spokeswoman Sabine Hadad said the plan had been stalled due its complex nature; she did not specify who was responsible for the hold up. She said Deri had approved negotiations between Israeli officials and the relevant international bodies, and that the ministry was waiting for the green light to proceed, but that she didn’t see this happening in the near future.The aforementioned source said that Israel officials had canceled a meeting with the Office of UN High Commissioner for Refugees, which is yet to be rescheduled.The source also noted that the prime minister had initially encouraged the initiative, but speculated that he may have been deterred after Deri leaked the story to the media, sparking heated debate among MKs and in the media on the topic.Some opposition to the initiative stems from Syria’s status as an enemy state and consequent security concerns, while others said the government should grant refugee status to African asylum-seekers already living in Israel, before bringing more refugees in. The children would be brought to Israel with temporary residency status, but according to UN requirements, Israel would eventually have to grant them some sort of permanent status.There is also division over the subject among Arab Israelis, some of whom take opposing positions on the civil war, the source noted, though he stressed that the true reason for the hold-up was unclear.The Prime Minister’s Office itself had no direct comment on the claims that Netanyahu was stalling the proposal, instead stressing that “on any given day, dozens of Syrians are treated in Israeli hospitals.”According to the PMO, Netanyahu is willing to increase that number and recently secured funding to do that. “The problem is getting wounded Syrians from the battle zone to Israel,” one senior official said.The first Israeli politician who called for absorbing Syrian refugees was opposition leader Isaac Herzog, in September 2015.“Jews cannot be indifferent when hundreds of thousands of refugees are seeking shelter,” he said them.Herzog’s associates said on Wednesday that his approach had not changed, as long as security considerations are satisfied.Herb Keinon and Gil Hoffman contributed to this report.