Whether credible or not, the plans never came into effect as Israel emerged victorious from the conflict. 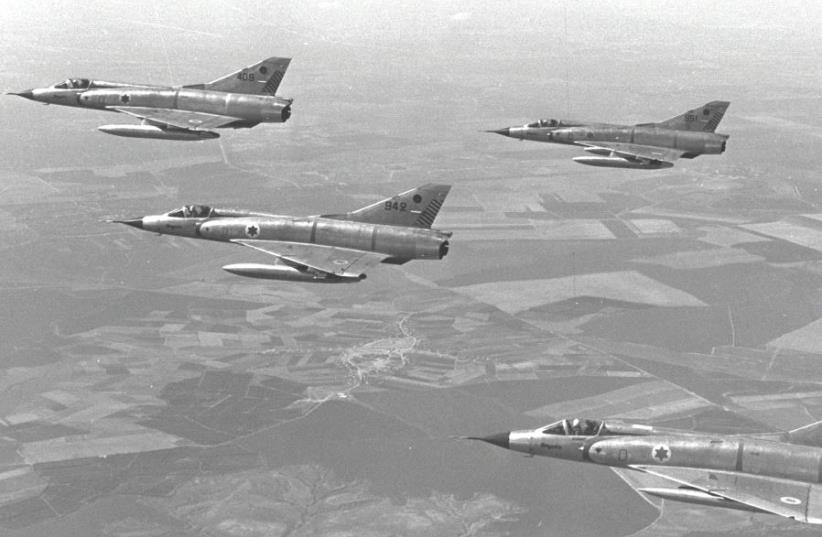 ISRAEL AIR FORCE Mirage fighter jets train over Israel in 1967 before the Six Day War.
(photo credit: GPO)
Advertisement
One of Israel's greatest wartime secrets is due to be revealed on Monday - a so-called last gasp nuclear "doomsday operation" to avoid defeat in the imminent 1967 Six Day War. However, some are treating the reported revelation with skepticism. The contingency plan, nicknamed "Samson" (or "Shimshon" in Hebrew), would have allegedly involved the detonation of a nuclear device in a desolate part of the Sinai Peninsula in an incredible demonstration of Israel's military might. The operation was to be potentially used as a last-resort scenario to ensure Israel's existence in the case of a looming defeat. The secret plans are detailed in a never-before-seen 1999 testimony of one of the senior organizers of the operation, Itzhak Yaakov - a former IDF brigadier general. Interviewed by historian Avner Cohen, the account of the Israeli plan is to be published by the Nuclear Proliferation International History Project (NPIHP) of the Wilson Center. "You've got an enemy, and he says he's going to throw you to the sea. You believe him," explains Yaakov in an excerpt of the testimony obtained by the New York Times. "How can you stop him? You scare him. If you've got something you can scare him with, you scare him."Two helicopters were due to deliver the nuclear device and a command post would have been created in a nearby mountainous area. Depending on weather conditions, the explosion might have been seen as far as Cairo.Ahead of the publication of Yaakov's testimony, deputy minister and historian Michael Oren stated that he is treating the upcoming publication with considerable skepticism. "I also interviewed Itzhak Yaakov, and I was not convinced that his story holds water," stated Oren, adding that serious academic research does not rely on one lone source. "If there was something, we would find additional testimonies."Historian Cohen decided that this was the apt time, 50 years after the Six Day War, to publish the previously unheard account of the operation.Whether credible or not, the plans never came into effect as Israel emerged victorious from the conflict.According to the New York Times, Yaakov was arrested in 2001 on charges of "high espionage" a year after telling his story to Cohen and put on a secret trial. He  was found guilty of handing over secret information and received a two-year suspended sentence. Yaakov died in 2013 at age 87.