PMO to Jordan on Temple Mount: Jerusalem is acting responsibly, and Amman knows that

PMO: There is absolutely no basis to Jordanian claims that Israel is violating Temple Mount status quo. 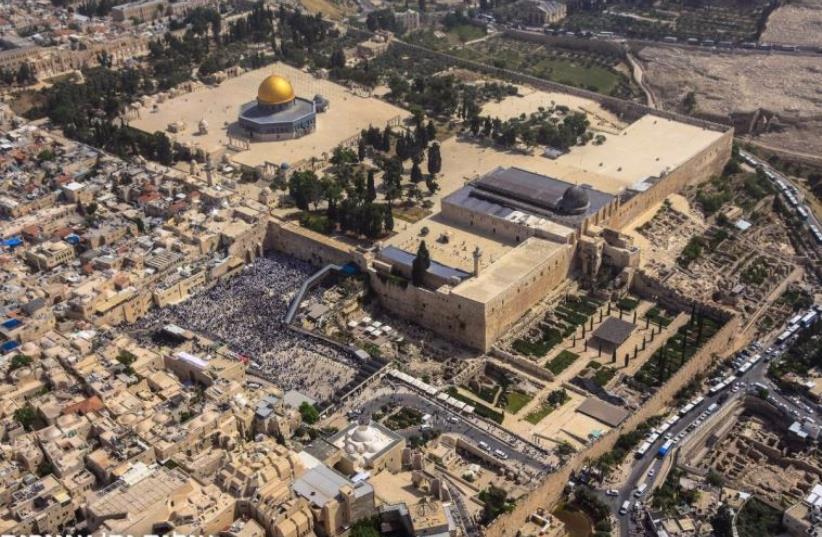 Aerial view of Temple Mount
(photo credit: ISRAEL POLICE)
Advertisement
One day after 13 Jews were removed from Jerusalem’s Temple Mount for illegally praying at the contested holy site, the Jordanian government on Monday warned Israel of “serious consequences” if the area’s delicate status quo is breached.Sunday morning’s impasse was further exacerbated when a group of Muslims was also removed from the compound by police for chanting “Allahu Akbar” (“God is great”) at the nearly 1,000 Jewish and Christian visitors who ascended it for the holiday.In a sharply worded statement issued Monday, Jordanian Media Affairs Minister Muhammad al-Momani accused “Israeli settlers and police” of flagrantly violating international laws and conventions by “storming al-Aksa Mosque,” which he said could lead to “serious consequences.”The ongoing and wholly unsubstantiated allegations that the Israeli government surreptitiously intends to seize al-Aksa – Islam’s third holiest site – has led to the recent wave of deadly terrorism which has largely fueled what many are deeming a third intifada.Indeed, Hamas, the Palestinian Authority and numerous other Palestinian organizations have aggressively taken to social media and other news outlets since October to claim that the mosque is “in danger” and must be defended.Prime Minister Benjamin Netanyahu has repeatedly and categorically denied the inflammatory accusations, assuring the Muslim world that Israel has no intention of altering the status quo at the contested site, which allows unlimited Muslim prayer and limited Jewish visitation.On Monday, the Prime Minister’s Office issued a brief statement emphasizing that “there is absolutely no basis to these claims,” adding that “Israel is behaving responsibly, and Jordan knows that.”Still, former east Jerusalem portfolio head and Meretz City Councilman, Dr. Meir Margalit, warned that Jordan’s concerns should be taken seriously, or risk further escalation and violence.“We have two choices now,” said Margalit by phone on Monday afternoon.“One is to give the Jordanian government some kind of control of what is going on there, or the other choice is to let Hamas take control of the Temple Mount.”“So, let the Israeli government decide what they prefer: either the Islamist Movement or the Jordanian government,” he continued. “If the Israeli government has a little bit of sense, they will invite King Abdullah to take some sort of control of the Temple Mount.”Asked if all Jews should be forbidden from visiting Judaism’s holiest site to avoid more confrontations with Arabs, Margalit responded that strict limits must only be placed on Jewish radicals.“Right-wingers who enter for provocation should be forbidden,” he said. “I have no problem with Jews or Israelis going there, I have a problem with provocateurs.”Meanwhile, Right-wing Temple Mount activist Yehudah Glick, who survived an assassination attempt in 2014 for his Jewish visitation advocacy, said Israel maintains “sovereignty” over the contested site and must not be intimidated by Jordan’s threats.“The Temple Mount is the holiest place in the world for millions of Jews and non- Jews,” he said on Monday. “And according to Israeli law, the Temple Mount is under Israeli sovereignty, and Israel is the only one who can decide who has access and who does not.”Noting the 13 Jews who were removed from the site on Sunday morning for “disturbing the public order” by openly praying, Glick emphasized that the government has nonetheless taken great pains to maintain the site’s status quo.“Israel is very strict that all Jews ascend without conducting any religious activity,” he said. “But they do have access, and Jordan is aware of that, and therefore I refer to all these official statements as an effort to impress the Palestinian world, and nothing beyond that.”Glick added that Monday’s warning has become somewhat customary.“We’ve heard pronouncements like this from Jordan from time to time,” he said.“It’s nothing new.”Moreover, he said, his hope is that the Temple Mount “remains a house of prayer for all nations,” and a “world center for peace. That’s our goal, and one day we will achieve it.”However, Margalit said he remains unmoved by such lofty sentiments from a man he has described as a “pyromaniac.”“Guys like Yehudah Glick will bring us Hamas,” he warned.