US Secretary of State John Kerry is due to make remarks regarding Middle East peace later today. 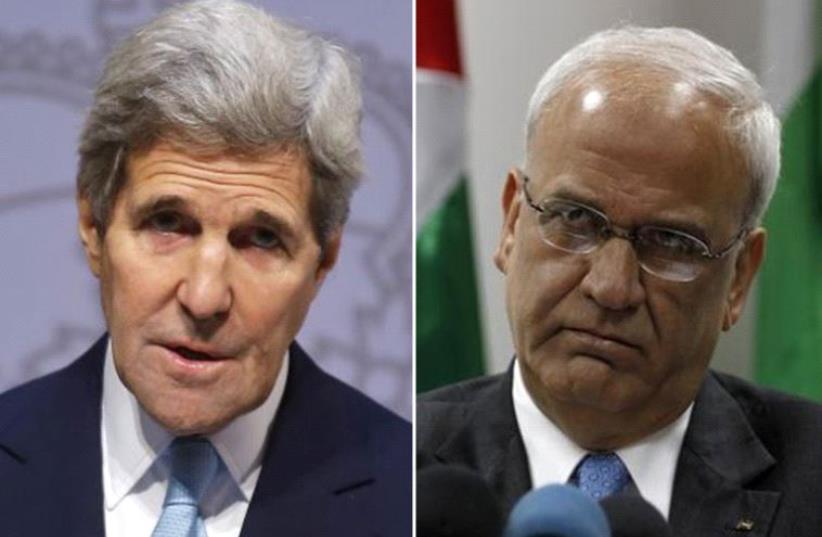 Kerry and Erekat
(photo credit: REUTERS)
Advertisement
Prior to the UN Security Council vote on anti-Israeli settlement resolution 2334, US Secretary of State John Kerry met with a Palestinian delegation in early December in Washington to discuss the draft, agreeing to cooperate, according to transcripts released by Egyptian daily Al-Youm Al-Saba'a.According to the report, Kerry along with US National Security Adviser Susan Rice, met with Secretary General of the PLO Executive Committee Saeb Erkat and Majed Faraj, head of the Palestinian Authority's General Intelligence Service. The reported transcripts reflect statements by numerous Israeli officials claiming that the resolution was orchestrated by the Obama administration. The source of the leaked transcripts was not named. The United States on Friday broke with a longstanding approach of diplomatically shielding Israel and abstained on the United Nations Security Council resolution that passed with 14 countries in favor and none against."We have ironclad information that emanates from sources in the Arab world and that shows the Obama administration helped craft this resolution and pushed hard for its eventual passage,” said David Keyes, a spokesman for Prime Minister Benjamin Netanyahu.The US State Department has denied claims that the US was involved in perpetuating the resolution. Meanwhile, Erekat has denied the claims written in the documents.Erekat said that some people who have close relationships with "War Minister" Avigdor Liberman and the Austrian, Zionist financier Martin Schlaff fabricated the document to back up remarks by the Israeli government that indicate that the UNSC resolution was a conspiracy between the Obama administration and the Palestinian side.Kerry was set to make remarks regarding the Middle East peace process later on Wednesday. He was expected to discuss the next steps needed to resolve the Israeli-Palestinian conflict, State Department spokesman Mark Toner said on Tuesday.The speech, less than a month before US President Barack Obama leaves office, is expected to be the administration's last word on the decades-old dispute that Kerry had hoped to resolve during his four years as America's top diplomat.It could also be seen in Israel as another parting shot at Netanyahu, who has had an especially acrimonious relationship with Obama since they both took office in 2009.Reuters contributed to this report.