Activists break their Fast of Av in Sussiya, praying Liberman will save it today

At issue is the unauthorized placement of homes on land zoned for agriculture use. But those talks were halted, pending an opinion from Liberman. 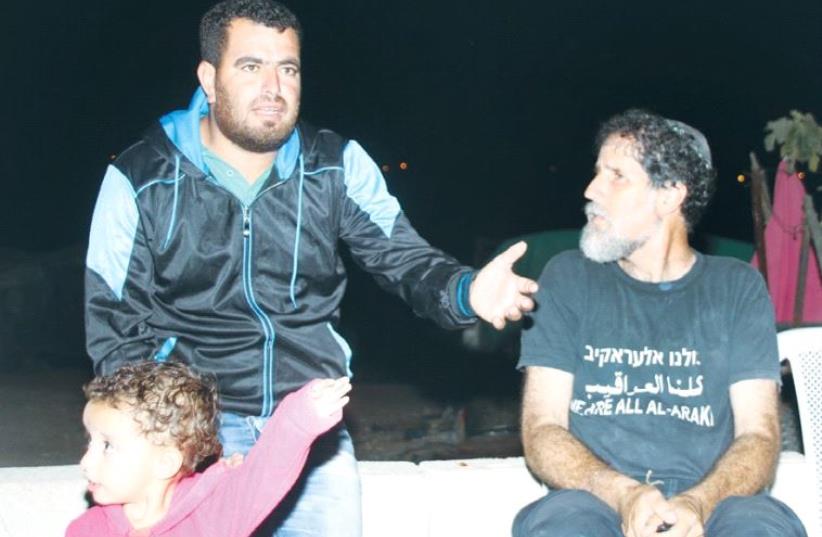 VILLAGER NASSER NAWAJAA makes a point to human rights activist Rabbi Arik Ascherman in Sussiya yesterday.
(photo credit: TOVAH LAZAROFF)
Advertisement
A small group of Israeli activists broke their Tisha Be’av fast with tea and dates in the Palestinian village of Sussiya, whose demolition is pending.They sat on white plastic chairs on the concrete patio of a large brown tent that houses one of the 45 families in the village.The branches of a small pomegranate tree swayed above them in the chilly night wind. Goats and sheep graze in back of the structures near where the bee hives are located, from which the villagers produce honey.“At this moment, as we pass from mourning to hope, let us utter a prayer to the decision makers,” said the group’s leader, Rabbi Arik Ascherman, speaking to the villagers and the activists.“No one needs to promise them the sky,” said Ascherman, formerly of Rabbis for Human Rights who now heads a new non-governmental organization, Khakel. “They just need a piece of land, where they can put their heads.”From where they sat in the South Hebron Hills region of the West Bank, they could see the lights of the nearby Israeli settlement of the same name.On Monday, Defense Minister Avigdor Liberman is scheduled to issue his opinion on the village’s fate to the High Court of Justice, which is adjudicating the question of a legalized location for the village of some 100 tent structures and more than 300 people.Ascherman said he could not help but note the timing of Tisha Be’av, when Jews mark the destruction of the Temple due to senseless hate.He and the activists sang a traditional Tisha Be’av prayer, but added a special verse for Sussiya, “for the village in danger, because of the appetite of the state.”Nasser Nawajaa described how the village has been in a decade-long struggle with the state for the right to build homes on the land around Sussiya.One of the more memorable demolitions in the village occurred in 2001, after Palestinian terrorists killed an Israeli resident of the Sussiya settlement, Yair Har Sinai, 51, as he tended his sheep.Nawajaa said he was one of the dozens of people briefly detained and released in the aftermath of that killing. He recalled how he returned home, after a night in jail, only to discover that the IDF had destroyed his home.“I had hatred in my heart,” Nawajaa said. “I did not know anything.”His attitude changed after he met the many Israelis activists who came to help the village.The persistent and prolonged campaign to save Sussiya has garnered international attention. Both the United States and the European Union have warned Israel against razing the structures.In conjunction with the court petition over a master plan for Sussiya, the Civil Administration for Judea and Samaria held a number of meetings with the villagers in hopes of finding a solution.At issue is the unauthorized placement of homes on land zoned for agriculture use. But those talks were halted, pending an opinion from Liberman.Nawajaa said he fears Liberman’s response, because he recalled how the Yisrael Beytenu leader had visited the nearby settlement the previous year and spoke of the need to demolish their village.The South Hebron Hills Regional Council and the nongovernmental group Regavim have also spoken in favor of tearing it down. They have rejected Palestinian family claims that they have a long history with the land, and instead insist that the families are from the nearby town of Yatta.In the past they have claimed that the placement of homes in Sussiya is part of a long-term plan by the Palestinian Authority to increase it’s holding in Area C of the West Bank, and therefore must be stopped.