Liberman: If Palestinians pay up - they'll receive electricity from Israel 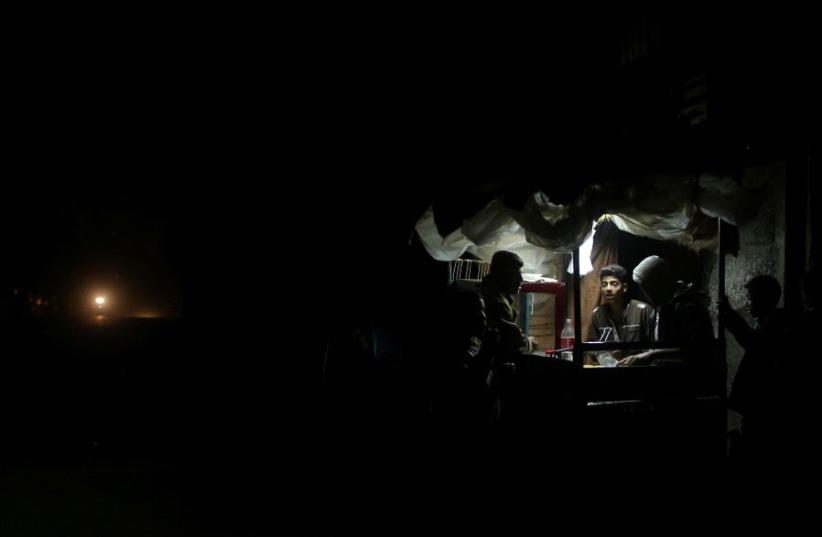 A Palestinian man sells falafel in a makeshift shop lit with a lamp powered by a battery during a power cut in Beit Lahiya in the northern Gaza Strip January 11, 2017. Picture taken January 11, 2017.
(photo credit: REUTERS/MOHAMMED SALEM)
Advertisement
Defense Minister Avigdor Liberman addressed the ongoing electricity dispute in the Gaza Strip on Thursday saying, “If [the Palestinians] will pay, they will receive electricity.”In an interview with the Arabic-language website Al-Munsak, which is operated by the IDF’s Coordinator of Government Activities in the Territories unit, Liberman emphasized that Israel is not a party to the dispute – rather, that the dispute is between Hamas leadership and the Palestinian Authority.“[Israel] is not part of this issue. If they will pay, they will receive electricity. If they won’t pay, they won’t,” said Liberman. “We are certainly ready to supply.“But it is important to underline that it is Hamas that collects NIS 100 million in taxes every month from Gaza Strip residents. Instead of this money going into the education system, into improving the health or water systems, it all goes into terrorism infrastructure, into tunnels and rockets.”The ongoing electricity dispute comes after the PA announced its intention to pay only 60% of its monthly electricity bill to Israel.
Gaza power crisis
On Sunday, Israel’s Security Cabinet agreed to the PA's request to cut the electricity it sends to Gaza by 40%, as part of an effort by the PA to pressure Hamas to relinquish control of the territory.The two million residents of the Strip now rely on a mere two to three hours of power a day.Ten years after Hamas seized control of the coastal enclave, Liberman called on its inhabitants to demand change from their leaders.“Demand from Hamas to invest money in the education system and in the health system,” said Liberman. “Israel is ready to build industrial areas, places of work... [and] power plants [in Gaza], but the basic condition is demilitarization.”Acknowledging the “unprecedented” situation in Gaza, Liberman concluded, “If there is demilitarization, there will be reconstruction.”On Tuesday, Prime Minister Benjamin Netanyahu addressed rising fears of a possible military escalation resulting from the electricity dispute. “We have no interest in an escalation [of violence], and any other interpretation is erroneous,” he said.