Netanyahu agrees to meet with settlers, might increase construction

Netanyahu told politicians on Tuesday, “I have the privilege after scores of years to be the prime minister who builds a new settlement in Judea and Samaria.” 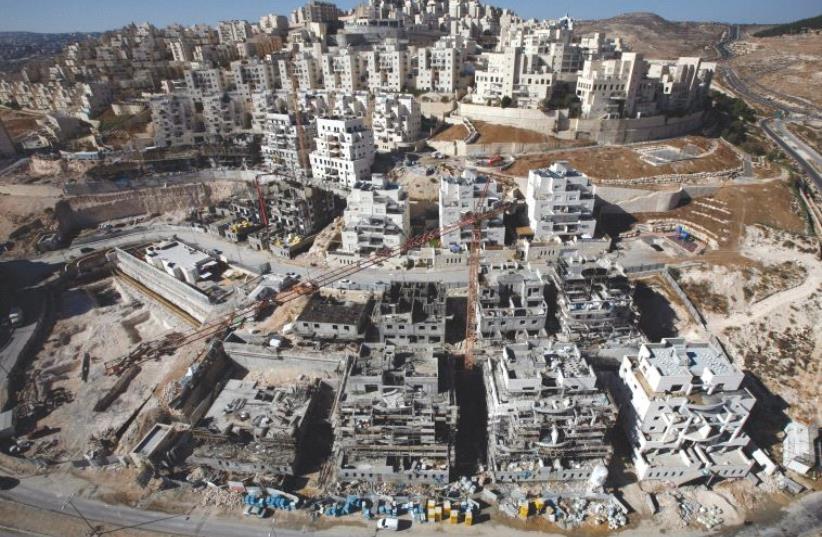 HOUSES UNDER construction in the Har Homa neighborhood of Jerusalem in 2010
(photo credit: REUTERS)
Advertisement
Prime Minister Benjamin Netanyahu, appearing to bow to right-wing pressure, may consider additional settler homes beyond the 2,480 that are already on the table. He has agreed to meet with settler leaders on Wednesday to discuss increased housing for West Bank settlements.The Higher Planning Council for Judea and Samaria on Tuesday proposed plans for 102 homes in the new Amihai settlement near the existing Shiloh settlement. The cabinet approved the settlement in March to relocate the 40 families who were evacuated from the Amona outpost in February. It was the first such approval in more than 20 years.Netanyahu told politicians on Tuesday, “I have the privilege after scores of years to be the prime minister who builds a new settlement in Judea and Samaria.”Speaking at an event to mark the 50th anniversary of the Six Day War, Netanyahu dismissed charges that he has not done enough for the communities in Judea and Samaria.“I have done what is needed to preserve these communities. I promise you, no one has done more. We convened the cabinet and unanimously decided that we are building in all areas of Judea and Samaria.”Netanyahu said it was possible to both work toward peace with the Palestinians and to preserve the settlement enterprise.The Higher Planning Council for Judea and Samaria approved or advanced plans for at least 1,500 homes. It is expected to meet again on Wednesday on the rest of the homes, according to Peace Now. This includes the approval of 839 new homes in the Ariel settlement and 255 in Kerem Reim, a new neighborhood of Talmon.Ma’aleh Adumim Mayor Benny Kashriel said that plans for 459 new homes were advanced in his city.But settler leaders have complained that the list was not nearly extensive enough and left many of the 130 settlements in Judea and Samaria without new housing.