Israeli stabbed to death in West Bank attack, assailant on the loose

Hamas says attack is proof the 'knife Intifada' has not died down.

By TOVAH LAZAROFF
FEBRUARY 5, 2018 14:43
CCTV Footage of the stabbing attack outside Ariel
Advertisement
Rabbi Itamar Ben-Gal, 29, father of four, was on his way to his nephew’s brit mila at around 2:30 Monday afternoon, standing on the sidewalk outside the Ariel settlement a short distance away from a bus stop, a bag at his feet and a jacket over his white, buttoned-down shirt.He didn’t seem to notice 19-year-old Abed al-Karim Adel Asi, an Israeli-Arab, who got out of a yellow mini-van on the other side of the heavily trafficked road with a knapsack slung over his shoulder.Nor did Ben-Gal see Asi when he stood on the curb, pulled out a knife before crossing the highway, ran the last few steps toward Gal, and then suddenly, stabbed him in the chest.Although mortally wounded, Ben-Gal ran across the street, as did the terrorist. Ben-Gal banged on the closed door of a bus that stood by the curb, before fainting.An IDF officer driving by saw the stabbing attack and hit the assailant with his car.The assailant was still able to flee the scene with the help of a vehicle that had been waiting for him.But as the assailant fled he dropped the knife and his bag with his identity card inside, identifying him as living in the Tel Aviv-Jaffa area. His mother is an Israeli-Arab from Haifa and his father is Palestinian from Nablus, which is close to Ariel.
Scene of West Bank stabbing attack, February 5, 2018. (Credit Samaria regional council)
The IDF said it was searching for the terrorist, but as of press time had still not captured the suspect.A security camera video that captured the actual moment of the attack was circulated on social media and by news agencies.“The heart breaks,” Defense Minister Avigdor Liberman tweeted. “It’s only a matter of time before security forces will close accounts with the murderer.” According to the Palestinian news agency WAFA, the IDF detained a Palestinian intelligence officer in the city of Salfit and set up a checkpoint at the northern entrance to the city after the attack. It also set up checkpoints to the towns of Kafr Deek, Deir Its and Kafl Haris.“We will bring them [the terrorists] to justice,” Prime Minister Benjamin Netanyahu said at the start of the Likud faction meeting.He told the faction of Ben- Gal’s death – before family members had yet to learn that their loved one had been declared dead, shortly after his arrival in a Magen David Adom ambulance at Beilinson Hospital at the Rabin Medical Center in Petah Tikvah. 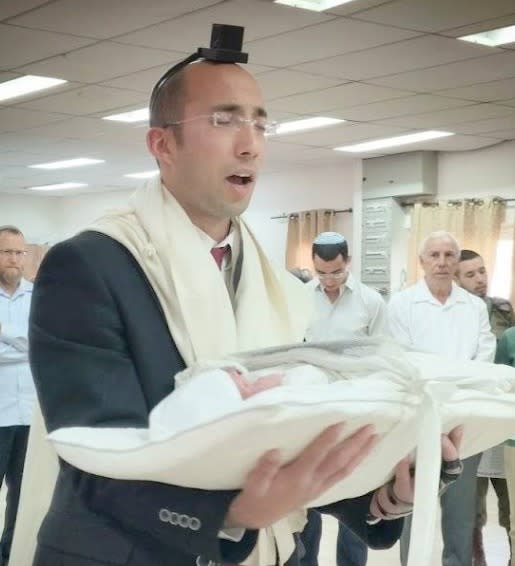 The victim Itamar Ben Gal at his son’s bris a year and a half ago (COURTESY SAMARIA REGIONAL COUNCIL)The brit, for the son of Ben- Gal’s sister-in-law, was held as planned at Yeshivat Har Bracha in the Har Bracha settlement, where Ben-Gal lived with his family and taught at the yeshiva.Ariel Mayor Eli Shaviro called on Netanyahu, government ministers and Knesset parliamentarians to respond to the attack by annexing settlements in Judea and Samaria.“You have the responsibility to prevent the next terror attack,” Shaviro said. “Apply sovereignty.”Ben-Gal’s death marks the second time this month that an Israeli has been killed in a terror attack in the Samaria region.On January 9, Rabbi Raziel Shevach, a father of six, was shot dead by Palestinians as he drove near his home in the Havat Gilad outpost.Two of Shevach’s brothers are graduates of the Har Bracha yeshiva.Shevach and Ben-Gal knew each other. A photograph of the two of them together with three other men was circulated on WhatsApp late Monday afternoon.Ben-Gal will be buried in Har Bracha on Tuesday morning.Samaria Regional Council head Yossi Dagan said that two murders in one month was unacceptable.“I cannot look anymore into the eyes of bereaved families,” Dagan said. “It is not enough to chase terrorists. The terror infrastructure must be dealt with.” He called on the IDF to restore the checkpoints that had been taken down as a humanitarian gesture to the Palestinians in the West Bank.Hamas Politburo member Husam Badran, who is the former head of Hamas in the northern West Bank, said the attack was part of the “new heroism” of the “free people of the West Bank,” who were “targeting settlers who have wreaked havoc in the land.”To the Israelis, he said: “Neither your forces nor your army will protect you, and security cooperation will not be of use to you. Oh you usurping occupiers, you are paying with your blood the price of Netanyahu’s stupidity and Trump’s arrogance,” Badran said.Israel’s Ambassador to the United Nations Danny Danon called on the Security Council to demand that the Palestinian Authority stop payments to terrorist and their families rather than asking PA President Mahmoud Abbas to speak at its February 20 meeting.“The Palestinian leadership must be held accountable for today’s horrific murder in Israel,” Danon said. “This terror attack is the direct result of incitement and payments to terrorists by the Palestinian Authority. Instead of inviting Mahmoud Abbas to address the Security Council to disseminate lies and hate, the council should unequivocally condemn this attack and demand that he stop paying stipends to terrorists.”President Reuven Rivlin tweeted that he was “deeply saddened” by the attack.“We all send comfort and strength to his widow, his four young children, his family and his students, who will never forget him,” Rivlin said.Anna Ahronheim and Adam Rasgon contributed to this report.