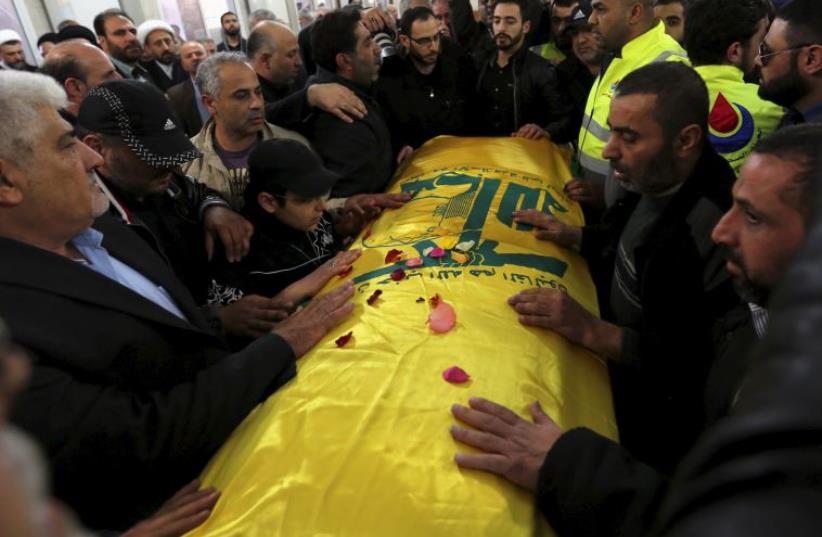 Funeral of Samir Kuntar
(photo credit: REUTERS)
Advertisement
A lawmaker from the opposition publicly stated on Saturday what many believe to be true, although it has yet to be officially confirmed by the government – Israel was behind the killing of Hezbollah operative Samir Kuntar.During a town hall meeting in Beersheba on Saturday, Zionist Union MK Omer Bar-Lev was asked about the Lebanese Shi’ite group and its leader, Hassan Nasrallah, in the wake of recent threats to attack chemical facilities in Haifa.“I would not recommend to Nasrallah that he leave his bunker,” the lawmaker, a former commander of the elite reconnaissance unit Sayeret Matkal, said. “Why? Because he’s an enemy and he’s a target.He needs to be a target, so on a personal level, I would advise him to look after himself.”When the moderator asked if Nasrallah would be targeted “at the earliest possible opportunity, just like Samir Kuntar,” Bar-Lev tried to dance around the subject.“I certainly do not want to make operational statements of that kind,” he said.But moments later, Bar-Lev was asked if the Kuntar killing could be considered “a tremendous success for Israel.”“Yes, certainly,” the lawmaker replied.Bar Lev released a statement afterward denying that he had confirmed that Israel was behind the assassination of Kuntar. “Any terrorist dying is welcome, and it does not matter if we had a hand in it or not,” he said.Kuntar was killed in December when a number of rockets hit a building in the Damascus district of Jaramana. Government loyalists said the explosions had been an Israeli strike.Kuntar, a Druse, was reviled in Israel for a 1979 attack that killed four people, two of them children. Israel released him in 2008 as part of a swap with Hezbollah for the bodies of missing soldiers. He was welcomed as a hero in Beirut, and later married a Lebanese Shi’ite woman from a family associated with Hezbollah.Gil Hoffman contributed to this report.