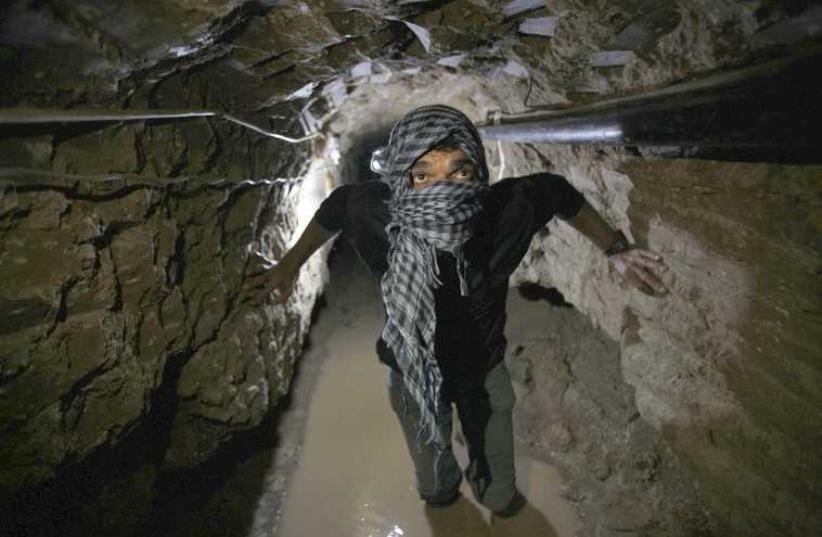 A smuggling tunnel beneath the Egyptian-Gaza border in Rafah [File]
(photo credit: REUTERS)
Advertisement
A Gazan has been indicted for diverting building materials meant for reconstruction in the Strip directly to Hamas’s armed wing, the Shin Bet said on Wednesday.The suspect, named by the Shin Bet (Israel Security Agency) as 36-year-old Tamer Ahmed Muhammad Barim of Bani Suheila, was arrested trying to enter Israel at the Erez crossing on the northern Gaza border on August 31. His arrest remained under a gag order until Wednesday.A Shin Bet spokesman said the agency did not clear the arrest for publication until Wednesday because there were additional “investigative steps” necessary for the case that required it be kept confidential.The case was reported more than a month after Barim was indicted in the Beersheba District Court on security charges including assisting a terrorist organization.The spokesman added that Barim “knew why he was being arrested” and that the investigation was in process for some time before the arrest. The Shin Bet would not reveal how many times Barim made these shipments to the Gaza Strip or if he has any suspected accomplices in Israel.The Shin Bet said that Barim managed to circumvent UN inspectors who supervise imports to the Strip, allowing him to divert hundreds of tons of building materials provided by foreign donors for the rehabilitation of civilian infrastructure damaged during Operation Protective Edge in the summer of 2014.On Wednesday, the Shin Bet said the case – which was investigated in collaboration with the Southern District of the Israel Police – represents “further testimony of how Hamas exploits donor funds meant for the rehabilitation and development of the civilian infrastructure in the Strip for the purposes of terrorism.”