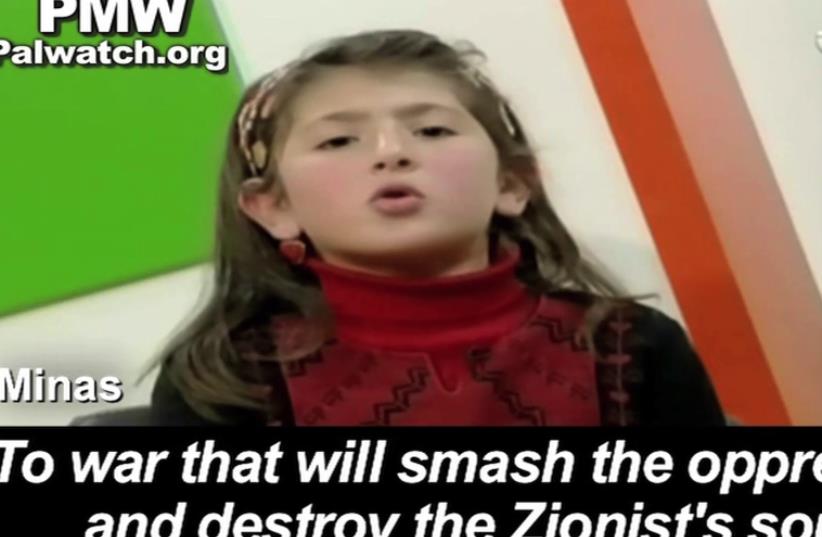 Palestinian Media Watch shows Palestinian girl reciting poem that calls for a "war that will smash the oppressor and destroy the Zionist's soul,"
(photo credit: PALESTINIAN MEDIA WATCH)
Advertisement
Palestinians living in the West Bank have been told that rabbis teach Israeli children that they should “kill everyone who is not Jewish,” stated Wasaf Erekat in a program titled PLO – Conventions and Agreements broadcast on official PA TV on December 16th, Palestinian Media Watch (PMW) claims. Erekat, who made the allegation, was introduced as a military expert.Erekat continued these allegations, according to the report, by stating that “the Israelis train their children to carry weapons. Our children don’t carry a weapon, they train them with weapons and train them based on the principle: ‘Kill everyone who is not Jewish.’”  Erekat accused rabbis of implanting this indoctrination in the children of Israel.This is not the first time that Palestinian viewers have been told that Jews hate them and want to kill them. In the series Fida’i (‘Self-sacrificing fighter), produced by Al Aqsa TV in 2015, a Jewish family is seen at the hospital bedside of a relative who was beaten and injured. As they discuss who the attacker might be, a young boy says: “Definitely an Arab. I hate Arabs. I want to kill them!”A male relative responds: “My dear Noam, I want you to be like this. You should always hate Arabs. All our lives we hate Arabs. We don’t love Arabs.”PMW, which published the claims, is a right-wing non-profit Israeli research institute known for its claims against Palestinian society.