Settlers have called on the IDF to protect the Samaria Regional park after a Palestinian flag was placed on the site. 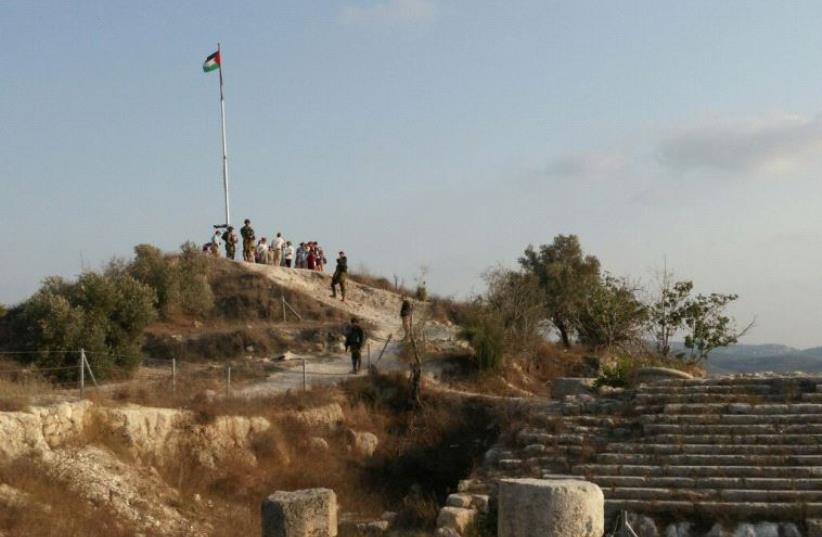 Palestinian flag at the Samaria Regional Park
(photo credit: RAFI AVITAL)
Advertisement
For the third time in the last month, the Palestinian flag was placed in Samaria National Park overnight, settlers said on Sunday.They called on the IDF to take steps to protect the archeological site.It is located on a hill that once housed the capital of ancient Israel’s northern kingdom in the 8th and 9th centuries BCE and is under the auspices of the Nature and Parks Authority.Samaria National Park is located within Area C of the West Bank, which, under the Oslo Accords, is under Israeli military and civil control. However, it is surrounded by Area A, which is under full control of the Palestinian Authority, and Area B, which is under PA civil control and Israeli security control, so that a visit to the site is only possible in coordination with the IDF.Samaria Regional Council head Yossi Dagan charged that the site, which was active during the First and Second Temple periods, has been abandoned by the IDF and the civil administration even though its “historical value is priceless.”“Words cannot express the shock at seeing the flag,” he said. “This is a heritage that must be separate from any political disagreements.”His council, he explained, has called on Defense Minister Avigdor Liberman and the civil administration to protect the site.Dagan and pro-settler NGO Regavim have complained to both offices about illegal Palestinian building at and near the site, which they warned has “caused heavy damage.”The Arabs, Dagan charged, have attempted to impose sovereignty on the site.“If action is not taken it will be difficult to roll the wheel back and to preserve the place,” he said.