Palestinian official: Some voices in Fatah want to go back to suicide bombings

Senior official tells Israel Radio that "sooner or later" Fatah will be forced to join the current uprising. 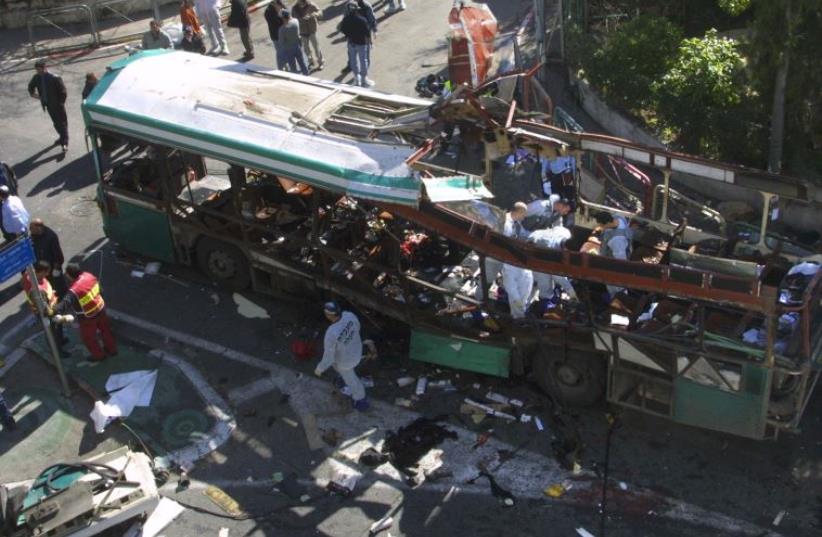 Israeli rescue workers search the wreckage of a destroyed bus following an explosion in Jerusalem January 29, 2004
(photo credit: REUTERS)
Advertisement
A senior Palestinian official said Monday that there are some voices within the leadership of Fatah calling for a return to the suicide bombings that characterized the second intifada.The official, speaking in an interview with Israel Radio Arab affairs reporter Gal Berger, added, however, that despite the voices calling for an escalation in attacks, the majority of Fatah's leadership prefer to "wait and see which way the wind is blowing."The official told Israel Radio that Fatah and the affiliated Tanzim group, which played a major part in the second intifada, would "sooner or later" be forced to join the current uprising and the spate of terror attacks seen over the last three months."We have no choice. And when it happens - all of the rules of the game will change. Hamas will feel more free to act as well. What's happening now is just the tip of the iceberg," he said.The official also addressed the state of the Palestinian Authority, saying that there is fear among Fatah's leadership that it could soon collapse. He said that the youth no longer respect the senior Palestinian leadership, citing a poll that found "65% of Palestinians want Abu Mazen (Abbas) to go home." He blamed Israel for making the Palestinian leader irrelevant.The official told Israel Radio that the next wave of violence will likely be directed against the Palestinian Authority. "Then, there will be no choice but to put into action the PLO's decision: To redefine the ties with Israel - security, economic and civilian ties."He added: "Abu Mazen said in the past that security cooperation [with Israel] is sacred, but that was under different circumstances, there was a peace process. In the current situation, it is no longer sacred."The official said that Prime Minister Benjamin Netanyahu's remarks, ahead of March's general election, that a Palestinian state would not be established during his tenure were a turning point. "That is where we lost the street. There we also met our end. What will we tell [the youth] now? Join the [Palestinian] security forces in order to defend the occupation and the settlers? They will shoot us. And that is actually what is happening now."The official warned that the phenomenon of lone wolf attacks threatens to bring something worse than the second intifada - "a mass of people operating outside of known organizations - that becomes very difficult to stop."He said that he does not see a renewal of the peace process during the remainder of US President Barack Obama's tenure, and a return to suicide bombings could potentially come when the various Palestinian groups begin competing with each other for popular support.