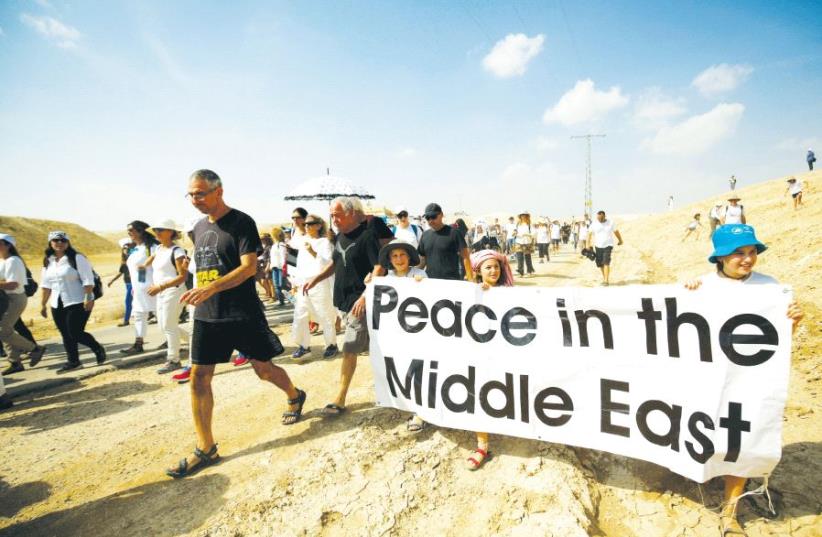 Demonstrators including Israeli and Palestinian activists take part in a demonstration in support of peace near Jericho last year
(photo credit: REUTERS)
Advertisement
A tiny minority of only 9% of Palestinians expect that 100 years from now, there will be peace between Israel and a Palestinian state, a poll found.While 9% of Palestinians expect such a peace, 12% said that the status quo will remain in place, 30% said there will be a single state that discriminates against Palestinians and 29% said there will be a war that end Israel’s military rule.The survey of 1,200 people from the West Bank and the Gaza Strip was conducted on March 14-17 by the Palestinian Center for Policy and Survey Research, a polling and research center located in the Ramallah area.Khalil Shikaki, the director of the center, said he believes Palestinians are not optimistic peace between Israel and a Palestinian state will be achieved soon because they do not think Israel is a partner for peace.“The Palestinians don’t trust the other side.They don’t think the Israelis want peace. They don’t think they are partners for peace,” Shikaki told The Jerusalem Post.In January 2018, a joint poll done by the center and Tel Aviv University found that only 37% of Palestinians believe that most Israelis want peace, while a mere 29% of Israelis think that most Palestinians want peace.