Peace process should not be 'all or nothing,' says EU ambassador 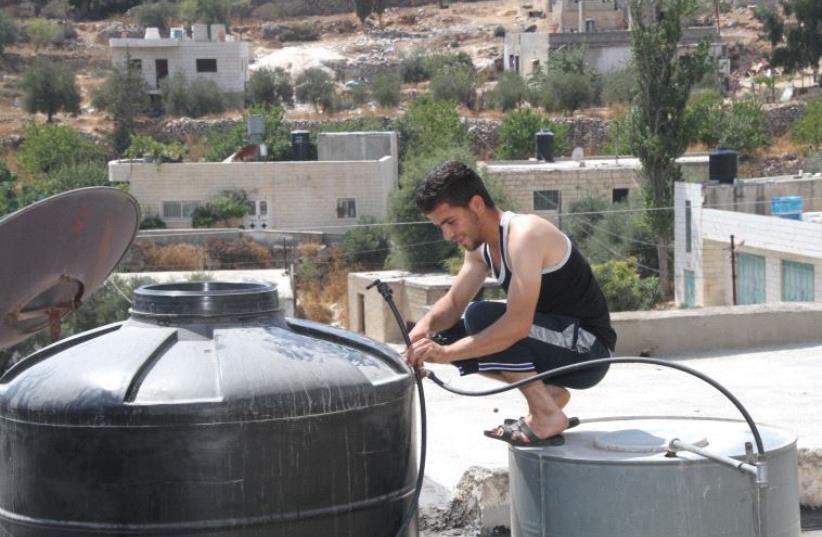 Man checking his water tank on a rooftop in Sa'ir
(photo credit: TOVAH LAZAROFF)
Advertisement
Rather than cling to an “all or nothing” peace process, the international community should promote smaller advancements in areas such as water, Lars Faaborg-Andersen, the European Union’s ambassador to Israel said at seminar in Tel Aviv.“We’ve spent too much time promoting an Israeli-Palestinian solution that is all or nothing,” he said on Thursday. “We have got to revise our approach to the peace process, which would allow us to address the issue of water and a number of other issues also. What we need to do is build up basic confidence on the ground through an approach of small steps.”Faaborg-Andersen was speaking at a roundtable discussion titled, “Can Water Bring the Political Process to a Safer Shore?” The discussion included Israeli water and security experts and politicians as well as European ambassadors, and was hosted by EcoPeace Middle East, the Institute for National Security Studies (INSS) and the German government’s Konrad Adenauer Stiftung Israel.In addition to expressing support for smaller collaborations in water and the environment, Faaborg-Andersen also discussed the potential for reviving the Joint Water Committee, the Israeli-Palestinian water management authority created after the Oslo Accords.While doing so would not necessarily be a game-changer, he said, it would be a positive step.Like Faaborg-Andersen, a variety of panelists discussed the critical need of responding to the region’s looming water crisis. Through desalination and sewage treatment have secured Israel a robust supply of water, much of the West Bank and Gaza lacks reliable drinking water and sewage infrastructure.“This is a region where we don’t have a lack of technology,” said Clemens von Goetze, German ambassador to Israel.“Here in Israel water technology is maybe the most advanced in the world. The water situation, nevertheless, is deteriorating.”Finding solutions to the water crisis “cannot wait until the peace solution is finalized,” he said.If Palestinians do not have a proper water or sewage systems, Israel also experiences detrimental effects, Gidon Bromberg, the Israeli director of EcoPeace Middle East, said.He illustrated his point by noting that 90 million liters of raw sewage flow out of Gaza every single day.“The notion of disengaging from a shared environment doesn’t work,” Bromberg said.Oded Eran, a senior INSS researcher, suggested that solving the water issue can be part of securing a larger two-state solution. Rather than awaiting finalization of such a solution, he said, successful cooperation in the water sector can happen first.Eran said that US President- elect Donald Trump must not abandon the idea of a twostate solution, but adhere to a different paradigm and attempt to solve the conflict in a stepby- step method.“We can solve certain problems on the way to obtaining the two-state solution, and water is one of them,” he said.“We are calling for the international community to try a new approach; solve what can be solved in a short time; create a new environment in the dialogue between Palestinians and Israelis that may lead to the solution of other political and emotional problems.”Prof. Arnon Soffer, a water, environment and geography expert from the University of Haifa, argued that the issue of water must be disconnected entirely from the issue of peace.It is in Israel’s moral interest to ensure that its neighbor has a robust water supply, he said.“There is no connection between water and peace.There is no reasonable excuse to bring the water as a part of the Israeli-Palestinian dispute,” Soffer said. “Water is a good reason for war, but we’re not talking about that. Let’s not connect between water and the very deep dispute of two states.”Water is a question of “to be or not to be,” he said, and Israel has the technical capacity to solve the water crisis by means of desalination.“Desalinate, desalinate and desalinate – because obviously we are headed toward a climate crisis and a human crisis. It doesn’t matter how much it costs, because this way we will prevent a war.”