Peace proposals offered by activists on Right and Left

Israelis and Palestinians came together on Monday in Jerusalem to talk about the best possible ways to achieve peace. 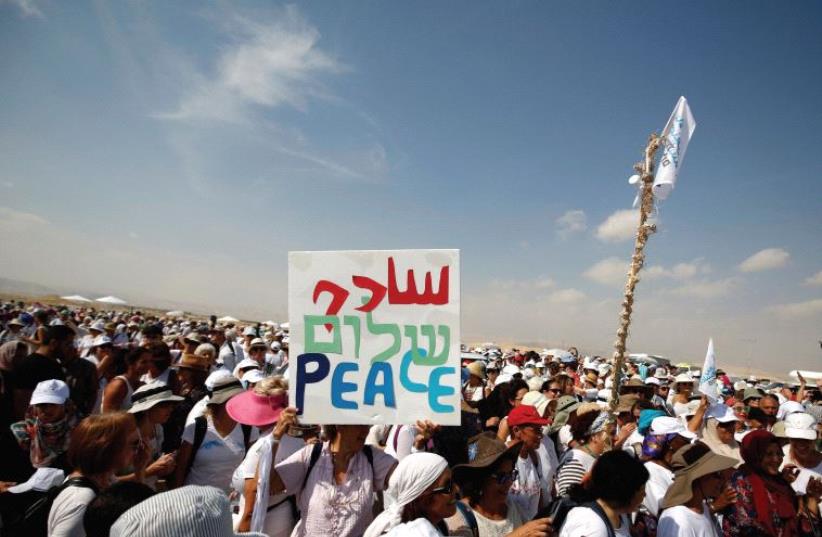 Activists, including Israelis and Palestinians, take part in a demonstration in support of peace near Jericho
(photo credit: REUTERS)
Advertisement
Experts and ideologues from the right, left and center convened in Jerusalem on Monday to present potential peace proposals at a TED-style forum, sponsored by The Israel Project (TIP).The two-hour lecture series featuring speakers from across the political spectrum was held at the Malha Technological Park Auditorium to “showcase the rich variety of initiatives,” according to TIP.MK Yehudah Glick (Likud), a well-known right-wing Temple Mount activist, who was shot four times by a Palestinian terrorist in 2014, succinctly encapsulated his one-state solution proposal into one word: “Peace.”“Peace means not destroying one side’s settlements, and peace means living together,” he said. “Beyond the Green Line today there are 2 million Palestinians and 1 million Jews, and you can’t get rid of the Jews, and you can’t get rid of the Palestinians.”Deeming the two-state solution a “part of the past,” Glick called on the government to empower both populations, with absorbed Palestinians living in the West Bank afforded the same rights as Israelis.“We have to develop the infrastructure and the educational system in Judea and Samaria within the context of a one-state solution, and the Palestinians will benefit mostly, because today’s standard of living in most Palestinian areas is so low compared to Israelis.”While Glick conceded that the present model of a “united capital” with east Jerusalem residents overwhelmingly living in poverty and a crumbling infrastructure is flawed, he nonetheless said it could be improved and incorporated into an annexed West Bank.“We’ve made mistakes and have to improve the situation in east Jerusalem, but the facts are that today you have professors from east Jerusalem working at Hadassah Hospital,” he said. “The doctor who operated on me was a surgeon from east Jerusalem.We need to give them opportunities.”Muhammad Beirtuti, a Palestinian member of Two States, One Homeland, which works with left-wing Israelis, said one state would create apartheid and should not be a consideration.“I don’t want to go down the apartheid route. I want a Palestinian state with people living with integrity and equality side by side, leaving apartheid out,” he said. “The Palestinian priority is to end the occupation; the Palestinian priority is to end the suffering.”Beirtuti dismissed the Israeli government’s claims that it does not have a partner in peace.“What really annoys us most is the fact that we talk about ‘partners in peace,’ and we are good partners,” he claimed. “I think Yasser Arafat was a great partner for peace, and Abu Mazen is the best partner the Israelis could have. The Palestinians are good partners.”Moreover, Beirtuti asserted that the occupation is not about security, but rather “segregation and apartheid,” which he said has resulted in Palestinian poverty.“We, as Palestinians, condemn apartheid,” he said. “Occupation results in poverty.Try being occupied for a week, and we will see how you will survive. It will not be easy for you to work, to do business, to export and import. This is what the Palestinians are going through; not because they chose to be poor.”Col. (res.) Yonatan Branski, a former deputy commander of the IDF's Gaza Division and founder of  the Social, National and Moral Resilience Movement in Israel, called for full Israeli sovereignty and presented the underlying principles of a six-point plan to implement it.“The Land of Israel belongs to the people of Israel, and only Israel can be responsible for its security,” he said. “We need to manage the conflict rather than resolve it, at least at this point, by preserving our assets and creating a unique and suitable composition of rights and obligations for the Arabs.”In terms of implementation, Branski stated that international recognition “is not a priority.”“First, we must apply Israeli law to Judea and Samaria unilaterally, starting with Area C, and grant citizenship to Arabs living there with full autonomy, without military components,” he said.“There should be no right of return for the 1948 refugees,” Branski continued.“There should be international involvement to help with their absorption in the Arab countries in which they live.”Additionally, Branski said, the link between Gaza and the West Bank should be “severed.”Meanwhile, moderate Jonathan Ariel of the Movement for Federal Israel, said that because a two-state solution is not presently viable, Israel should initiate an “interim solution” by annexing the West Bank and absorbing the Arab population, which he claimed is inflated by 1 million.“We don’t believe that a permanent solution is achievable at this stage, primarily because of the situation in the Arab world, which is in absolute tumult,” he said, noting the ongoing conflict between Shi’ites and Sunnis. “Therefore, we have to start out with an interim [one-state] solution, that does not close the door on a possible two-state solution.”