A report by the Knesset Research and Information Center found that several European countries limit the muezzin’s call to prayer. 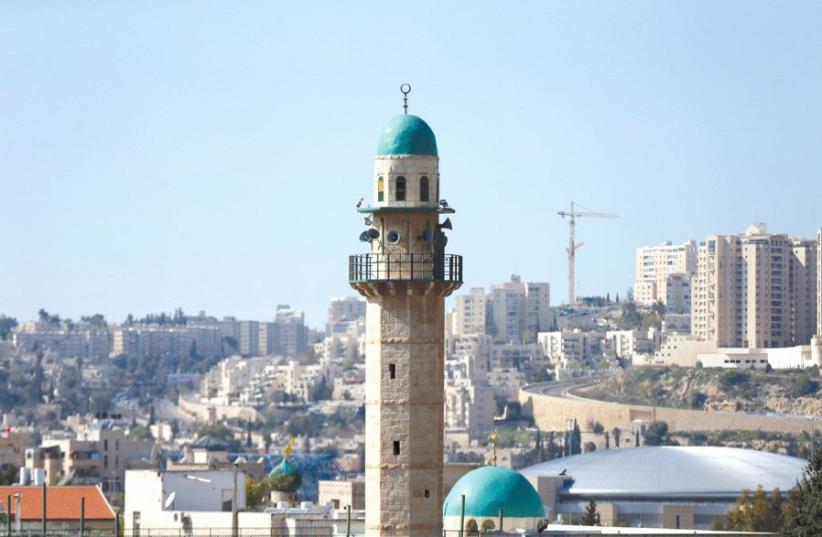 THE MINARET of a mosque is seen in the Arab neighborhood of Beit Safafa in Jerusalem
(photo credit: REUTERS)
Advertisement
Mosques that break the sound pollution laws with the call to prayer may soon have their loudspeakers confiscated, after a ministerial task force released a letter on Monday night giving conditional support for greater stringencies in the so-called “muezzin bill.”The bill proposed by Bayit Yehudi MKs Moti Yogev and Robert Ilatov and supported by Prime Minister Benjamin Netanyahu would amend the sound pollution laws to restrict the use of outdoor loudspeakers by religious institutions, which would include the Muslim call to prayer from mosques.The proposal passed a preliminary reading last March. In the new version of the legislation, Public Security Minister Gilad Erdan and Environmental Protection Minister Ze’ev Elkin added two conditions under which the bill can move forward: that it allows police to confiscate loudspeakers belonging to religious institutions that break the law and that there be a minimum fine of NIS 10,000 for violations.Ilatov said, “The time has come once and for all to regulate the issue of loudspeakers in mosques. In the whole world, including Arab countries, the matter is regulated in the law, and there is no reason for Israel to be different in this matter. Hundreds of thousands of Israelis who live in mixed neighborhoods deserve to sleep in silence.”A report by the Knesset Research and Information Center noted that several European countries have laws limiting the muezzin’s call to prayer, and in some cases, regulate the height of minarets as well. These include the Netherlands, Germany, France, the UK, Austria, Norway, Belgium and Switzerland, which bans both minarets and the muezzin’s call. Similar laws are on the books in Cairo, Saudi Arabia and in some cities in the state of Michigan.Yogev called the bill “important and moral for Jews and Arabs who want to sleep in silence... We received many responses from Jews and Arabs who asked to promote the bill.”“A century ago there were no loudspeakers,” he said, “and there’s no reason that the call to prayer should disturb people’s rest late at night or early in the morning.”Yogev’s version of the bill would silence loudspeakers from 11 p.m. to 7 a.m., while Ilatov seeks to ban them entirely. The two bills will have to be merged in committee discussions, with a final decision made as to whether the law would apply at certain times or all day.Joint List MK Goumha Azbarga called the bill “a desperate attempt by Netanyahu and his chorus to distract the public discourse from all of his scandals by fueling hatred, spreading strife and pandering to his political base... This bill is dangerous and not only harms freedom of worship and holy sites, but is a foolish attempt to trample the Arab and Islamic identity and culture of this land and push every Arab and Islamic sign out of the public arena.”MK Zouheir Bahloul of Zionist Union said the bill was designed to “increase hatred and polarization in Israeli society.”“The coalition insists on continuing to harm the fabric of coexistence and create a society that is as polarized as possible,” he said. “This is a bill led by extremists in the Knesset who want to increase hatred to protect their political power.”In late 2016, Bahloul and Likud MK Yehudah Glick organized an interfaith conference of Jewish, Muslim and Christian religious leaders who opposed the bill and called for dialogue instead.