Police say new methods to deal with nationalistically-motivated crimes will ultimately lead to a decline in the amount of price tag attacks. 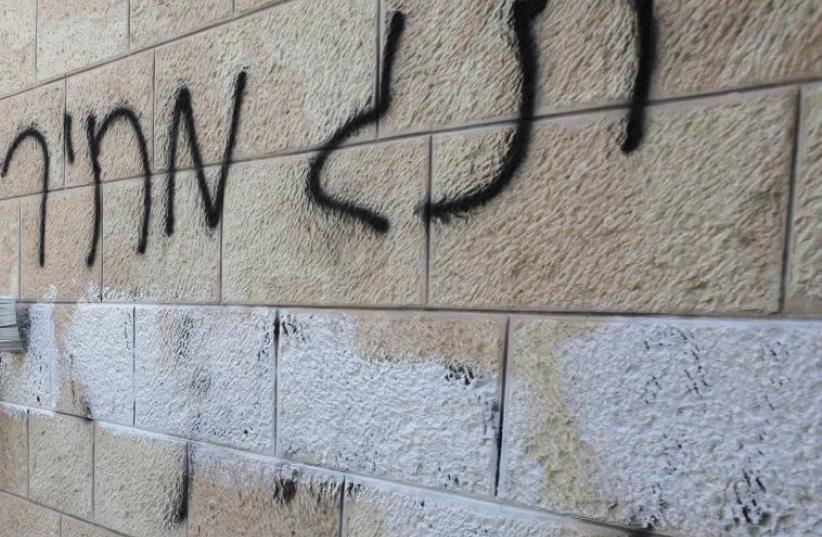 A municipal worker paints over ‘price tag’ graffiti daubed in Hebrew on a wall of the Romanian Orthodox Church in Jerusalem, May 9, 2014.
(photo credit: AMMAR AWAD / REUTERS)
Advertisement
Palestinian officials monitoring the rise in price tag attacks reported that in the last ten years, there have been 11,000 cases of attacks on Palestinians by Jews in the West Bank and in east Jerusalem. According to their statistics, 375 such attacks have occurred in the first half of this year alone. In the last five years, three Palestinians were killed in arson attacks, including Muhammad Abu Khader from Shuafat, and Sa'ed Dewabshe and his son Ali from the village of Duma.Additionally, there were arson attacks on 15 houses, 20 mosques and 4 churches.These reports further claimed that only 8% of reported cases ended in indictments against settlers, and in 85% of the complaints filed against settlers files are closed on the grounds of insufficient evidence.In response, Israeli police have said that they have been paying particularly close attention to racially-motivated crimes and have set up special units in the West Bank to monitor and deal with such hate crimes.These units, they added, have put forth major efforts and resources towards gathering  intelligence to find perpetrators of hate crimes, like price tag attacks, in order to bring them to justice. As a result of these newly enforced methods, many criminals have been arrested and indicted, as evidence by the increased number of detainees. Recently, authorities have adopted a policy of administrative detention for those accused of committing nationalistically-motivated acts, in which they can be detained for up to six months without trial. These new methods, they believe, will ultimately lead to a decline in the amount of price tag attacks. And these methods seem to be working. Data from 2014 saw a 30% increase from 2013 in the amount of cases handled by authorities, a 98% increase in the amount of criminals detained, and a 75% increase in indictments on charges of Jewish extremism. "Based on these numbers, it is safe to say that these methods are working," police said. One problem, however, is that in many instances of nationalist crimes, the suspects are minors which affects their treatment under Israeli law. Still, Israeli police have stated that they intend to continue to crack down on this wave of Jewish nationalist crime regardless of the perpetrator's age, according to the laws and in cooperation with the law enforcement authorities. Nationalist crimes, they said, or any crimes which are racially-motivated, should be treated in the same way, whether committed by Jews against the Arabs or the reverse, and lead to damage of any persons, property, or holy sites. A police source emphasized that so far,  most of these cases are by Jews against Arab Palestinians, in what is known as price tag attacks, and that statistics on these crimes have not been compiled for 2015.