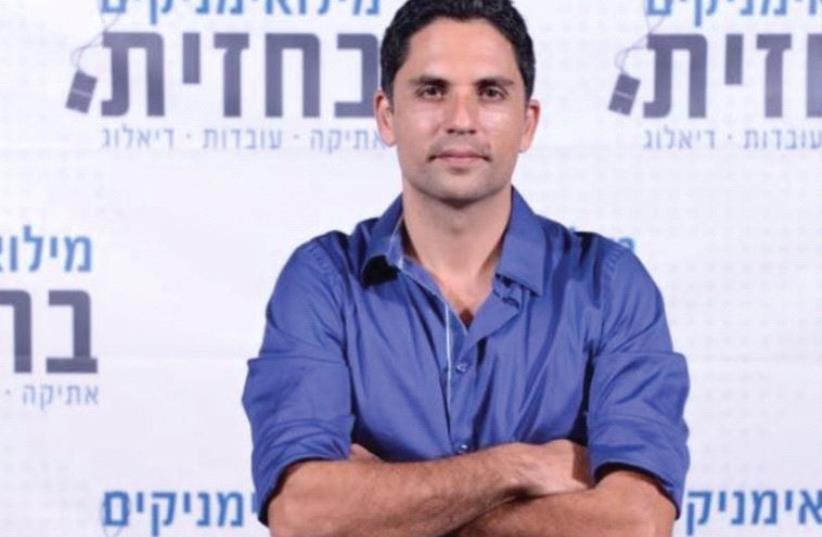 Reservists On Duty founder Amit Deri
(photo credit: Courtesy)
Advertisement
Reservists on Duty, an anti-BDS group in Israel, has called on the government to cut funding for National Service positions for the Physicians for Human Rights–Israel (PHR-Israel) NGO.“It cannot be that organizations that operate within the State of Israel against the State of Israel and the IDF will receive funding for National Service,” Reservists on Duty chairman and founder Amir Deri told The Jerusalem Post.PHR-Israel advertised that it is seeking two volunteers for National Service, the civilian alternative for youth who cannot serve in the IDF for religious, medical or other reasons.Reservists on Duty called on Agriculture Minister Uri Ariel, who oversees National Service in Israel, to cancel PHR-Israel’s state funding on the grounds that PHR-Israel’s founder and president, Dr. Ruchama Marton, attended Apartheid Week in London in 2008 and that the organization supports the BDS movement.Reservists on Duty also called on the Beersheba Municipality to cancel PHR-Israel’s participation in a course on “Equality and Justice regarding Health in the South,” run in collaboration with the municipality and other NGOs.“This is a theater of the absurd in which an organization that calls for a boycott against Israel enjoys institutional recognition and is invited to give a course in the Beersheba Municipality,” said Deri.“We call on the mayor to cancel the participation of the group and we call on the Defense Ministry to deny National Service funding,” he said.In a response, Ariel’s office issued the following statement: “We definitely see a need to ensure that the National Service will not be directed against the State of Israel, but in its favor. As such, we are working on a new law to regulate National Service so that there will be no such phenomena.”The Beersheba municipality said it “did not fund in the past and does not intend to fund in the future the activities of NGOs working against Israel, its institutions and of course the IDF.“This is an academic course in partnership with many institutions and public organizations discussing the issue of minimizing health gaps in the country in order to prevent any harm to the residents of the South, who currently receive fewer services than the rest of the citizens in the country.“It is regrettable that there are certain elements who are wrong and are misleading the public.“While unfounded claims are being made, the Beersheba Municipality continues and will continue to vigorously promote the issue of Health in the South.”This is not the first time that Physicians for Human Rights has been in the spotlight for its activities. In February, the organization was the center of a debate in the Knesset Finance Committee on taking away the tax-exempt status of anti-Israel NGOs, which ultimately failed.In the Knesset committee discussion, right-wing MKs noted that PHR had contributed information claiming Israel committed war crimes to the infamous Goldstone Report on Operation Protective Edge, which was widely condemned as biased and inaccurate.South African jurist Richard Goldstone, who headed the investigation, eventually retracted claims that Israel targeted civilians.Bayit Yehudi MK Bezalel Smotrich also pointed out that PHR has participated in Israel Apartheid Week in London and sponsored an exhibit of drawings depicting IDF soldiers aiming at Palestinian civilians.PHR-Israel responded in a statement that said: “It is unclear how a course that deals with equality in health, which aims to close the severe gaps between the Center and the periphery in Israel, has motivated Reservists on Duty to act against it, especially that in order to do so they need to bring up an event from a decade ago. Anyway, Physicians for Human Rights – Israel is not a part of the boycott movement.“The attempts of these and other agents to undermine in various ways the organization’s activities, which together with thousands of medical professionals and our dedicated volunteers, acts for the good and wellbeing of Israeli society, are part of an attack against civil society organizations that do not share their ideological views. We are pleased that, unlike them, the course has managed to create cooperation and to connect between different organizations and has won great interest, demonstrated by the high number of applicants.”PHR-Israel also noted that it does in fact have funding for two National Service volunteers, though to date it has not filled these positions.Lahav Harkov contributed to this report.