The EU's Federica Mogherini said Thursday that bringing about a solution "is as much in Europe's interest as it is in the interest of the region." 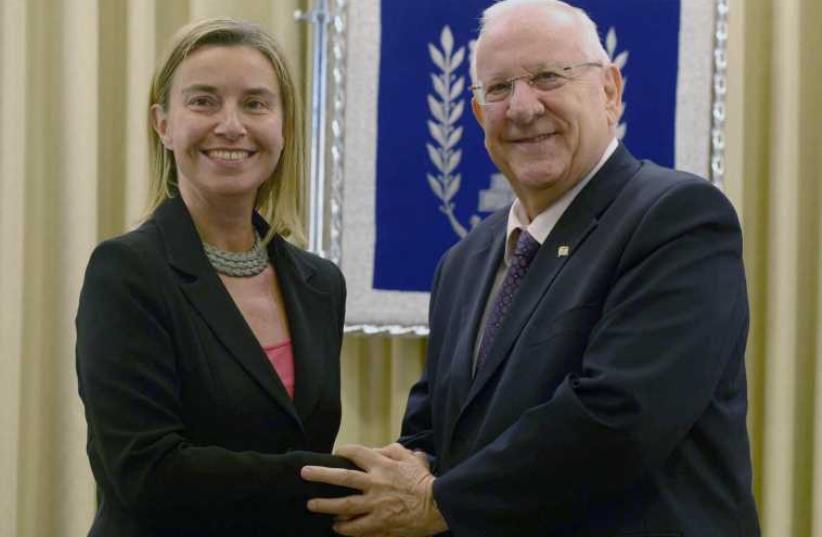 President Reuven Rivlin meeting with the European Union's foreign policy chief Federica Mogherini‏.
(photo credit: Mark Neiman/GPO)
Advertisement
Israel knows the importance of the role that Europe takes in trying to bring the tragedy of the 150-year-old conflict between Israel and the Palestinians to and end, President Reuven Rivlin told Federica Mogherini, the high representative of the European Union for foreign affairs and security policy on Thursday. Rivlin was confident that the conflict can be overcome with the help of sincere elements from the Western world but emphasized that in the final analysis, the conflict can be resolved only by agreement by the two parties themselves. Alluding to Prime Minister Benjamin Netanyahu's commitment to a two-state solution to the conflict, Rivlin said that he had heard what Netanyahu said to Mogherini the previous day and that the whole of Israel had heard it. "The whole world had heard it," he said. Rivlin also said that Israel knows that Mogherini is in the country to help build confidence between the two parties. Mogherini said that she had come to bring a message of hope, peace and friendship. She said that she shared Rivlin's vision of bringing the two sides together in peace and security, which is as much in Europe's interest as it is in the interest of the region.On Monday Mogherini said that there was “political meaning” in her coming to Jerusalem so soon after the formation of Netanyahu’s new government, and that the message is that the EU “is ready and willing to play a major role in relaunching the peace process on the basis of the two state solution.”She said that that her visit would also be an opportunity to listen to the perspectives of the sides, gauge their intentions and “see how to overcome the status quo.”Herb Keinon contributed to this report.