“The fight now moves to inside the Knesset,” Beit El Council head Shai Elon said on Sunday at a press conference in a protest tent settlers set up last week outside the Knesset. 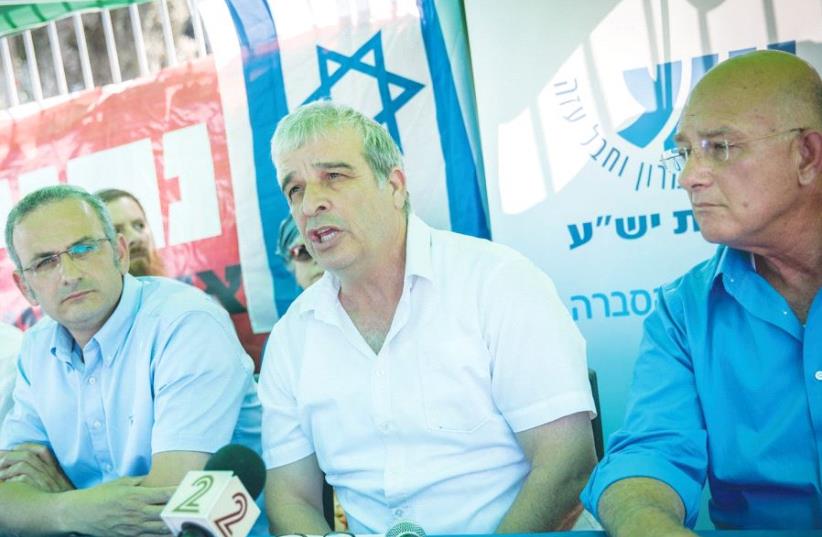 YESHA COUNCIL HEAD Avi Ro’eh speaks during a press conference at the protest tent of Beit El residents in Jerusalem yesterday.
(photo credit: YONATAN SINDEL/FLASH 90)
Advertisement
Settlers plan to lobby right-wing members of the Knesset on Monday to take action on the marketing freeze for new housing projects in their communities.The Knesset Land for Israel Caucus is also weighing introduction new legislation on absence of tenders, including for the 300 homes in the Beit El settlement.Prime Minister Benjamin Netanyahu has excluded the 300 Beit El homes from the freeze, pledging to market them by September. But after five years of waiting for the project, settlers believe the units should be marketed now.“The fight now moves to inside the Knesset,” Beit El Council head Shai Elon said on Sunday at a press conference in a protest tent settlers set up last week outside the Knesset.“We want to pass a law requiring the government to uphold the decisions it passes,” he said.Avi Ro’eh, who heads the Council of Jewish Communities of Judea and Samaria, said Netanyahu must keep the promise he made five years ago to build the homes.“We have heard from those close to Netanyahu that no more marketing will occur in 2017, aside from the 300 in Beit El. We want to strongly protest.After 50 years, when we are celebrating the jubilee year, we can’t determine building in Judea and Samaria based on the whim of our neighbor Abu Mazen, who continues to pay terrorists,” Ro’eh said, using another name by which Palestinian Authority President Mahmoud Abbas is known.The time has come to take the courageous step to normalize settlement construction by divorcing it from diplomacy and politics, he said at the protest tent.Ariel Mayor Eli Shaviro suggested that Netanyahu automatically provide marketing for approved projects by eliminating current bureaucracy that requires additional decisions be made on the matter.Gush Etzion Regional Council head Shlomo Ne’eman said, “We have to ask who is sovereign in Judea and Samaria.”Ne’eman said the next generation, returning from their army service and trips abroad, need new homes so they can live in the communities in which they grew up.The time has come for the residents of Judea and Samaria to stop living under military rule, he said. “We are not a project, we are a fact.”In the first three months of 2017, the 2,858 tenders were published for settlers’ homes, the highest in more than 15 years. The freeze is not expected to impact those projects.