Shin Bet says there is a growing motivation by Hamas in Gaza to carry out terror attacks in the West Bank.

By ANNA AHRONHEIM
JANUARY 1, 2018 14:20
Hamas members
(photo credit: REUTERS)
Advertisement
Security forces have arrested a five-member terrorist cell in the West Bank, the Shin Bet (Israel Security Agency) announced on Monday.
The cell members had been active in promoting terrorist attacks under the guidance of a Hamas activist in the Gaza Strip, according to the agency, and were arrested in November in a joint operation by the IDF, Israel Police and Shin Bet.During the investigation it was revealed that the man behind the cell was Abdallah Arar, a Hamas activist who was involved in the 2005 abduction and murder of Jerusalem resident Sasson Nuriel. Arar had been deported to the Gaza Strip as part of the Gilad Schalit prisoner-exchange deal. 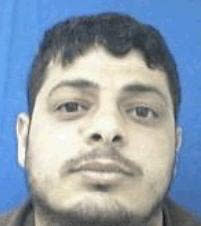 Abdallah Arar, the man behind a West Bank Hamas cell busted by the Shin Bet. (COURTESY SHIN BET)According to Shin Bet, Arar had instructed Alaa Salim to set up the cell. He then transferred money to Salim, a resident of the West Bank village of Jab’a southwest of Bethlehem, for Salim to purchase an M16 rifle so the cell could carry out an attack as soon as possible.Salim then approached another resident of Jab’a, Rian Tuam, and asked him to help purchase an M16 rifle, giving him thousands of shekels to do so. Salim also turned to Sehada Tuam and asked him to recruit activists to join his cell. Meanwhile, Tuam recruited Mahmoud abu Arkov, a young Hamas operative from a-Ram.“Recently there has been a growing motivation by Hamas headquarters in the Gaza Strip to carry out terror attacks through operatives in Judea and Samaria,” a Shin Bet statement said.“The security forces will continue to act decisively to thwart Hamas’s efforts to carry out attacks in Israel, and make it clear that Hamas in the Gaza Strip will be responsible for any attack that they direct.”The investigation into the cell was conducted in coordination with military prosecution, which examined the probe’s materials before deciding to indict the suspects.Since the beginning of the latest wave of violence hit Israel and the West Bank, numerous Hamas attacks have been thwarted by security forces. In late December, Shin Bet chief Nadav Argaman announced that the agency had thwarted more than 400 terrorist attacks in 2017, including 13 planned suicide attacks, eight kidnappings and 1,100 potential lone-wolf attacks.He further noted that 54 attacks were successfully carried out in 2017, compared with 108 that succeeded in 2016.
Speaking to lawmakers during a Knesset Foreign Affairs and Defense Committee meeting, Argaman warned, “The [period of] quiet we are experiencing is misleading; Hamas is hard at work trying to execute terrorist attacks.”