According to police, after causing the crash, the four suspects fled the scene and met again to coordinate their alibis if arrested. 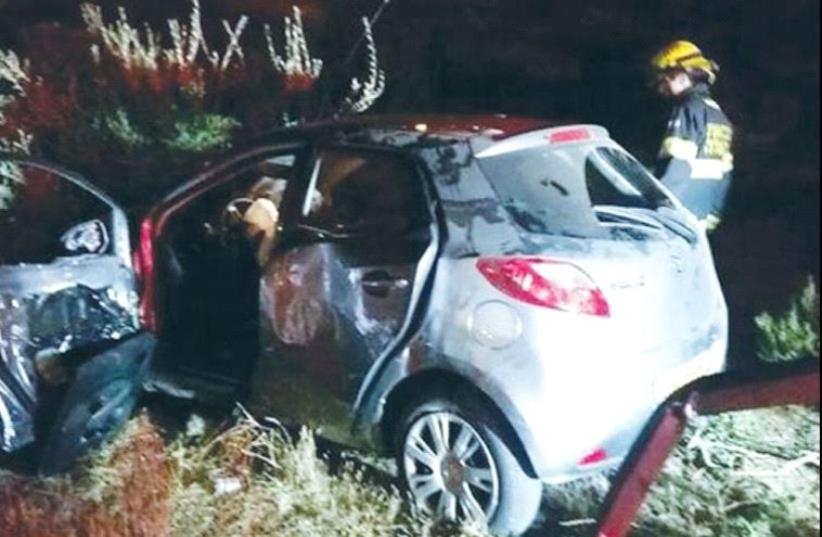 THE CAR Alexander Levlovitz was driving during his fatal collision.
(photo credit: ARIK ABULOFF / JERUSALEM FIRE AND RESCUE SERVICES)
Advertisement
Thirteen months after hurling rocks from a Jerusalem highway overpass that shattered the windshield of a car driven by Alexander Levlovitz, causing his fatal crash, one of the four Palestinians arrested agreed to a nine-year prison term in exchange for testifying against fellow terrorists.Levlovitz, 64, a grandfather from Armon Hanatziv, died hours after losing control of his vehicle on Rosh Hashana eve and crashing into a pole, while driving home with his two daughters following dinner at a friend’s home. His two daughters were also seriously wounded in the crash.A joint police and Shin Bet (Israel Security Agency) investigation determined the rocks were thrown by four youths from the neighboring Arab village of Sur Bahir, all of whom subsequently confessed to the crime.The rock causing the deadly collision was thrown by Mahmoud Abed Rabbo Doiat, 20. On Sunday, Doiat accepted a plea deal at Jerusalem Magistrate’s Court, with the stipulation that he testify against his three co-defendants: Muhammad Abu Salah, 19, Fares Mostafa Walid Atrash, 19, and a fourth minor, whose age prohibits publication of his name.Doiat said he wore a Hamas flag he received earlier in the month at an “Al-Aksa is in Danger” demonstration against the banning by the Defense Ministry of two groups from the radical Northern Branch of the Islamic Movement from the Temple Mount. The rally was organized by Hamas and the Islamic Movement, according to security forces, and precipitated what some have deemed the deadly “knife intifada.”According to police, after causing the crash, the four suspects fled the scene and met again to coordinate their alibis if arrested. Shortly after the arrests were announced, Levlovitz’s family issued a statement saying that, while they were grateful to security forces for apprehending the suspects, “the mission is not complete.”“It is important to increase the punishment for rock-throwing and bring the perpetrators of these crimes to justice, because rocks murder,” the statement said.Prime Minister Benjamin Netanyahu visited the site of the crash to declare “war” against those who throw rocks and firebombs.“On the eve of the Jewish New Year, we once again saw how throwing stones can kill,” Netanyahu said in a statement. “These kinds of activities will be met with a very fierce punitive and deterring response. We will institute a system-wide change, and set a new standard of deterrence and prevention.”Shortly after, the security cabinet approved an array of more punitive measures against rock and firebomb- throwing assailants, including the easing of police open-fire regulations, setting a minimum prison sentence of five years, and fines of up to NIS 100,000.Since Levlovitz’s death, police have arrested more than 300 Palestinian rock and firebomb-throwing suspects in the flashpoint Arab neighborhoods of east Jerusalem. In April, the IDF and Israel Police sealed off Doiat’s home.