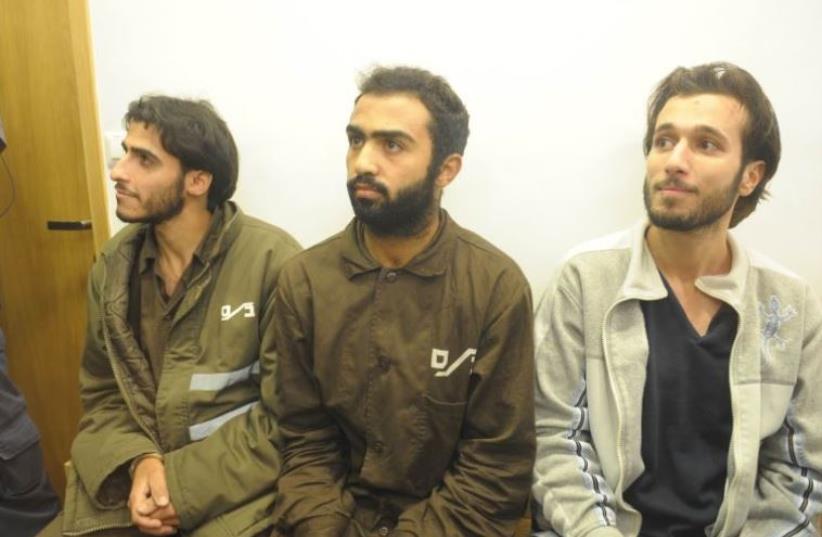 Three Yata residents indicted for the June 8 shooting attack at the Sarona Market in Tel Aviv, July 4, 2016
(photo credit: AVSHALOM SASSONI)
Advertisement
Three terrorists involved in the shooting spree that killed four Israelis at Tel Aviv’s Sarona market on June 8 were indicted in the Tel Aviv District Court on Monday.Two were indicted for murder, and one for aiding and abetting the terrorist attack.In the investigation’s findings, the two, Khaled Mahamrah, 20, and Mahmoud Mahamrah, 21, said they were inspired by ISIS, though they carried out the attack without being formally recruited or trained by the terror group.The two are cousins from the West Bank town of Yatta near Hebron.
IDF arrests Yata resident who aided Sarona terrorists‏
According to the indictment, during the brutal shooting, the two terrorists came to the market and opened fire randomly on civilians at the Max Brenner Café and its surrounding.Mahmoud became an ISIS admirer while studying in Jordan before returning to Yatta in January 2016.Khaled started to think about a terrorist operation in August 2015 following the infamous murder of the Palestinian Dawabshe family of Duma that July.The third man indicted for aiding and abetting, Yunis Aish Musa Zin, 21, also of Yatta, had planned to carry out the attack along with the other two terrorists.However, at the last second, the Mahmarah’s said he could not participate because he had debts and Islam forbids martyrdom while holding debts.Zin also admitted to helping to supply the alleged murderers with their weapons, including a Carl Gustav sub-machine gun, which was found at the scene of the attack.The indictment said that Khaled and Mahmoud originally conspired to attack passengers traveling on a train.Their plan included purchasing clothing to look like businessmen as well as getting haircuts and making other adjustments to their looks to fit the part.They made their way from the West Bank to Beersheba to attack passengers there, but changed their plans when they saw the train station’s metal detectors.Instead they took a cab to Tel Aviv near the Azrieli Mall.There they asked passers-by where they could find a cafe to eat at – with the plan to find a popular venue filled with people to shoot at.Passers-by directed them to Sarona where they carried out the attack.They continued to fire on the crowds until their weapons jammed. They then fled as security forces fired at them unsuccessfully.The two terrorists split up as they were running from the scene.Khaled was caught first when he was later shot and wounded by a member of the security forces.Mahmoud blended in with a family that ran into their home from the street to hide from what everyone heard were terrorists freely running through the streets of Tel Aviv.He was later arrested in the home by security forces when they ascertained his true identity.The coordinated terrorist assault on Tel Aviv’s Sarona Market on June 8 was one of the deadliest attacks in the city since Palestinian violence erupted anew last October.Jerusalem Post staff and Ben Hartman contributed to this report