Dozens of other Palestinians were wounded in violent clashes with security forces in Ramallah, Hebron and outside of Bethlehem. 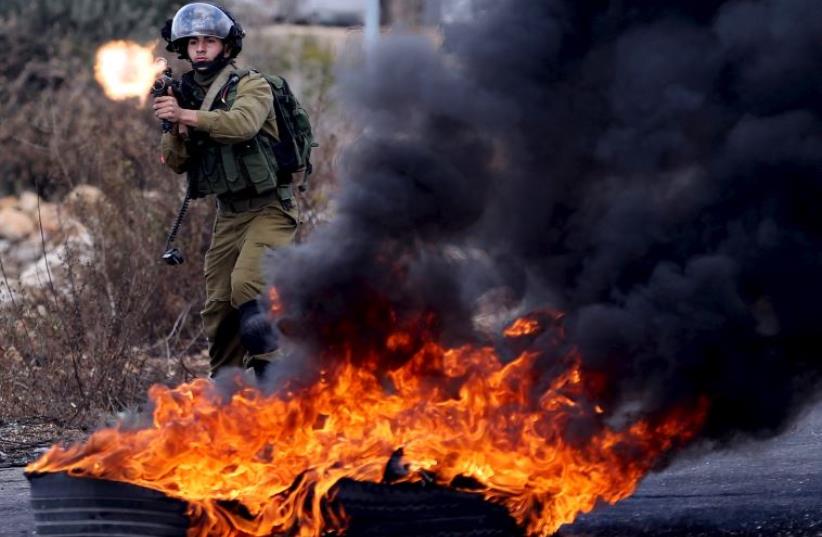 An Israeli soldier fires a weapon towards Palestinian protesters during clashes near the Jewish settlement of Beit El
(photo credit: REUTERS)
Advertisement
An Israeli civilian, an American and a Border Police officer were wounded and three Palestinian assailants were killed over the weekend as knife-wielding Arabs carried out attacks in Jerusalem and the West Bank.Dozens of other Palestinians were wounded in violent clashes with security forces in Ramallah, Hebron and outside of Bethlehem.In Jerusalem, which has been largely quiet for the last few weeks, an Arab with a drawn knife charged at pedestrians who stood by a light-rail train station near Ammunition Hill on Friday, according to police spokesman Micky Rosenfeld.He stabbed an American student, 22, in the chest, and then tried to stab another student.Police, security guards and an armed civilian in the area, shot him in a hail of bullets.In the crossfire, a 20-year-old Israeli man was struck in the leg, and was transferred to the capital’s Hadassah University Medical Center on Mount Scopus in moderate condition. No charges are to be filed against the security guards who accidentally wounded the young Israeli.The American victim was rushed to Jerusalem’s Shaare Zedek Medical Center in light-to-moderate condition, police said.Magen David Adom paramedics at the scene said both victims were fully conscious and were expected to recover.The terrorist, 23, from east Jerusalem, was treated at an area hospital but died.Rosenfeld said nearly 5,000 Border Police officers, including multiple special task forces assisted by the Shin Bet (Israeli Security Agency) and the IDF, continue to patrol the capital at the highest state of alert.“Police are leaving nothing to chance, and will continue to prevent terrorist attacks, and immediately neutralize those who carry out attacks,” he said.In the West Bank on Friday, where the bulk of the attacks have occurred in the last few weeks, two Palestinian assailants drove a scooter up to the Tapuah junction checkpoint on a scooter and then drew knives and stabbed one of the Border Police officers stationed there in the hand. Border police killed one of the assailants and seriously wounded the other.On Saturday morning, a Defense Ministry Crossings Authority guard killed a Palestinian terrorist at the Gilboa crossing north of Jenin.According to a Defense Ministry spokesman, the incident occurred when a Palestinian terrorist ambushed a security guard after hiding behind a taxi.The security guard was combing the area when the terrorist began running toward the officer holding a weapon in his hand. After ordering the assailant to stop several times, the officer readied his weapon and killed the suspect.Following the incident, the IDF closed the crossing to all traffic. The attack came one week after a Palestinian youth posing as a candy vendor tried to stab a security guard in the same location, before being shot dead.In multiple locations in the West Bank, Palestinian rioters clashed with security forces.On Friday, the Palestinian Health Ministry said an eight-month-old baby had died in the village of Beit Fajar outside the city of Bethlehem, as result of inhaling tear gas fired by the IDF in the area.Hospital officials told Reuters the infant had a prior health condition and that it was unclear what had caused his death.An IDF spokeswoman said forces confronted with stone-throwing Palestinians had used tear gas in the area, but that it was fired dozens of meters away from the home of the family and that an investigation concluded there was no direct link to the baby’s death.Other clashes occurred in the village of Beit Umar, on the outskirts of Ramallah and in Hebron.On Saturday in Hebron, thousands rallied at a public funeral for five Palestinian assailants killed by Israeli security forces in past weeks. Israel initially withheld their bodies in an effort quell the incitement it said stems from such large funerals in which the assailants are treated as innocent martyrs.On Friday, it agreed to release five of the 11 bodies it was holding, on the understanding that a large funeral would not be held.Also on Saturday in Hebron, 10 Palestinian rioters were shot and injured by IDF low-caliber rounds during a violent clash near the policeman’s check point on the side of the city that is under Palestinian civil control.An army spokeswoman said some 100 Palestinians launched a violent disturbance at the checkpoint, hurling rocks, firebombs, burning tires and firing marbles from sling shots.The IDF responded with low-caliber rounds, aiming at the legs of rioters.The condition of those wounded was not known to the army.Reuters contributed to this report.