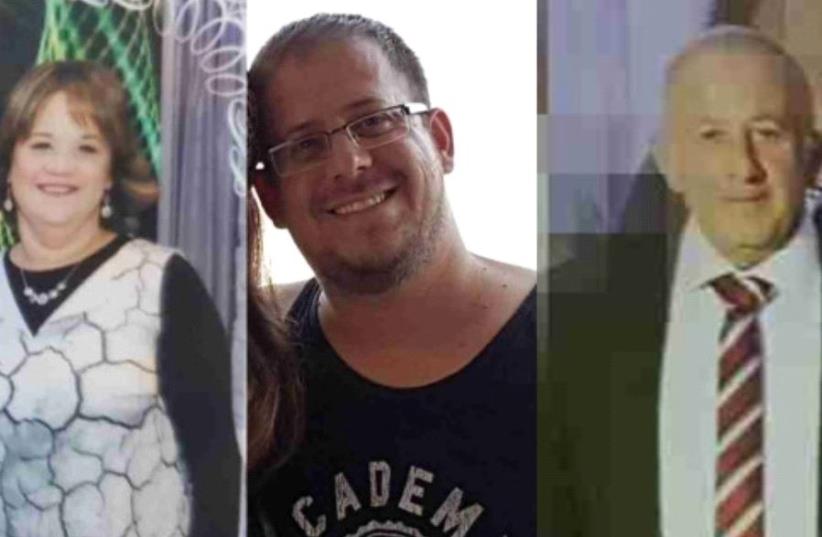 The three victims of the lethal attack in Halamish.
(photo credit: COURTESY OF THE FAMILY AND THE MUNICIPALITY OF ELAD)
Advertisement
Three weeks after a Palestinian terrorist murdered a father and his two children in their West Bank home, Border Police and the IDF on Sunday arrested two more members of the killer’s family accused of knowing about the attack in advance and doing nothing to stop it.Police spokesman Micky Rosenfeld confirmed the preedawn arrests, but noted that a gag order in the ongoing investigation precludes police from providing further details until both unidentified suspects have been questioned.He added that several other suspects not related to the terrorist have been arrested and questioned.On July 21, Ombar al-Abed, 19, stabbed to death Yosef Salomon, 70, his daughter Chaya, 46, and his son, Elad 36, and seriously wounded Yosef’s wife, Tovah, while they sat down for Shabbat dinner in their house in Halamish, an Israeli settlement in the southwestern Samarian hills.Abed, a resident of the nearby Palestinian village of Khobar, climbed the security fence surrounding the settlement armed with a knife. He was shot by the victims’ neighbor, an off-duty IDF officer, and placed under arrest.Abed, who carried a copy of the Koran and bottle of water to “purify” himself, said he carried out the grisly murders to protest Temple Mount tensions.Days following the attack, the killer’s mother, father and brother were arrested in Khobar for incitement after they called on Palestinians to kill Jews, and were accused of having knowledge of the attack before it was carried out.Abed’s home is slated to be demolished.