A “perfect storm” of events could make life in Gaza unsustainable. 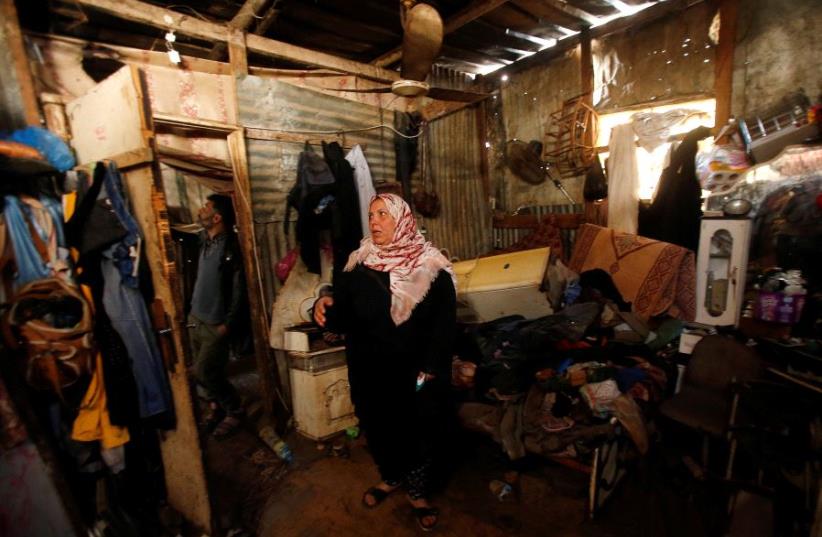 A Palestinian woman inspects her shelter that was flooded during a rainstorm, in the northern Gaza Strip.
(photo credit: REUTERS)
Advertisement
Gaza’s latest electricity crisis could be “the tipping point” that makes the Strip unlivable for its two million residents, a UN official told The Jerusalem Post on Sunday.“The UN has been warning for some years that the chronic problems of Gaza are accumulating to the extent that we may be approaching a tipping point at which Gaza becomes unlivable,” said Robert Piper, coordinator for humanitarian aid to the Palestinians.Piper’s comments came after the Gaza power plant shut down on Sunday due to a lack of funds to pay the hefty taxes imposed by the Palestinian Authority in the West Bank on the diesel fuel necessary to run the plant.It is one more blow for the Hamas-controlled enclave, where unemployment is at 42% and fresh water is a scarce commodity.
Egypt begins allowing goods through its border to Gaza on February 8, 2017 (credit: REUTERS)
Gaza will now operate on only four hours of electricity a day, down from eight. The plant had hit a crisis point in December that was averted by tax-free donations from Qatar and Turkey that provided the necessary diesel fuel.But the funds and fuel have run out, and Fatah has insisted that any additional fuel must be fully taxed.“There is the political issue of getting Ramallah and Gaza on the same page. There is a lack of trust and transparency about how much revenue is raised and where that revenue ends up,” Piper said.Demand for power in Gaza is at about 450 to 500 megawatts of power per day, but it often gets less than half of that. About 27 MW are imported from Egypt, as well as 125 MW from Israel. The plant can generate 110 MW when operating at full capacity.Restoring the normal flow of electricity in Gaza would involve renovation and infrastructure work.To help fix Gaza’s electricity problem and to make it “dramatically cheaper,” the Gaza power plant could be run on natural gas, Piper said. The plant would need to be renovated to shift it from a diesel-based operation, Piper continued, adding that the project could be done in stages.As it is, however, damage from the Israeli bombing of the plant in 2014 has yet to be fully repaired.The plant is still waiting for Israel to clear the materials necessary to finish the fuel storage units, Piper said.Israel does not always allow in necessary “dual use” items for fear that they will be diverted by Hamas for military use.Piper said that aside from the power plant, Israel could increase the amount of electricity it sends to Gaza, but infrastructure would need to be upgraded. The first phase of that project could be done in eight months, he added.At present, 30% to 40% of the electricity is lost in transmission because of poor infrastructure, Piper said.“You have political and trust problems. You have a funding issue. You have the absolute pivotal question of whether Israel will allow the necessary material to go in, and so on,” he added.When looking at the larger picture of the crisis, Piper was clear that the primary cause is the restrictions on the freedom of movement of goods and people through the three crossings into the Strip, which have made a viable economy impossible.Israel controls two of the crossings, and Egypt is in charge of the third.Israel has placed restrictions on the Gaza passages since Hamas ousted Fatah from the Strip in a bloody coup in 2007.On top of that, there is the destruction caused by the three wars between Israel and Hamas that occurred between 2008 and 2014.“Half of Gaza’s population is food insecure,” Piper said, and some 40% of the population can access water for only five to eight hours every two to three days.Some 40,000 people are still displaced from the 2014 Gaza war and are dependent on humanitarian assistance.In addition, in the last six months Israel has limited the number of Gaza residents who can leave to seek medical attention.The mix of all these problems, Piper said, has created a “perfect storm” of events that could make life in Gaza unsustainable.