Israel’s Ambassador to UNESCO says the resolution is “a total Islamization” of a site that is revered by both the Jewish and Muslim faiths. 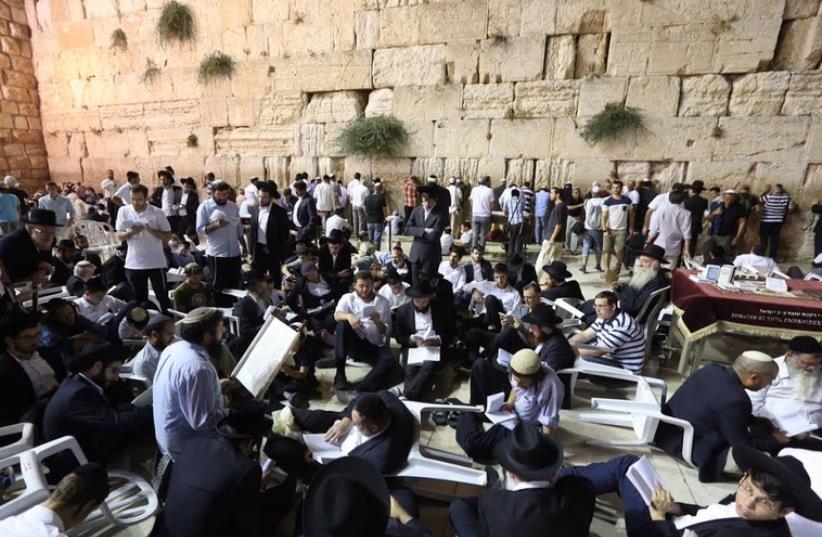 Worshippers at the Western Wall on the eve of Tisha Be'av, July 25, 2015
(photo credit: MARC ISRAEL SELLEM/THE JERUSALEM POST)
Advertisement
Israel is working to thwart a draft UNESCO resolution which declares that the Western Wall in Jerusalem – the most holy site in Judaism – belongs to al-Aksa Mosque compound.The draft text to be voted on Wednesday in Paris states that UNESCO “affirms that the Buraq Plaza is an integral part of al-Aksa Mosque/al-Haram al-Sharif.”Israeli Ambassador to UNESCO Carmel Shama Hacohen called the resolution “a total Islamization” of a site that is revered by both Jews and Muslims.The six-page draft resolution – submitted by Egypt, Tunisia, Algeria, Morocco, Kuwait, and the United Arab Emirates on behalf of the Palestinian Authority to the UNESCO Executive Board – broadly condemns Israeli actions in Jerusalem, the West Bank, and Gaza.At no point does the resolution mention the Jewish historical connection to Jerusalem, which dates back to biblical times. Nor does it reference the Temple Mount or the Western Wall, which was part of the retaining wall King Herod built for the Temple Mount more than 2,000 years ago. It also relies solely on Arabic names for the holy sites on and around the Temple Mount.Deputy Foreign Minister Tzipi Hotovely added that the resolution is an attempt by the Palestinians to rewrite history, by going after one of the essential foundations of Judaism.In the past, the United Nations Educational, Scientific, and Cultural Organization has typically approved resolutions condemning Israeli actions in Jerusalem, but none of those texts has attempted to reclassify the Western Wall.The Palestinians are expected to have an automatic majority among the 58-member states of the UNESCO Executive Board for a broad based anti-Israel resolution on Jerusalem and the Temple Mount, Hacohen told The Jerusalem Post in an interview from Paris. The ambassador added that he does not believe the support exists to reclassify the Western Wall as part of a religious Muslim site.The resolution may fail unless the line about the Buraq Plaza is removed, he added.“To disconnect the Jewish people from the Western Wall is one step too much, even for nations that are the most anti-Israel,” Hacohen said. He noted that “the timing is also problematic, since the Temple Mount issue has already sparked Palestinian violence against Jewish citizens of Israel.”The Palestinians have accused Israel of attempting to violate the status quo on the Temple Mount, which is under the custodianship of the Wakf Muslim religious trust and the Jordanian monarchy.Israel has rejected all such claims and insisted that it is committed to maintaining the status quo.Aside from the issue of the Western Wall, UNESCO solely condemns Israeli actions on the Temple Mount, Hacohen said. “It gives a stamp of authenticity to Palestinian violence against Israel.” Israeli video evidence showing how its security forces had been attacked by Palestinians on the Temple Mount have not impacted the international narrative that holds Israel accountable for the situation, he said.The draft text, “deplores the continuous storming of al-Aksa Mosque/ al-Haram al-Sharif by the Israeli right wing extremists and urges Israel, the Occupying Power to take necessary measure to prevent provocative abuses that violate the sanctity and integrity of al-Aksa Mosque.”It also “decries the Israeli violations, abuses, works and excavations on the Temple Mount, including “the large number of arrests and injuries among Muslim worshipers.”If UNESCO approves a resolution that Israel is harming Muslim worshipers “it only adds more fuel to the fire,” said Hacohen, warning that “both sides will pay in blood for that decision.”Among the 58 countries on the UNESCO Executive Board are the US, Great Britain, Germany, Italy, Spain and France. The US plans to oppose the resolution, but some of the Europeans are working to amend the text, with an eye to supporting it, Hacohen said.What is needed now, he added, “is a calming message from UNESCO.”The resolution is not the first time that UNESCO has made waves with regard to the Israeli-Palestinian conflict.In 2011 UNESCO’s General Conference became the first UN body to accept “Palestine” as a member state.