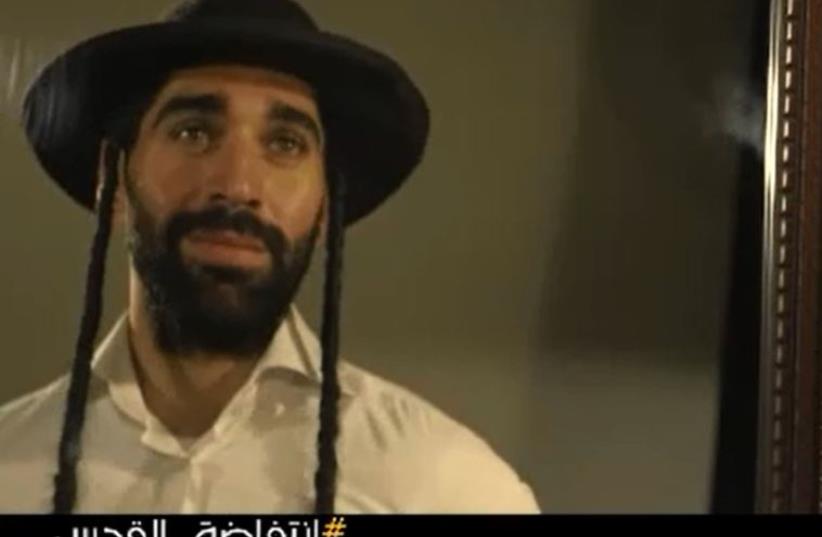 Still from Hamas video praising June 8 terror attack in Tel Aviv
(photo credit: screenshot)
Advertisement
Following the Tel Aviv terror attack at Sarona market on the evening of June 8, reactions around the Arab world have varied from half-hearted governmental condemnations to public celebrations. Palestinian Authority President Mahmoud Abbas' office released a statement rejecting "all operations that target civilians regardless of the source and their justification."A statement that may condemn targeting civilians but at the same time points out that he himself isn't the source of such violence and that some type of justification does indeed exist. Just one day after the attack, Hamas released a celebratory video on Facebook and YouTube praising the attack and proclaiming the gunmen as 'shaheeds ' - a term used as a honorific for Muslims who have died fulfilling a religious commandment. The video, translated by MEMRI (the Middle East Media Research Institute), portrays a reenactment of the Sarona attack with the hashtag "al-Aqsa Intifada" at the bottom of the screen, referring to the recent wave of violence that erupted in October. An Arab man is shown at his home in Hebron breaking the Ramadan fast then proceeding to dress himself up as a religious Jewish man then load his assault rifle. After the shooting he is seen lying on the ground covered in blood with the quote "reward is certain, if Allah wills it," a Muslim blessing upon the breaking of the fast. A second such video, also translated by MEMRI, comes from a comedy show on Al Jazeera featuring Egyptian comedian Abdallah Sharif. In the skit, Sharif and another man discussed the terror attack while making sure to 'correct' the terms being used for an anti-Israel spin, such as not using the term 'Israeli' as it admits to the existence of the state of Israel and referring to the victims as "occupying Zionist Jews." Additionally they criticized Egyptian journalist Bothania Kamel for her condemnation of the attack.