WATCH: Israeli forces face off with settlers during outpost eviction

Reports of clashes between activists and border police on the scene.

Residents of Nativ Ha’avot speak about the destruction of the West Bank outpost, November 29, 2017. (Tovah Lazaroff)
Advertisement
Netiv Ha’avot residents and IDF reservists plan to rebuild the small carpenter’s shack – that Israeli security forces destroyed on Wednesday morning in accordance with a High Court of Justice ruling.The shop owner serves in the reserves. Prior to the demolition, he had placed a large sign on top of the wooden and tin structure that stated: “I serve in the reserves and they are destroying my house.”
Police and IDF spokespeople said that there were no arrests during the evacuation, which was carried out as planned with little violence.
פינוי מפגינים בנתיב האבות. צילום: קרני אלדד
The Netiv Ha’avot residents said they will hold a re-building ceremony on Thursday as a statement “of our intention and determination to stay here, in our homes.”They said that the reservists who plan to help them, “are our dear friends and a “symbol of the solidarity the nation feels to the settlement [movement]. We thank them from the bottom of our hearts.”

Six Israelis were arrested after the evacuation for throwing stones at Palestinian cars near the Netiv Ha’avot outpost in the Gush Etzion region, according to police.In the evening, several dozen teenage activists blocked the road by the Bridge of Strings near the entrance to Jerusalem and burned tires, according to police who cleared the road.The demolition of the shack comes as the outpost’s residents are in the midst of a campaign to avert a High Court of Justice ruling that 15 homes in their hilltop community must be destroyed in March – because, like the carpenter shop, they were illegally built on private Palestinian property.Early in the morning, several hundred teen and young-adult activists crowded around the shack and holed themselves up inside of it, so that the security forces would be forced to remove them. 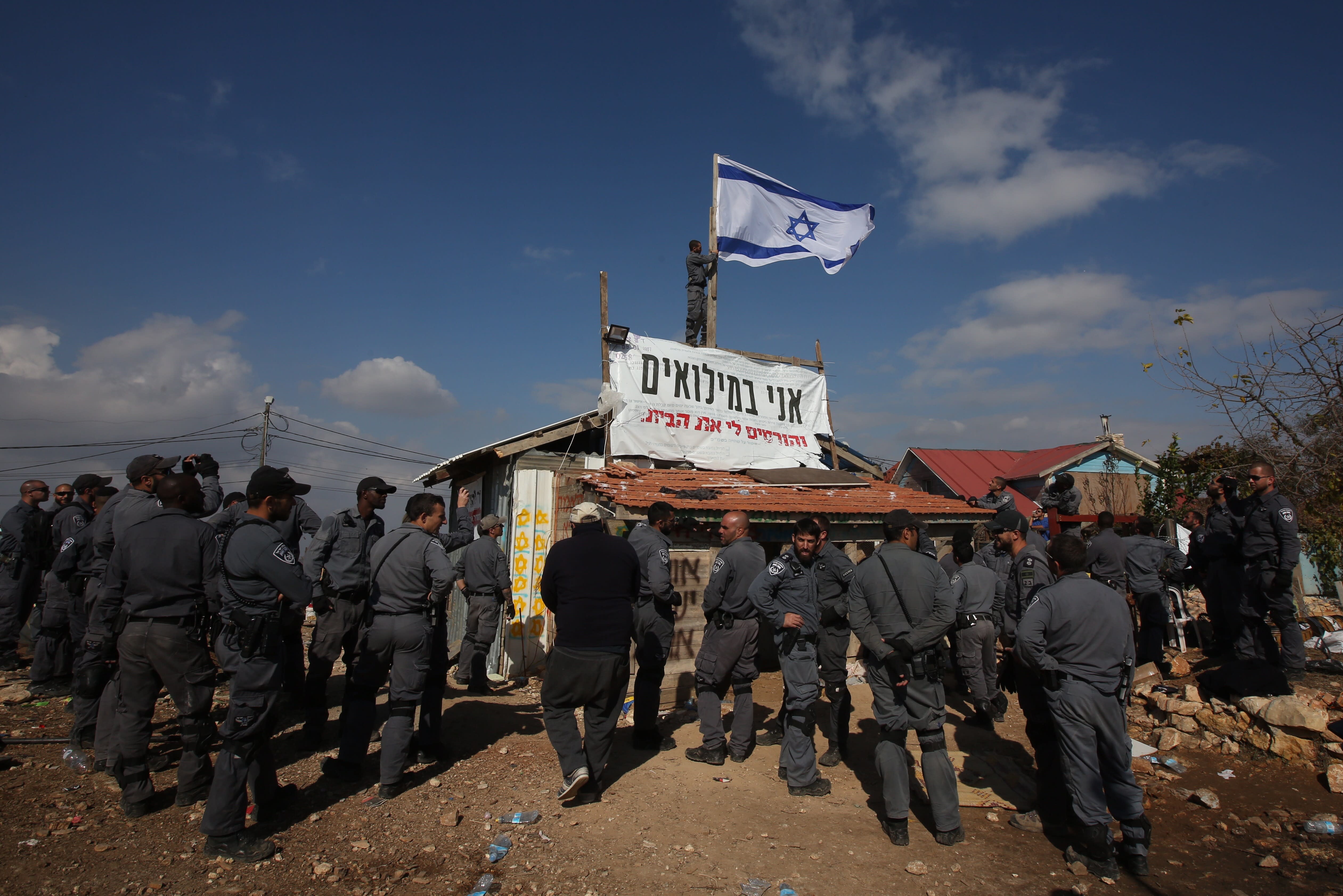 A mix of soldiers and border police cleared the area in front of the structure and surrounded it with barbed wire.Dozens of activists stood on the road behind it, watching as border police removed teens from the shack, either by carrying them or walking them out.A number of teens climbed on the roof, where they stood briefly next to a large fluttering Israeli flag, before they were taken down by border police. After the shack was cleared a border policeman stood on the roof with a crowbar and removed the flag.Civil Administration staff members then took off the roof before a crane knocked the structure down within 15 minutes.Teen activists periodically attempted to rush the site, but were held back by the border police.Some of the teens argued with the officers and urged them to resist their orders.“You are destroying the State of Israel,” one longhaired female teenager yelled at an officer, who tried to push her and other protesters away.“Why are you moving us? Are you afraid to hear the truth?” the teenager asked.An adult on the scene urged the teenagers not to act violently, warning them that it could damage their army careers and their entire future.Gitit Weizman, a young mother holding her one-year-old daughter Roni, sat on the ground nearby watching the demolition. She lives in one of the 26 Netiv Ha’avot homes on state land in the outpost, which the state plans to legalize. But her thoughts were with the homes of her neighbors slated for demolition in March.“This morning was very hard because it was only an example of what is going to be here in a [few] months,” she said.“It is so hard for us. It is just ridiculous to see how the structure here – [which] does not effect anyone – has to be destroyed, because of a stupid decision by the Supreme Court,” she said.“We ask [Prime Minister Benjamin] “Bibi” Netanyahu to step in. He has the power to change everything. He can make sure that we will not see such a destruction in a few months, not only of a workshop but of houses,” Weizman said.According to a spokesman for Netiv Ha’avot, the family who owned the carpentry shop, has six children and lives in a home that is slated for demolition. The family left the outpost during the demolition, he said.Gush Etzion Regional Council head Shlomo Neeman said: “The answer to demolitions will always be construction.”“It is very sad that we have reached this shameful moment of loss of control and power. We are told that this is the rule of law, [but] we say that this is the loss of power and the destruction of the law,” Neeman said.“Today’s sad sights from Netiv Ha’avot in the heart of Gush Etzion are the result of an unnecessary decision by the Supreme Court,” Culture and Sports Minister Miri Regev said. “Unfortunately, cold legal formalism overcame logic and justice.”