Netanyahu assures US: No change in status quo at holy site

Netanyahu decided to reopen the Temple Mount in stages starting on Sunday afternoon after he had taken the unusual step of shutting it down on Friday in response to the attack. 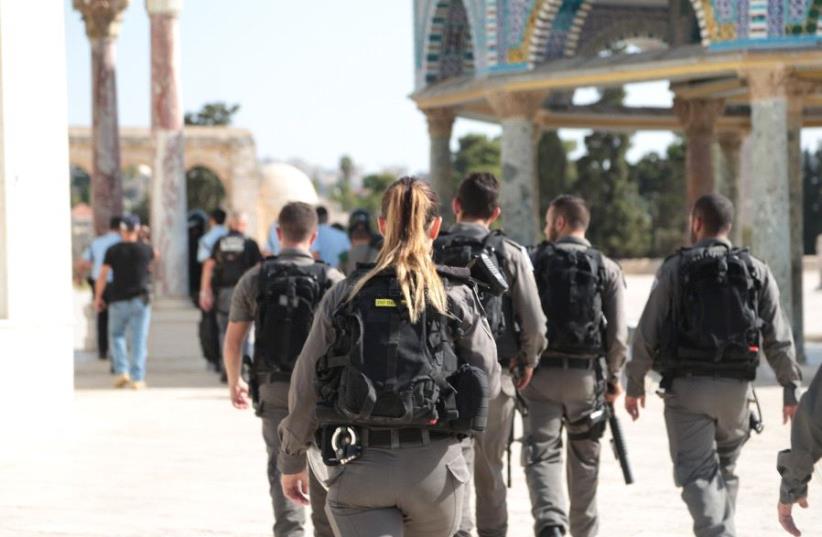 Border Police at sight of terror attack on Temple Mount July 14
(photo credit: ISRAEL POLICE)
Advertisement
Israel has assured the Trump administration and the Palestinian Authority that it has no plans to change the status quo on the Temple Mount, as Friday’s terrorist attack in the complex sparked fears of a third intifada.“The status quo will be preserved,” the Prime Minister’s Office said already on Friday in the immediate aftermath of the attack, in which two policemen, were killed, and another wounded, by three Israeli-Arab terrorists. Police pursued and killed them in an unusual shoot out in the plaza area on the Temple Mount, known to Muslims as the al-Haram al-Sharif.On Saturday night, before heading out on a five-day trip to France and Hungary, Prime Minister Benjamin Netanyahu held security consultations over the phone.Netanyahu decided to reopen the Temple Mount in stages starting on Sunday afternoon after he had taken the unusual step of shutting it down on Friday in response to the attack.Additional security measures will be taken to protect the area, including cameras outside the Temple Mount and magnetometers at its entrances.Netanyahu and Palestinian Authority President Mahmoud Abbas held a rare phone call, in which the Palestinian leader condemned Friday’s shooting attack, the official PA media agency Wafa reported.
Dramatic new footage emerges of Temple Mount terror attack, July 14, 2017. (Israel Police)
“The [PA] president expressed his strong rejection and condemnation of the incident that took place at the holy al-Aksa Mosque,” Wafa reported.“He affirmed his rejection of any violent incident [carried out] by any party, especially in houses of worship.”The PA president rarely condemns attacks on Israelis. Netanyahu told Abbas that there will be no change to the status quo on the Temple Mount, the Prime Minister’s Office said in a statement.A number of Palestinian leaders on Friday expressed concerns that Israel would exploit the attack to make changes to the status quo.The prime minister also called on all parties to calm the situation in Jerusalem. Abbas and Netanyahu last spoke in November after the PA sent firefighters to help put out fires around the country.According to Wafa, Abbas’s office spoke with Jordanian officials in an effort to reopen the Temple Mount, of which Jordan is considered the custodian.Israeli officials have also assured the Trump administration it has no intention of changing the status quo security arrangement, the White House said in a statement on Saturday.Describing the shooting attack that killed two Border Police officers as a “heartbreaking” act of terrorism, the US president’s press secretary strongly condemned the attack, which took place at ground zero of the Israeli-Palestinian conflict.“Yesterday, the Holy City of Jerusalem – which means ‘City of Peace’ – became a scene of terror,” the White House statement reads. “There must be zero tolerance for terrorism. It is incompatible with achieving peace and we must condemn it in the strongest terms, defeat it, and eradicate it.”White House Press Secretary Sean Spicer said: “The attack forced the government of Israel to temporarily close the Temple Mount/Haram al-Sharif to conduct its investigation.Israel has assured the world that it has no intention to alter the status of this holy site, a decision which the United States applauds and welcomes.”The president’s special adviser on international negotiations, Jason Greenblatt, similarly condemned the attack on Friday, praising Abbas for swiftly speaking out against the attackers.Even though the terrorists were Israelis from Umm el-Fahm, Greenblatt wrote in his tweet that he hopes “Abbas helps PM bring those responsible to justice.” Greenblatt, who tweeted that his thoughts and prayers are with the families of the victims, said, “We must defeat all forms of terror!” He also posted a tweet calling Hamas’s and Islamic Jihad’s celebrations of the attacks “Intolerable.”The UN and the EU also condemned the attack. “There can be no justification for such a crime or any act of terror. The EU offers its condolences to the families of the victims of the shootings.“Jerusalem is a city sacred to three religions. The status quo at the Temple Mount/Haram al-Sharif must be preserved. The EU calls on all leaders to condemn violence and all acts of terrorism when they occur, and to work toward restoring the dignity and safety of this holy site,” the EU representative said.As a result of Friday morning’s attack, the US Consulate-General in Jerusalem issued a rare directive to all US government employees and their family members to refrain from entering the Old City until Monday morning at 9 o’clock, unless they had prior approval.The statement recommended that “private US citizens take into consideration these restrictions,” in addition to the standing State Department guidance on travel to Israel, Jerusalem and the West Bank.Adam Rasgon contributed to this report.