‘With a knife in his heart, my son shot the terrorist’

Funeral held for Zvi Mizrahi, the IDF soldier killed in terror attack on Route 443‏
Advertisement
In the last moments before his death, Ziv Mizrahi fired at the Palestinian assailant who stabbed him in the heart, just as his uncle Allon had tried to stop a suicide bomber in Jerusalem 12 years earlier.“With a knife in his heart, my son shot at the terrorist,” Doron said on Tuesday afternoon, as he eulogized his son.Ziv, 18, was killed the day before in an attack at the Dor Allon gas station on Route 443, just a short distance away from his family home in the West Bank town of Givat Ze’ev.“That is how Ziv was. He is an Israeli hero,” Doron told the hundreds of mourners gathered at the Mount Herzl Military Cemetery in Jerusalem.He explained that the shot Ziv fired had saved the life of his female commander who was nearby. “We’re a brave family,” the tall, olive-skinned, silver-haired man said.Doron’s brother, Allon, was one of seven victims of a suicide bombing at Cafe Hillel in Jerusalem in September 2003. Allon, 22, was a security guard and had tried to stop the bomber.“My brother Allon could have fled, but he didn’t,” Doron said. “He exploded with the terrorist. He saved scores of people.“For 12 years I have mourned my brother. With that, I thought I had paid my dues. I am a bereaved brother,” he said, as he beat his chest with his fist. “We are a bereaved family. Enough! Today, I am also a bereaved father,” said Doron. He wore a black skullcap and his glasses hung down his black T-shirt.“We’ll mourn, but I promise you, next Wednesday I am returning to work. You won’t break our spirit. The Jewish people live,” he said.Ziv wanted to serve in the IDF close to his home, so he could remain with his family, said his high school teacher and adviser, Hannah.Last year he began training to be an army driver because he loved cars, she said.When senior year ended in the spring, the class made plans for their five-year anniversary.“I never imagined that our next meeting as a class would be at your funeral,” Hannah said.Ziv’s friend Liran said: “The terrorist who killed you, killed all of us. The knife put an end to so many things – your laughter, the trip you would have taken to South America. The knife took you out of hate. It’s ironic that the hate that never marked your life now marks your death.”Their group of friends, said Liran, will never be the same. “How do we continue?” he asked.Lidor said that his brother, Ziv, was a modest and happy person who was the glue that held the family together. “I love you so much. My heart is broken into pieces. I cannot describe the depth of the pain. I can’t believe that we are now parting ways.”His cousin Sivan explained that just a few months ago, Ziv had mourned the loss of his grandfather, and had been one of the rocks that the family depended on in the week after his death. “You spoke all the time of your army service and how you would work with cars. You also wanted to be close to your mother during that time,” Sivan said. 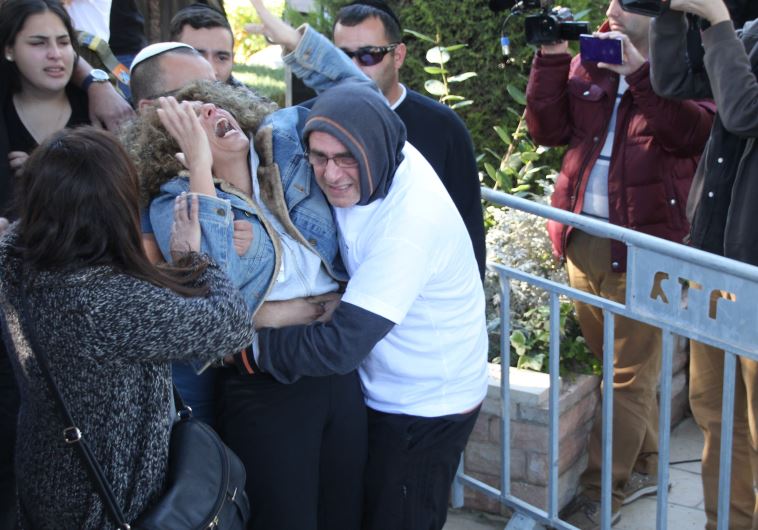 Ziv Mizrahi's mother at his funeral (Photo: Tovah Lazaroff)The two were so close that Ziv’s mother felt his death before she was officially informed of it. “Your mother felt her soul leave her body the moment you died,” said Sivan.Ziv’s mother walked into the cemetery behind her son’s wooden casket, which was draped in an Israeli flag and held aloft by soldiers. As they neared the grave, she paused, held her hands up to the sky and screamed her son’s name. “I want to die. I don’t want to live without you.”She burst into tears. Her legs seemed to give way underneath her, and two other mourners held her up, so she would not fall.

Tags ira and plo
Advertisement
Subscribe for our daily newsletter