Women and Jihad: The motivation of female suicide bombers

“Women are not supposed to blow themselves up... They are supposed to stay at home and give birth – 'preferably to boys' – and care for their families." 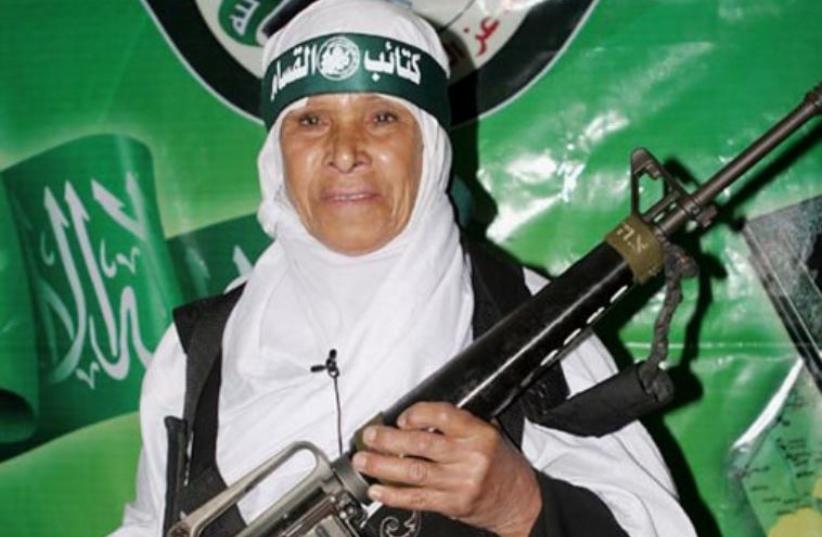 Female suicide bomber Fatima Omar Mahmud al-Najar, who blew herself up lightly wounding three Israeli soldiers operating in the town of Jabalia in 2006
(photo credit: AFP PHOTO)
Advertisement
Female suicide bombers were relatively unknown till the second intifada that began in September 2000.Dr. Mordechai Kedar, a senior lecturer in the department of Arabic at Bar-Ilan University, said Sunday that he had been surprised to discover that the perpetrator of an explosion in the bus in which he was traveling was a woman.Fortunately, he suffered only slight injuries and was able to take care of them himself. This was the first time that a woman had been involved in a suicide attack, he said. Casting his mind back after the incident, he remembered having seen her wearing a blue velvet dress – a garment worn only at weddings. “She was dressed for a wedding with shaheeds [‘martyrs”] in heaven.”Kedar, an officer in IDF Military Intelligence for 25 years, was speaking at the Begin Heritage Center at the launch of the Gefen Publishing House book Women and Jihad by Rachel Avraham, a news editor and political analyst for , the English language Internet edition of the televised Channel 2 News.“Women are not supposed to blow themselves up,” Kedar said. They are supposed to stay at home and give birth – “preferably to boys” – and care for their families. Blowing themselves up goes against the grain of Islamic society – at least it used to.Moderator David Bedein, whose Center for Near East Policy Research was a co-sponsor of the event, showed clips taken several years ago of interviews with Palestinian female would-be suicide bombers who had survived, been treated in Israeli hospitals and incarcerated. At the time of the interviews, there were more than a hundred such women, said Bedein. Today they are all free, having been included in the 2011 exchange for kidnapped soldier Gilad Schalit, he stated.In the interviews, the women expressed no remorse or regret. They had felt blessed just before embarking on their missions, because they were about to meet Allah and would see the martyrs in paradise. One woman, who had been badly burned and been treated and nursed back to health in Soroka-University Medical Center in Beersheba, had returned to the same hospital with an explosive belt strapped to her body. She was intercepted by security personnel. Some of the women were aggressive, saying that Palestine would be part of the large Islamic state. Others expressed admiration for al-Qaida’s Osama bin Laden and Hezbollah’s Hassan Nasrallah and said that they hoped that all Arabs would be like them. One woman said: “The base of the conflict between Jews and Palestinians is a religious struggle.”The faces of all the women, including the most highly educated, shone with a religious radiance that spoke of the depth of their indoctrination.Minister-without-Portfolio Ayoub Kara said that he has made a study of extremism, and while he has not yet found a solution, it is essential for Israel to cooperate with the Saudi-Arab coalition. He lamented the fact that the Saudis won’t make a move in that direction until the Israeli-Palestinian conflict is resolved.Libyan-born Dr. Yitzhak Ben Gad, a former Israeli consul-general in Chicago and Miami, while not discounting religious fervor as a springboard for female terrorists, said there were also other factors: a miserable life, the knowledge that sooner or later she will be killed in “honor” crime by a male family member; and revenge for real or imagined suffering.Dr. Nancy Kobrin, a fellow of the American Center for Democracy, psychoanalyst, Arabist and counter-terrorism expert, attributed knife wielding by female jihadists to their having been abused as women in the Islamic shame/honor culture. “Violence is embodied by female suicide bombers,” said Kobrin. The female is at the eye of the political terrorism storm. Incidents of domestic violence in Palestinian society, serve as "a red flag and a ticking time bomb,” she warned. “The need to hate and to have an enemy is in place by age three,” declared Kobrin “It is a rage that exceeds murder itself. There is a need not just to kill but to obliterate and annihilate – something that the West can’t understand.”Quoting from Avraham’s book, Kobrin said that female suicide bombers receive eight times more media publicity than male suicide bombers.Avraham stated that no act of terrorism is spontaneous. They are all carefully planned, and more than the desire to actually harm Israelis is the terrorists’ goal to attract publicity for their cause. Without publicity, it’s as if the act of terrorism did not happen, she said.She conceded that while there are Palestinian moderates, most are too afraid to express their true opinions. “We don’t know what Palestinian women are really thinking, because they are afraid of deviating from the norms of their society.”An increasing number of Palestinian women are becoming terrorists as a result of media incitement, she said, adding that women getting more publicity shames Palestinian men into committing greater violence