"The status quo is not sustainable and downside risks of further conflict and social unrest are high," study finds. 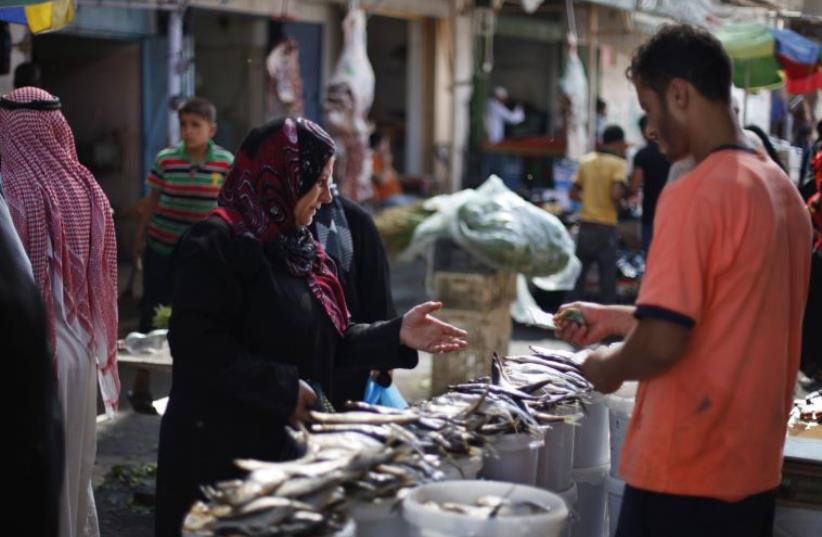 A Palestinian woman buys traditional fish eaten during Eid, ahead of the Muslim Eid al-Fitr holiday, at a market in Khan Younis
(photo credit: REUTERS)
Advertisement
For a third year in a row, average Palestinians have seen a deterioration in their economic situation, according to a World Bank study released Tuesday.Though the overall Palestinian economy has fluctuated in recent years, growing slowly before the 2014 Gaza war led to a drop-off and tepid recovery, a spike in population growth has meant that on a per capita basis, Palestinians have been getting poorer since 2013.A quarter of Palestinians live in poverty, and in Gaza, youth unemployment has hit 60 percent.“Against the backdrop of weak economic growth, reduced donor aid and temporary suspension of revenue payments by the government of Israel, the Palestinian Authority’s reform efforts have not been able to prevent another year with a financing gap,” the report said.An aid-dependent model was inadequate, the report continued.“In short, the status quo is not sustainable and downside risks of further conflict and social unrest are high.”Though the report concluded that the Palestinian economy would perform below its potential in the absence of a permanent peace deal with Israel, it argued that adhering to existing agreements could help boost the economy.“World Bank estimates show that granting Palestinian businesses access to economic activity in Area C (excluding the areas subject to final status negotiations) would boost the Palestinian economy by about a third and lower the PA ’s deficit by half,” the report said.If Israel was more regular and predictable at turning over tax revenues it collects for the PA , eased restrictions on movement, and let more goods out of Gaza, the Palestinian economy would benefit greatly.The report credited the PA with making its fiscal outlook more sustainable, but said it needed to reduce wages, which could lop off 5 percent of GDP from its spending, invest more in public infrastructure and take over tax collection in Gaza.