Is the site damaged by Palestinian road works Joshua's Altar?

"Even for those who do not believe that the altar was built by Joshua, in my opinion the site remains one of the most important in Israel from the period of the Iron Age I." 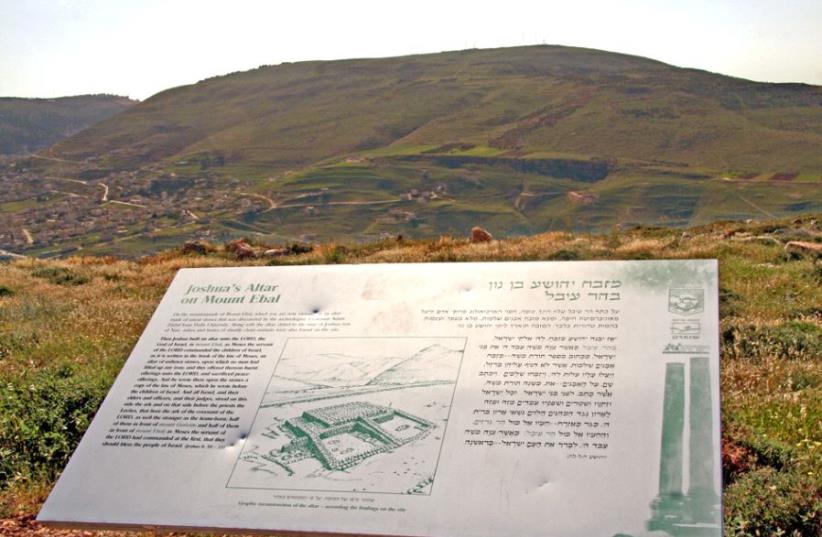 Mount Ebal and an explanation of its standing at the altar
(photo credit: TAMAR HAYARDENI)
Advertisement
In 1980, Haifa University archaeologist Adam Zertal was conducting a vast archaeological survey in the area of the city of Nablus, the biblical Shechem, in the West Bank, when a heap of stones caught his attention. He went on to uncover a rectangular structure approximately 9m. x 7m. long. Because of its character and location, Zertal was ready to proclaim five years later that he had uncovered the altar built by Joshua after the Israelites entered the Promised Land.
Four decades later, identification of the site among scholars is still controversial, and many scholars dismiss Zertal’s claims.
However, a few days after damage was reported in the area caused by construction works carried out on behalf of the Palestinian Authority, Dr. Shay Bar from Haifa University, who took over the work of publishing the site’s findings after Zertal’s death in 2015, stressed that several factors support his thesis, even if much more work is needed before he can give a definitive answer.
Mt. Ebal is mentioned in the Bible, in the books of Deuteronomy (27:4-8) and Joshua (8:30-35). The site is currently located in Area B of the West Bank under Palestinian authority.
“At that time Joshua built an altar to the LORD, the God of Israel, on Mount Ebal, as Moses, the servant of the LORD, had commanded the Israelites – as is written in the Book of the Teaching of Moses – an altar of unhewn stone upon which no iron had been wielded. They offered on it burnt offerings to the LORD, and brought sacrifices of well-being,” reads a passage of the Book of Joshua.
For those who believe that the Bible reflects historical events, what is described in the Book of Joshua took place during the Iron Age I (1200-1000 BCE).
Zertal based his understanding on the altar’s location, as well as its structure, which he said bore a striking resemblance to the altar that stood in Jerusalem’s Second Temple a millennium later.
The archaeologist was harshly criticized by colleagues for his presumption.
“Archaeological studies are based on two elements, data and interpretation,” Bar explained to The Jerusalem Post. “However, in order to offer an interpretation about a discovery, it is important to rely on complete data. The results of the excavation at the site have never been fully published. For this reason, many who have offered their views over the years, have done so without looking at the complete picture.”
The archaeologist said that most scholars agree that the site dates back to the Iron Age. In addition, many believe that it was indeed a cultic site – even though some suggest that it was not an altar but possibly a tower to guard the surrounding fields.
The remains consist of a well-built structure  abutted by two courtyards. A ramp located between the courtyards reaches the top of the structure.
“We could see the same arrangement in the later altar in Jerusalem,” Bar pointed out, adding that the structure is surrounded by some 30 installations, filled with jars and animal remains that might have been brought there as offerings to the priests.
“I am not ready to give an answer on whether Joshua was the one who built this site, because I believe it would be unethical to do so based only on partial data,” Bar said. “However, I would say ... in the current state of research, if I look at the architecture and the pottery, and the other findings it seems to me that we are indeed talking about a cultic site from the relevant period... All Mount Ebal has been surveyed meter by meter for the past 45 years by the Menashe Hill Country Survey team under Professor Zertal and later myself. Other than this structure, the hill is almost completely bare. People did not live here, there are no water sources, it would be hard to cultivate this area. But in the Iron Age, someone, maybe Joshua, maybe someone else built a very imposing site with a great view towards north and east.”
“The Bible speaks about an altar built there, and it is the only source available, so it seems possible that this was indeed Joshua’s altar, even though we cannot know for sure. We need to carry out more work to verify it,” Bar added. “Only then will I be able to give a better answer.”
Regarding the damage, Bar said that nothing critical has been destroyed yet because it only involved the external part of the site, and not the ancient structure itself, but he did express concern about what could happen without proper protection and supervision.
The damage was caused by workers who were building a road connecting the town of Asira ash-Shamaliya with the nearby Palestinian city of Nablus.
The municipality has apologized for the damage which it said was accidental.
“We are currently working on renovating the road that connects the village with the eastern part of Nablus,” the municipality said. “The work is being carried out by a private contractor who apparently caused damage to a wall near the road. The contractor will repair the damage, which was caused unintentionally.”
On Friday, President Reuven Rivlin called on the IDF to investigate the damage.
“The reports of damage to the altar site... concern me deeply, and I am writing to you to thoroughly investigate the case to ensure no further damage is done to heritage sites,” Rivlin wrote in a letter he sent to Alternative Prime Minister and Defense Minister Benny Gantz. “Our land has a bounty of holy sites of immense religious, historic and archaeological value. These sites, including the altar of Joshua... are heritage sites of incalculable national and universal value.”
“Even for those who do not believe that the altar was built by Joshua, in my opinion the site remains one of the most important in Israel from the period of the Iron Age,” Bar concluded.
Tovah Lazaroff and Khaled Abu Toameh contributed to this report.