Cultural e-commerce site Omanoot aims to expose Israel's diversity to the world, in an easy and affordable way.

By YONI COHEN
SpacemanTrampoline
(photo credit: Noam Chojnowski)
Advertisement
"In the age of YouTube and iTunes - how is there not a platform promoting Israel for the arts online?" This is the question that prompted Edoe Cohen to turn his educational Israeli arts website into the "first cultural e-commerce site, with Israel as the main focus." Omanoot, which means art in Hebrew, started a few years ago and was inspired from Cohen's experiences in New York as a student activist. He was involved in Israeli cultural advocacy by bringing Israeli bands to perform at his university. Cohen, who grew up in the US to Israeli parents, moved back to Israel at the age of 15 where he studied film in high school, which he recounts as his entry into the art world. After studying in the US, he returned to Israel and worked at the Foreign Ministry as a legacy heritage fellow. It was during this fellowship that he initiated Omanoot.In its first incarnation, Omanoot began as a non-profit start-up that educated people about different aspects of Israel through the window of the arts. "We faced a lot of challenges as a start-up," Cohen tells The Jerusalem Post. While he is proud of the start-up's success and notoriety as web platform, he has big plans for the future. "Within the Jewish world, a lot of people know about the brand. Now we want to take a standard business model of e-commerce and offer an attractive platform for Israeli artists."According to Cohen, Omanoot is much more than a website selling Israeli art. For him, it is a vehicle to allow people to connect with Israel’s diverse culture. "When people come here for the first time, on trips such as Taglit, they don't fall in love with the political situation, with the Knesset, or with Bibi [Prime Minister Binyamin Netanyhau]," explains Cohen. "Instead they fall in love with Tel Aviv, the people, the culture. By engaging with contemporary Israeli art and culture, people can be Jewish in a way that they have never seen before."
Maya Gelfman - Mind the Heart! from OmanooTV on Vimeo.
As an Internet-based enterprise, Omanoot is able to reach out to people all over the world. "It's a great idea to bring everyone to Israel but it's also even better to bring Israel to the world," says Cohen.With Israel being as diverse as it is, showcasing the country's culture through art is a multi-layered task. "It's all about showcasing diversity, whether it be ethnic, age-based, religious, or regional," explains Cohen. "That is Israel. Israel is not just blue and white."In order to take on the all-important task of exposing Israeli culture through art, Cohen enlisted the help of two very enthusiastic women, Lee Rotenberg and Alexandra Schinasi. While the two women came from different backgrounds, they shared Cohen's vision of using art to promote Israeli diversity.Rotenberg was blogging about the art world when she became frustrated by how difficult it was for artists to reach customers. Schinasi, originally from Switzerland, came to Israel a year ago to work on a film project. After finding herself overwhelmed by the amount of culture and art Israel had to offer, she wanted to launch a website and share abundant art with the world. She met Rotenberg by chance and mentioned that she found it a shame that it was so hard for global buyers to access Israeli art. Rotenberg noticed the similarities in Schinasi's and Cohen’s thoughts and facilitated the introduction. 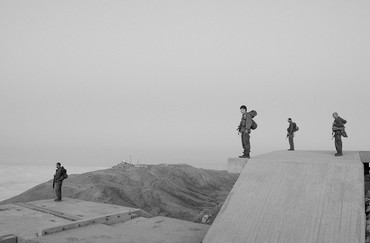 Thus the trio was formed, equipped with the common goal of bringing Israel’s vibrant and trendy art scene to the wider world. With Schinasi's European background, Lee’s US connections and Cohen’s Israeli roots, the team felt confident that they had most angles covered.Diversity is the central theme of the project. By creating a dialogue through art and allowing different cultures from within Israel and the wider region to share ideas, groups who usually have little interaction were given the opportunity to begin communicating. "We are setting up a collaboration through art," explains Rotenberg.Art Peace, a new project they are working on,  showcases art from neighboring countries, such as Egypt and Jordan. "We are actually part of a neighborhood here in Israel - we are not an island. We are trying to build bridges through art," explains Schinasi.While finding artists from within Israel to share their work was not a problem, encouraging artists from the region to get involved was more challenging, explains Schinasi. In light of the social-media facilitated trend of regional collaboration - such as the Facebook group "Israel Loves Iran" - the Omanoot team posted messages in Arabic on different forums and received some encouraging feedback. "'Palestine Loves Israel' loved the idea and they promoted it on their page," says Schinasi.The first piece of art sold on the recently-launched website was a photograph of a crucifix taken in Israel by a non-Jewish person from Europe. "The photographer came to Israel for a visit and she left a big advocate," explains Schinasi. "Once you get a taste of Israeli culture you become addicted."Arab-Israeli artist Christina Bullata from Jerusalem is more than happy to be a part of the project. Bullata describes herself as "the kind of person who likes to make a difference in this world," which lead her to apply for a coexistence program in east Jerusalem in 2008. During that year, she met a cousin of Schinasi's. When she heard about Omanoot, Bullata says she was very interested in the project because it offers a great opportunity for new photographers like her to establish themselves.The aim of showcasing Israel  extends well beyond Israel's diverse populations and indeed the Middle East. The team has featured photographs taken in India by Israeli photographers. According to Cohen, this is a way of showing Israel's perception of the world through art, and not only Israel through art.While anyone can submit their artwork to the site, there is a very a strict selection process, explains Rotenberg. "They don't have to be professional photographers necessarily, but they the photos must be of a high quality." This strict yet informal process distinguishes Omanoot from other Israeli art sites, as it makes the artwork featured more affordable. The vast majority of the images on the site can be brought to people's houses all over the world for under 25 dollars.While the photos are shipped to Europe and Israel from within Israel, Omanoot also has a facility in the US, which allows people in US to purchase the art. "People in their 20's of any budget can have Israeli art at their home," explains Rotenberg. "You no longer need to come on Taglit to come to Israel."Follow @JPost_Lifestyle