The Weekly Schmooze: Stop the War on Purim!

Jewish culture news worldwide: The Daily Show takes on racist costumes; Andy Samberg off the market and Jason Segel is back on.

By LAHAV HARKOV
weekly schmooze 311
(photo credit: Courtesy)
Advertisement
Purim came and went, but the scandals of the day still remain. After all, the Oscars were the same day!But the Jewish holiday itself managed to stir up some headlines in the states, when Brooklyn Assemblyman Dov Hikind decided to put on an afro wig and be a black basketball player for Purim. "The Daily Show" host Jon Stewart had a lot to say on the topic, expressing incredulity that someone who fights anti-Semitism would think it's okay to be racist on Purim, while correspondent Jessica Williams did a segment on "the political left's War on Purim," which is a "low-down dirty shanda," using a gragger (noisemaker) anytime Stewart mentioned Haman.
The Daily Show with Jon Stewart
Get More: Daily Show Full Episodes,Political Humor & Satire Blog,The Daily Show on Facebook
The Daily Show with Jon Stewart
Get More: Daily Show Full Episodes,Political Humor & Satire Blog,The Daily Show on Facebook
As for that other thing that happened on Purim, you know, where lots of actors got all dressed up, but not in costume, Seth MacFarlane got into a lot of trouble with the people who run Hollywood. You know, the Jews. According to MacFarlane's logic, or that of the CGI foul-mouthed teddy bear Ted that he voices, you can't survive in show business if you're not a Member of the Tribe. If so, then why would he go about offending us? In any case, the Anti-Defamation League is not happy with Ted's jokes, but The Schmooze is presenting them for readers to judge for themselves. Of course, MacFarlane managed to offend half of the humans in the world, as well, by being consistently misogynist, but that's a topic for another site.     For the stars who usually don't make it to the Academy Awards, there's another honor: the disco ball trophy. Everyone's favorite Hava Nagila gymnast Aly Raisman will try to claim one of her own on the next season of "Dancing With the Stars" in the US. We all know Raisman is flexible and has rhythm – after all, she's a gold-medal-winning Olympian – but she'll have to prove she can dance, too. Here's a reminder of Raisman's skills from the 2012 Summer Games.      In the latest gossip, ex-SNL comedian Andy Samberg is off the market. He got engaged to his girlfriend of five years, musician Joanna Newsom, who was spotted with a diamond ring at the Independent Spirit Awards last week. Mazal tov! 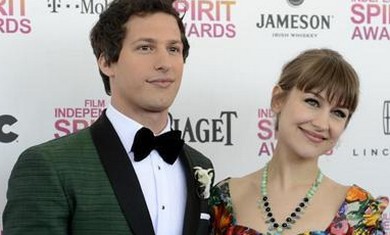 Meanwhile, "How I Met Your Mother" star and Judd Apatow film regular Jason Segel is available again, after breaking up with actress Michelle Williams. The two called it quits because of difficulties in their long-distance relationship; Williams lives in New York with her daughter Matilda, and Segel resides in Los Angeles.  Natalie Portman's stomach-camoflauging, empire-waist dress at the Vanity Fair Oscar Party sparked rumors that she may be pregnant again, since she wore similar styles last time she had a bun in the oven. Aleph, her son with her ballet dancer and choreographer husband Benjamin Millepied is two years old. 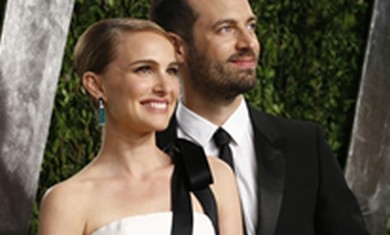 Last but not least, Buzzfeed presents 16 annoying things about keeping kosher, to much hilarity. Now, the author has a (literally) unorthodox idea of what kosher means, but anyone who keeps Jewish dietary restrictions to any degree will understand what she's talking about.

The Weekly Schmooze collects the hottest Jewish culture news from around the world. Ranging from celebrities to philanthropy to quirky communities, we're here to schmooze about Jews.
Advertisement
Subscribe for our daily newsletter