Working in the territory 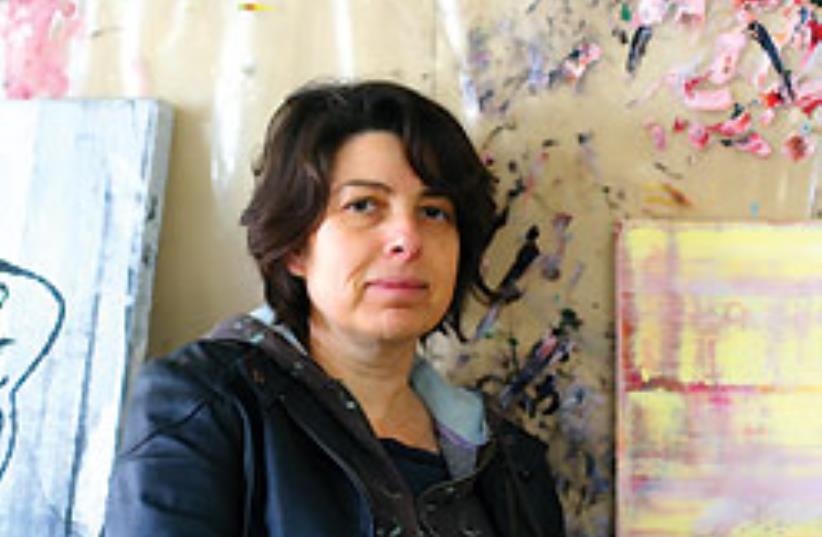 The artist. 'Because of my interest in line, I was always a good drawer, but I had an idea that you are either a drawer or a painter,' she says
(photo credit: Michal Lando)
Advertisement

Sharon Poliakine's studio in Rishpon, not far from her home in Ra'anana, has all the markings of a still-life painting - tubes of paint, water bottles, knives, gloves and plastic sandwich bags stained with a black residue of paint form a series of scattered mounds in the wide open space.

The artist. 'Because of my interest in line, I was always a good drawer, but I had an idea that you are either a drawer or a painter,' she says.Photo: Michal Lando

This is not a place to "sit and talk," Poliakine warns me on the phone before I arrive on a recent Wednesday morning. It is where she goes to work, which these days is far from regular - she squeezes it in between being a mother, teaching and running the University of Haifa's art department.

Though the space is rugged and has been flooded by rain, her current studio is the workspace she "loves most."

"It's like a landscape - I am working in the territory," says Poliakine, who often paints on large canvases that require a fair amount of space and physical labor. "When I wanted to organize the studio this morning before you came, I decided to do it halfway because I wanted to keep the landscape as it is."

Over the last few years this landscape has begun to serve as fodder for her work - scattered bottles of paint, brushes and some of her handmade tools have become props for her painting. She began drawing the objects in her studio for a series of still-lifes that reflect a recent transition toward figurativity. If her earlier works were characterized by textured abstractions in which paint was used to cover up drawings, her recent paintings no longer feel the need to cover up.

This shift in style is reflective of an overall transformation in Poliakine's life; she is reveling in a period of rebirth both personally and professionally. It's been a gradual process, but reached a high point this past year when a number of "good things" coincided: She was made the head of the art department at the University of Haifa, she moved to a new gallery (Gordon Gallery) where she had a very successful exhibit in February and, after a long, somewhat scandalous courtship, she moved in with her partner, Osnat Zukerman Rechter.

POLIAKINE, 44, sees this recent flowering as part of "growing older" and becoming more comfortable with herself. "I didn't want to cover up anymore," she says. "Maybe it's a matter of age, of saying 'that's what I do, that's what I am.'"

She is referring both to her personal life - moving in with a woman - and her artistic persona. Poliakine has been exhibiting her paintings since the late '90s, but it is only in the last few years that she began to foreground drawing in her paintings.

"Because of my interest in line, I was always a good drawer, but I had an idea that you are either a drawer or a painter," she says. "I was always drawing, but covered it up with layers of paint so you only saw hints of what was underneath. Then at a certain point I decided that no matter what, even if my drawings are really bad, I will show them, bring them to the front line."

What has emerged through this process are hints of her past and her artistic beginnings. During her first year at Bezalel, Poliakine fell in love with the process of etching, and went on to run the Jerusalem Print Workshop, where she instructed many of the country's best-known artists in the process of printmaking, for 15 years.

On the side she always painted. But it wasn't until the late '90s that she started to exhibit what she calls her "pure" paintings.

"I think my first painting was an attempt to imitate covering a metal plate with an oily liquid that drips down, like the process of printmaking; that was 20 years ago," Poliakine says.

Today, she is largely a painter, but many of her paintings feature printmaking in one form or another: Some are direct homages, and others are characterized by thick lines that are reminiscent of etching.

"I don't think it's a question of what I am more, painter or printmaker, there is no difference," says Poliakine. "I came to art through printing. I gained some themes from printing and adjust them to painting, not one instead of the other."

Over the last three years, Poliakine's work has undergone a dramatic transformation. Her paintings have shifted from abstract to figurative. This shift emerged out of a growing interest in still-life, and her growing role as a teacher (she teaches painting at Haifa and printmaking at Shenkar).

"The question of seeing bothered me a lot," she says. "I see young students drawing from 'imagination.' What is that? In the end, you can't do anything that doesn't exist in the world. Imagination is just an excuse for not looking, not practicing the connection between seeing and the hand."

THIS TRANSITION dates back to shortly before the Second Lebanon War, when she began a series of war images based on paintings by the Old Masters. In ink on paper Poliakine drew reproductions of battle paintings by Paolo Ucello, Piero della Francesca, Rembrandt and others. Then she photocopied them onto transparencies and projected the images onto canvases which she painted in oil. The process is a play on traditional still-life painting. Here the still-life is a painting by an Old Master that Poliakine takes apart and rebuilds, a process of deconstruction that eventually results in an original image.

She was looking for a way to create lines in her paintings that resemble etching. To do so, she created her own tools, among them her "Nicols" - plastic sandwich bags ("the kind kids take to school with them") that she fills with paint and squirts through a hole in the corner. The result is a thick line that appears in most of her figurative paintings.

"This is not a gimmick, I was looking for a line that has no trace of a brush stroke. Because of my history with etching, I am very sensitive to lines. The line is a physical thing that is scratched in metal and filled with ink - lines get body."

The result was paintings that in both form and content are homages to printmaking.Rain and Wind, a large oil painting that the artist affectionately refers to as "female printmaker," features a 16th-century print workshop based on an old engraving. The painting is covered with black diagonal lines of rain that end in a halo-like circle surrounding the head of the printmaker. The other, a hectic, busy painting titled An Image I Have Gained Honestly is a close-up of the former, and zooms in on the lower body of the "female printmaker."

Poliakine points to the thick and muscular hands of the printmaker in the paintings, which she identifies with her own. "These are self-portraits; they are really expressing, defining quite clearly the place I'm working from. The workshop is a place inside me, my entire body language is influenced by that profession."

Poliakine's battle paintings, which have evocative titles such as Surrender and Empty Skies, eventually gave way to a series of slightly more personal still-lifes. This group, based on drawings she did of rotting cyclamens, were a tribute to artist Moshe Gershuni, who painted the Mediterranean flower in a series during the 1980s. "It was a way to close the circle with one of my fathers," she says.

LIKE MANY of her paintings, Poliakine's cyclamens explore themes of life and death, both on a personal and national level, and sexual identity and are recognizable by her signature style - thick lines that provide an outline, a kind of skeletal sketch. These distinct lines leave open the question of what lies between them: Is the space empty or full? Dead or alive? The questions resonate on a number of levels.

Beginning in the winter of 2007, Poliakine kept pots of cyclamens on the table in her home in Ra'anana where she does most of her drawing (she paints in her studio in Rishpon). She continued to draw them that summer, and then the following winter. But by the time that second winter rolled around, the flowers had withered and their heads began to droop. Poliakine drew the dead flowers, and turned them upside down. "They looked much more erect than when they were alive, like soldiers with swords," she says.

She sees her dead cyclamens as her personal Vanitas paintings, which, like the originals from the 16th and 17th centuries, serve as symbols of life's transience.

"Painting always has to do with death," Poliakine explains. "All you can do is get close to it, or far from it, and there are many moments in the act of creation that you play with the distance. When you paint and it works well and you are really into it you get the feeling of fullness, like a bubble that floats. But then it will explode and that is also a kind of death."

Sharon Poliakine's work is being shown at Kupferman's House at Kibbutz Lohamei Hagetaot. (04) 993-3792/869, alongside work by Moshe Kupferman and Ido Barel.
Advertisement
Subscribe for our daily newsletter